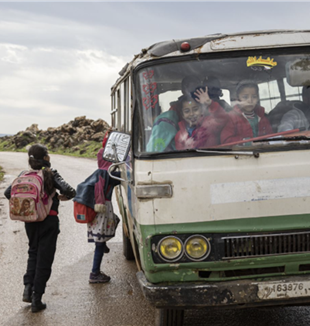 "Dear Teresa, I broke my hand playing with my brothers but do not worry, I am fine. How are you in Italy? Are you afraid of Covid? Make sure you take care of yourself!" Mohammad is a Syrian child who lives with his family in the Marjayoun refugee camp in southern Lebanon. The virus has reached there as well and Mohammad is forced to stay at home, which for him is a tent of a few square meters without a toilet. Yet, he is worried about the news coming from Italy where Teresa lives, who for some years now has become his "godmother" through the long-distance support provided by AVSI. In the letter, he designed a colorful house that protects her, with the words "your home is safe." It is the simple and very human gesture of a child that enfolds the strength of the bond generated by distance support, an embrace that holds together people that are only geographically far away. Teresa is moved and incredulous: Mohammad, from his tent in the refugee camp, is worried about her. She replies that she is well, and that she hopes they can meet one day, perhaps in Syria, when this emergency and the war that forced Mohammad's family to flee will be over. 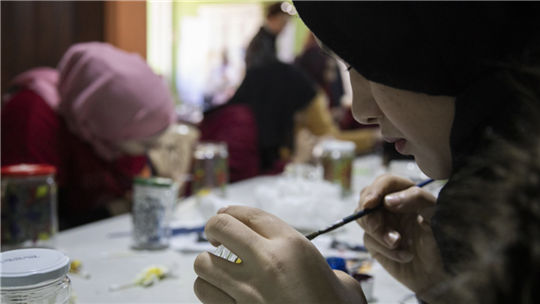 Marjayoun is a district in Lebanon bordering Israel where one of the projects launched by Avsi for this year's Tents Campaign is focused, to help 1200 children and their families through distance support. "In this period of emergency, we have modified our actions in order to continue to ensure that we can accompany children who at this time need even more care and attention," says Chafica Abdou Kahale, head of the AVSI project. The aid is mainly for Lebanese children, but young Syrians also benefit from it: tuition in English, French, Arabic, mathematics (carried out "remotely", with the teacher sending the exercises to a parent's cell phone), the distribution of educational material, food and hygiene kits, and a social worker organizes puppet shows and a "reading club" where they read fairy tales. "Two telephone lines have been activated for families, with two of our psychologists to offer support and advice to families during this long period of quarantine. We have also organized an awareness campaign via WhatsApp, telephone and on social media about hygiene and the health regulations to be followed during the pandemic, and for the distribution of food parcels to the poorest families."

Lebanon is experiencing a very burdensome economic and political crisis, aggravated by Covid and the explosion that occurred on August 4 in the port of Beirut; in addition to causing 200 deaths and the destruction of hundreds of buildings, it has generated a knock-on effect throughout the country by halting economic activities, leaving tens of thousands unemployed. More than half of the population lives below the poverty line, which makes relations between the local population and refugees more tense - one and a half million Syrians and 300,000 Palestinians, numbers that, given the context, make the provision of basic services even more complex.

AVSI, which had been working in Lebanon since 1996, has been operating in the Marjayoun district since 2006, which until 2011 was inhabited by 6,000 Christians and 25,000 Shiite Muslims. Since the beginning of the conflict in Syria, 10,000 Sunni Muslim refugees have been added to this, mostly from Idlib and living under the UNIFIL mandate, the UN military interposition force.

In addition to meeting the essential needs of food, health care and education, some income-generating activities are also promoted. "With the Covid emergency, we have involved groups of women in the production of masks that are delivered to the municipalities, while the men are engaged in agricultural activities," explains Marina Molino Lova, head of AVSI in Lebanon. "Specifically, in a few months, an initiative will begin that was agreed with two local entrepreneurs, one Christian and one Shiite, who made an effort to distribute portion of the agricultural production to the parish and the municipality, who will then deliver it to the Lebanese and Syrians. The work will be paid by means of the "cash for work" method: every day is worth 6 dollars (about 50 thousand Lebanese lira)."

Meanwhile, construction of Fada2i, the "Casa Avsi" designed free of charge by Italian architect Mario Botta, continues; it is destined to become an educational, cultural and professional reference point for over 100 thousand people. "Above all, it will be a place where to witness the possibility of a fruitful coexistence between people of different faiths and cultures," comments Marina Molino Lova. "It is the message that Lebanon, despite many difficulties and contradictions, has transmitted to the world for centuries. Now more than ever there is a great need for it."#AVSItents2020

Proximity is not measured with a ruler
The great enterprises of Asna and Jean Claude
Mireille and the wishes of her young people
Mexico, saved by the beast
During the pandemic, with the most vulnerable families