Jean Claude understood that he had to follow his coaches and trust reality. Asna indulged her creativity and began to value her story. This is how the gazes of a boy and a girl from Bujumbura, the former capital of Burundi and the main economic center of one of the poorest countries in the world, widened. Jean Claude and Asna are two of the more than a thousand young Burundians who have been joined in their growth by the AVSI "Art Project", and supported by the 2020-2021 campaign, with the theme "Widen your gaze. Hope beside those in need."

"In 2015, after the clashes that took place after the presidential elections, many young people were identified as agitators and had to abandon their families (for those who had one), leave their school, city," explains Andrea Sovani, head of the project: "Then, between 2016 and 2017, the political waters calmed down and the fugitives were able to return."

Thousands of young people left alone, the majority in the middle of the street. AVSI has begun to look for the most vulnerable - orphans or sick people. Their proposal? To learn a trade in a few months thanks to a training course and an internship. Many have found a job. Above all, they have discovered things about themselves that they had not imagined, skills they did not know they possessed, human and creative skills that have changed their lives. "We took in young people aged 16 -25 years old. Parishes and local authorities in the neighbourhoods most at risk have helped us in our selection.” 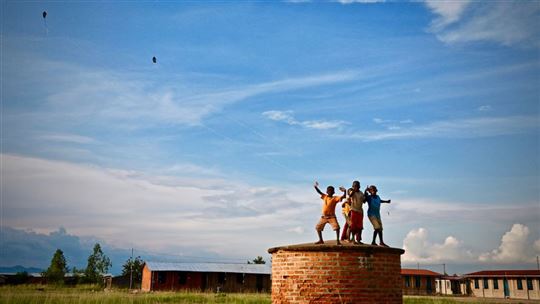 When the missionary center that welcomed him in rural areas of the country had to close, due to lack of funds, Jean Claude, an orphan, found himself on the street in Bujumbura at the age of 12, alone, living off what he found. Then, around the age of 20, he fell in love and had a child with his girlfriend, but she abandoned him and left him alone again this time with a child and without work, without anything. He heard about the Art project and tried his luck. Several professions were proposed: baking, catering, soap-making and cleaning, mechanics, commerce. Jean Claude chose to study to become a baker: a four-month course and a five-month internship. "The young people who do better are those who have had a more difficult story," says Andrea: "It is impressive. But it is understandable. Having to get by, maybe from a very young age and for several years, they acquire skills that they are not aware of and which lead them to risk more, to be more curious. Jean Claude is one of them.”

And during the internship, his character came out. His boss already had many bakers in his shop. So at the beginning Jean Claude was asked to do something else. He dedicated himself, showing total willingness to do small jobs, deliveries, sales, and even guard shifts at night. Eventually, one of the bakers left and he was hired. Now he has a salary and is able to take care of his son, who has grown up and goes to school. "Looking at him, the thing that amazes me is that he is aware that he has value. The educational path has also fostered a human development in him."

Asna, also an orphan, mother of two children, lived with her aunt until she died leaving her in charge of an extra child. "It is the other side of the coin. She has shown us that betting on the freedom of the person should not be taken for granted, in the end it is fruitful.” She has also trained to become a baker, but at the end of her internship, as a woman, she has not been able to a job in a bakery in the city.

What did Asna come up with? "She cultivated a small field before starting the Art project. She knew some farmers and talking to them, she came up with the idea of opening a small stall to sell cabbage and other products, right outside the local market. One day, one of our agents was at the market looking for another young person from the project. He met Asna, whom he did not know, and bought a cabbage, not because he needed it, but because he was impressed by the girl's ability to engage him, to present her products to him. On the way back to the office, he suggested that we train her in sales.” In the subsequent months, "we realized that she had the creativity and mind of an entrepreneur. She earned enough money to get a stall inside the market and began to exclusively sell cabbage, with an innovation – she cut them on the spot, an "express cut", delivering them to customers ready to make a salad. In a short time, her business became the most popular stall at the market. Everyone wanted her cabbage. So much so that at a certain point the other sellers began to copy her, selling ready-to-eat vegetables." Watching Asna has "taught us that although we organize a program, taking care of every detail, analyzing every possible variable, in the end we have to leave room for the person." 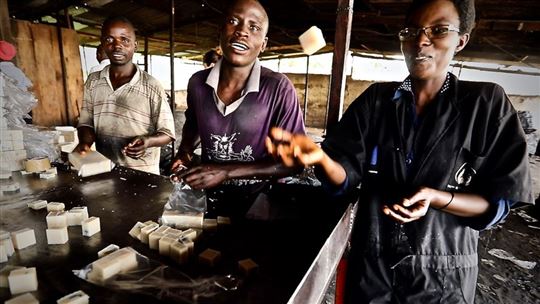 Jean Claude and Asna have widened their gaze in two different ways, explains Andrea. "Jean Claude became aware of who he was and began to move in the world of work in a way that enhanced everything we had taught him. He followed every step perfectly and committed himself to everything, succeeding in achieving his goal. For seven years, he had not been able to get off the street, with us he did so in a year and a half. Asna, instead, was the one who opened his eyes to us."

Of course, there are problems. Already during the first phase of the project, from August 2017 to August 2020, one of the first barriers for the young people was not being able to work, having to study. "In the northern area there is a landfill. Looking for iron and selling it means earning a thousand francs a day (33 cents). Going to school means losing important earnings. That is why one young person had stopped going. He is not the only one. We have come up with a thousand ideas to encourage them to participate in the courses, guaranteeing them one meal a day, and then adding an extra to account for public transport costs. There are those who really used this money to get the bus to get to us, but there are those who put it aside to do something else. Asna, for example, used it to rent her first stall outside the market.”

In November 2020, the project will start a second phase. "We want to develop actions in support of single mothers," says Andrea: "Here in Burundi, if a woman has a child with a man who then abandons her, she is automatically marginalized by her family. We have taken in several single mothers, and it has been very difficult to help them enter the job market. We have already started to be more present in the mediation between families. In some cases, we have managed to achieve a reconciliation, and this is also useful from a practical point of view, as both studying and working, the girls now have someone to leave their children with." The objective of this second phase is the schooling f young mothers to promote their emancipation from work. "It is not easy for them to be hired by an entrepreneur, that is why we orient them to create their own business. We already have some encouraging examples, in addition to Asna. Another girl began by selling rice in the morning, then she realized that she was free at lunchtime so she could cook it and sell it to workers on their work lunch break. With the earnings she bought some pigs. Step by step, she has increasingly expanded her small business."#AVSItents2020

Syria: Proximity is not measured with a ruler
Mireille and the wishes of her young people
Mexico, saved by the beast
A fruitful coexistence for Lebanon
During the pandemic, with the most vulnerable families