About CL
Communion and Liberation, in its essence, is a proposal for education in the Catholic faith. It is an education that doesn’t end at a certain age, but lasts a lifetime because it is always being renewed and deepened. The same is true of the Gospel, which reveals new discoveries even after we’ve heard it a thousand times. The same is true in the experience of love, of artistic creativity, and even in the simplicity of everyday life. The search for what is true, beautiful, and good, and for happiness is never-ending. This is Christianity: the adventure of life, not a kind of training for life.

The Christian Fact
Where does an experience like CL come from, and why?
This is what Fr. Giussani wrote to John Paul II in 2004: “Not only did I have no intention of ‘founding’ anything, but I believe that the genius of the Movement that I saw coming to birth lies in having felt the urgency to proclaim the need to return to the elementary aspects of Christianity, that is to say, the passion of the Christian fact as such in its original elements, and nothing more. Perhaps it was precisely this that awoke the unforeseeable possibility of encounter with personalities of the Jewish, Muslim, Buddhist, Protestant and Orthodox worlds, from the United States to Russia, in an impetus of embrace and appreciation of all that remains of truth, of beauty, of good and of right in whoever lives a sense of belonging.”

Reason First and Foremost
This is what happened and continues today. Fr. Giussani began his life as an “educator of Christianity” in 1954, when he began as a religion teacher in a public high school in Milan, Liceo Berchet, “his heart bursting with the thought that Christ is everything in the life of man.” He amazed his students with his proposal directed first and foremost to their reason and their freedom, by his invitation to encounter beauty – music, poetry, nature – and by his capacity to reach the depths of the human heart, and the elementary needs that constitute it.

A Method for Judgement
With these words, Giussani summarizes the entire scope and nature of his efforts: “Since my first hour in the classroom I have always said: ‘I am not here to make you adopt the ideas I will give you as your own, but to teach you a true method for judging the things I will say. And the things that I will say are an experience, which is the outcome of a long past: two thousand years.’
Respect for this method has defined our commitment to education since the beginning, clearly indicating its purpose: to demonstrate how faith is relevant to life’s needs. Because of my formation at home and in seminary, first, and my own reflections later, I was deeply convinced that, unless faith could be found and located in present experience, and confirmed by it, and useful for responding to its needs, it would not be able to endure in a world where everything, everything, said and says the opposite. (...)
Demonstrating the relevance of faith for the needs of life and, therefore (this ‘therefore’ is important for me), demonstrating the reasonableness of faith, implies a precise idea of reason. To say that faith exalts reason means that faith corresponds to the fundamental and original needs of the heart of each person.” (L. Giussani, The Risk of Education, McGill-Queen's University Press, 2019, pp. xxxi-xxxii).

“I am not here to make you adopt the ideas I will give you as your own, but to teach you a true method for judging the things I will say. And the things that I will say are an experience, which is the outcome of a long past: two thousand years”


Educational Components
Fr. Giussani’s educational method can be summed up in five components:

Present in Ninety Countries
A community of young people who continued to use the name Gioventù Studentesca (GS) forms around Fr. Giussani. The current name, Communion and Liberation (CL), appears for the first time in 1969, as a way of summarizing the conviction that the Christian even, lived out in communion, is the foundation of the true liberation of man.
In the 1970s, the Movement began to spread to many schools, universities and among adults, mostly in Italy, but also in a number of places abroad, beginning with the historic “mission” of the first GS students who left to live in Brazil during the previous decade.
Over the course of the 1980s and 1990s, in part in response to John Paul II’s invitation to the Movement to, “go into all the world and bring the truth, the beauty, and the peace which are found in Christ the Redeemer," many new communities developed from Kazakhstan to the United States, from Uganda to Ireland, and more.
Currently, CL is present in about 90 countries on almost every continent. Fr. Giussani died in 2005. From then, until 2021, he was succeeded by Fr. Julián Carrón, whom Giussani selected as his successor. Following Carrón's resignation, Davide Prosperi has been President of the Fraternity of CL since November 27, 2021.

School of Community
The primary instrument for the “education” of those who adhere to the Movement is School of Community, which consists of reading and personal meditation upon a text, followed by a communal meeting with a large or small group either in a public place or in a member’s home.
The method used is a constant comparison between the Christian proposal and one’s own life, in order to continually verify – in the light of one’s experience – its capacity to respond to human needs in every aspect of reality.
From 2009 to 2021, communities in Italy and abroad are able to watch the monthly School of Community held by Fr. Carrón through an audio/video connection. This possibility – in addition to the notes made available around the world – offers them a precious opportunity to learn the method for this path of deepening education.

A Simple Structure
The Movement is a proposal of a way of life, for life. In addition to School of Community, there are many gestures and instruments to further the education of the person and the community, including: attention to papal teaching, prayer and reading the Bible, spiritual exercises, music, pilgrimages and the Way of the Cross during Lent, charitable work, engagement with the world of fine arts, posters for Christmas and Easter, the common fund and community vacations.
All of these are the object of the free participation of each person (“I bet everything on freedom,” Giussani often insisted); he did not intend any kind of formal membership.
This is also reflected in the Movement’s organization, which is simple and uncomplicated. Groups of School of Community are freely created, at a regional or local level, and at a national level there are "Diaconias" (a term which comes from the first centuries of Christianity), formed of a small number of people committed to the service of local communities, gratuitously. Periodically, “Assemblies of Regional Leaders” take place on different continents and an annual international gathering.

Together with the international website in five languages and the many national sub-sites, Traces, the official magazine of the Movement which is printed and/or published online in various languages and formats, is the primary tool to communicate the life of the Movement and its presence throughout the world.

In Service of One’s Personal Vocation
Living the Christian experience brings the awareness to each of us in the world to answer a “calling,” each of us has a task, or vocation, that becomes clear in the circumstances of our existence and the events that take place. Consequently, the charism of Fr. Giussani gave birth over time to various forms of associations, with the purpose of helping sustain Christian adults in the particular conditions of their personal vocations: as laypeople, religious men or women, or diocesan or missionary priests.
Of all of the forms, the most all-encompassing is the Fraternity of Communion and Liberation, recognized by the Church in 1982 as a place where those enrolled commit themselves to life out the faith as a path to holiness, following the method passed down by Fr. Giussani. You could say that the Fraternity, which requires formal enrollment and adherence to the statutes, is the way in which an adult affirms his or her responsibility for and commitment to the life of the Movement.
Currently, there are about 60,000 enrolled members throughout the world.

Contributions to Our Shared City
Many people have heard of the annual Rimini Meeting or, in Italy, the Banco Alimentare. Both are initiatives created by members of the Movement, and they are just two examples of a surprising creativity in engaging with society that has always been present in CL’s history. It’s important to keep in mind that all of the so-called “works of CL” are, in reality, the work of members of CL; they are the fruit of the free and independent initiative of a single person or a group. What does this mean? The single aim of Communion and Liberation is to give testimony to the fact that the Christian event is the truest response to our human needs and, because of this, a person educated in the faith finds him or herself pushed to take on responsibility, to be of service to society. This is the origin of the many initiatives in every imaginable realm, some of which have grown to a significant scale, as can be seen in the more than 100,000 volunteers who participate in the annual food drive (called the “Colletta,” organized each year at grocery stores across Italy by the Banco Alimentare) or the international renown of the Rimini Meeting. It’s all the fruit of the passion of adults in the Christian Faith, contributing their efforts in every realm of social life, enthusiastically offering their own contributions to our “shared city:” through cultural activities, education and training, assistance those in need, support for young people and families, business initiatives, or service in administrative or political positions. 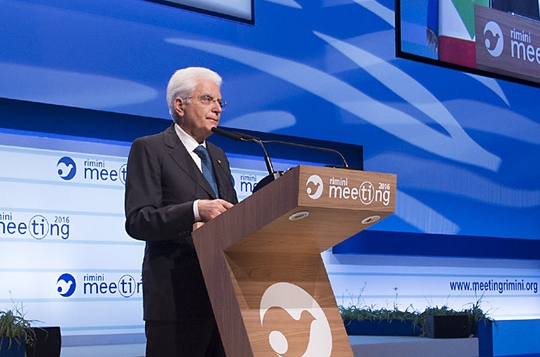 Photo GalleryFr. Giussani, during his years at Berchet
Photo GalleryThe Movement around the world
Historical Timeline
The Fraternity
The Popes and CL
Dimensions of the Christian Experience
Life in the Movement
Lay and Religious Associations
Journey to the Edge of the World
The Beautiful Road
Snapshots