In 2009, Alejandro Marius founded the association "Trabajo y persona". It’s aim, today, remains the same: "To promote work to promote the dignity of every human being”. Alejandro works to enable the most vulnerable sections of the Venezuelan population to be trained professionally in a wide range of fields (mechanics, carpentry, chocolate production, technology...), creating job opportunities and supporting those involved in the training.

For Alejandro, work is not only "a contribution to the common good, but a fundamental tool in the discovery of oneself", without which, at its root, life is in crisis. His "work" began ten years ago, before the political and economic crisis that caused Venezuela to fall into a state of profound instability. Here, poverty is a matter of everyday life: a lack of electricity in homes and hospitals, a lack of running water, medicines, food, these are the most obvious features of an uncertainty whose end is not in sight. This is why the country is currently experiencing one of the most important migratory phenomena in Latin American history: this year, there will have been 5 million emigrants, 15% of the population. 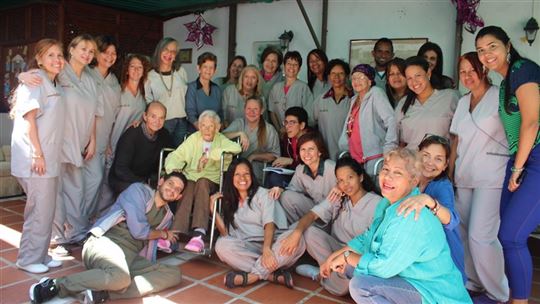 In all these years, Alejandro and his friends have never given up. On the contrary, their adventure continues, even in the crisis, because "in a difficult situation, the purpose of life become even clearer", says Alejandro: "This was the case for St. Maximilian Kolbe, in the concentration camp". There are many initiatives, and Avsi, this year, among the projects of its Tents Campaign, has included "Venezuela. I am not alone". This sustains the experience born from ‘Trabajo y persona, Cuidadores360.

"There are many migrants and they form part of the economically active population. Who remains in the country? Children, entrusted to the care of other relatives, and the elderly", explains Alejandro: "There are many international programs to help the young. But we realized that no one was looking at the very large number of elderly people who are left alone once their families have left the country. And for many, its difficult to bear the cost, from abroad, of a specialist nurse to care for those who have stayed".

Venezuela is the Latin American country with the highest percentage of elderly people. "We asked ourselves what we could do", says Alejandro: "We deal with job training, unemployment here is high. We now find ourselves in front of these elderly people who are alone, and in Venezuela there is no vocational training program to assist them". Thus, Cuidadores360 was born. This is the country’s first professional training course for carers. The project - born in collaboration with the Central University of Venezuela - has already completed its first year of activity in Caracas. "The objective of the programme is to prepare carers for the complete care of the elderly, at 360 degrees. During their months of preparation, the participants - all unemployed people who feel an inclination to serve others - learnt to deal with the needs of elderly people: physiotherapy, medication management, how to deal with emergencies. But that's not all: the courses teach to learn to listen to the elderly and even to play with them". After the first year, all participants already found a job. This initiative was also well received by the institutions, "because it is relevant to the situation in Venezuela. So much so that the institutions themselves, following our example, have taken action to address the same need. For us it's not a competition, but a response that benefits the whole country".

There are, of course, many needs that concern many aspects of Venezuelan society. "But while there is no lack of initiatives and attempts to tackle some of them, such as children, the elderly are forgotten because they are deemed to already be at the end of their lives," Alejandro explains: "Instead, we believe that it is at this precise moment that we need to show our gratitude for their lifetime of work for us, the next generation.” Not letting go of that desire to go out to meet these people is bearing fruit beyond expectations, even for those who participate in training courses, the aspiring cuidadores. Alejandro told us some of their stories in Traces: "For example, there is the story of a girl who lives in a small town far from Caracas and who went out at 4:30 in the morning to be in the classroom at 9:00. She only missed one day of class because a thunderstorm had blocked the streets. Today, she already works, in a place closer to where she lives”. All of this happens in a context where it is difficult to talk about hope. That is not true, however, for Alejandro: "There is a deep crisis, but I am sustained by the certainty that the Lord calls me to live everything with joy, proactivity, and that reality and time are a gift to express what I am. This consciousness is the source of hope in me, I ask for it every day.” It is not just a matter of "bearing" a crisis that appears never-ending: "A gesture of charity can open up the prospect of personal change, which is the starting point for the hope of a family, a community, a country. We want to place our lives at the service of everyone, regardless of how long it will take for the political and economic situation to change”.