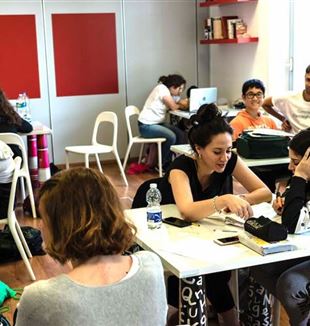 Three hundred families viewed up close. Actually, more than up close, from the inside, sharing in the everyday, “normal” things to do. It is the large, extended house of the Sisters of Charity of the Assumption, present today in the working-class areas of Turin, Milan, Trieste, Rome, Naples and Madrid. "Extended House" is also the name of the project supported by the Avsi Tents Campaign for the second consecutive year. The sisters meet families who are suffering from difficulties on many fronts: they provide nursing care at home, they receive children and help them study, they bear an educational responsibility in their relationship with the school and with the family (sometimes they accompany the children to kindergarten or to primary school) and they collaborate with local authorities and social services. The sisters go to the houses of the neighbourhood and of these families, taking the children to the day centres. The children enter the "house" of the sisters, which extends beyond the walls of the convent. 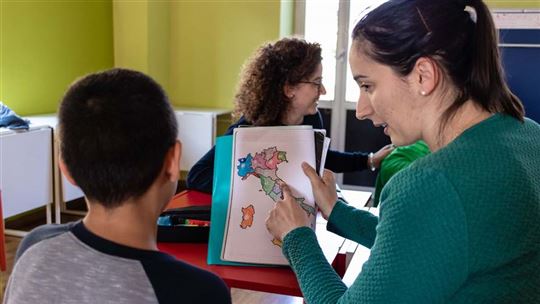 "We go out to meet the need that there is, sharing through simple and concrete gestures of care, daily gestures, a deeper sense of living," explains Fulvia Ferrante, a “Martinengo” nun from Milan, talking about her work: "The mending of relationships is the work of the Mystery, even if sometimes this does not happen. We must also be careful to avoid a misunderstanding of the word "esteem". Esteem is to give value, not to esteem because the other is perfect. We are not called to correct, to modify at all costs, but we are called to be there. With an open heart”.

Sister Gelsomina Angrisano, who has been Mother General for twenty-four years, before handing over the baton to Sister Mariangela Marognoli, gets to the bottom of their experience of welcoming, indicating the prospective gaze to follow: "To obey is the most beautiful thing in the world because we cannot make our own image of happiness, which is always a deep "less". And within all this, it is not a question of doing things ourselves, but of allying ourselves with imperfection: our imperfection allies itself with theirs, within the history of this presence. Everything comes from this".

This alliance of imperfections transforms the quiet despair of many into a solid web of friendships and induces those who have become “non-people”, because they are alone or have lost their roots, to transform back to being “people”. They can live the normal things of everyday life, in an extended house, which is made hospitable and is generated by a great breath that changes everything. It’s a precious occasion also for those who lend a hand to be with the children. Pietro, a volunteer at the day-care center for children in Milan, writes: "After studying, after playing, after our holiday together, going on trips, singing, I go back home and think "I have lived an extraordinary fullness! And I wish it could always be like this, for me and for everyone”.

Singing is not optional, it's an opportunity to be embraced by Beauty with a capital "b". "Among the initiatives that we promote, with friends from the Fraternity, to rebuild the people of God, is the "Serenade to Our Lady". This is an evening in which we listen to readings and songs and to which we invite the families with whom we are in contact," says Sister Cristina Bertola: "Rosa, for example, is a 29 year-old Bolivian mother whom we have known for five years, since she was pregnant with her second girl and Carlos, her second boy who is now 12 years old, was in the second grade. She has participated a few times in the initiatives for families, but this year she was very eager to get more involved: she arrived early with her children and sat in the front row. She participated in the Serenade of songs very carefully, not missing a single lyric. Listening to the song Give me Jesus, she said to one of her son’s teachers: "I want this Jesus".

Sister Cristina explains that, the next day, Rosa told her about the previous night. On her way home by bus, she had burst into tears: "It's something that touched me deep inside, that can’t be described, like a freedom, I felt at peace". And she adds: "It was like being embraced by my mother, even if the comparison is not great. I didn't want to be anywhere else if not there, I felt that my conscience was moved and so I cried as if to ask my children for forgiveness, whom I am sometimes hard on".

READ ALSO Avsi tents campaign/1: Lebanon, a home for all

Small, big stories of friendship that establish a path that withstands time. Sister Fulvia says, smiling: "It's as if God were saying to us: "I'm sorry, I have got things to do for ten minutes, can you take care of this child? Then, I will come back and get him". This is our task, your task: these ten minutes.”

Avsi Tents/1:Lebanon, a home for all
Avsi Tents/3: Syria, Open hospitals. The third year of solidarity
Avsi Tents/4: Brazil, the agricultural school to protect the Amazon
Avsi Tents/5: Mozambique, trained to become the new ruling class
Avsi Tents/6: “Venezuela. I am not alone”
Avsi Tents/7: Eli has grown up