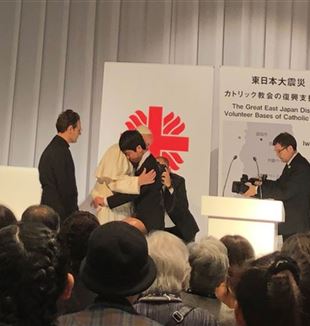 "Only what you love can be saved. Only what you embrace can be transformed.” These words, re-affirmed by the Pope as he arrived in Japan. "We need leaders who are up to the task," he said during the visit. These days, we can see the strength of response and hope that he has in the face of today's problems, humanity, his drama: whether it be life after the atomic bomb, or after the Fukushima disaster eight years ago, or the wounds inflicted by another "war", whose victims are mainly young people.
In this country, there are over 20,000 suicides a year, where the person becomes crushed by the pressure of the system. It is a society that lives, especially its young people, what he calls "scourges": loneliness, the many forms of alienation, such as the phenomenon of hikomori, young people who live in total isolation from the world and spend their days on the Internet.
Then we can understand what it meant for the Filipino boy, who is an immigrant here and victim of discrimination and bullying (ijime), who is so mocked that he “wants to disappear”, when he heard the Pope say: "Leonardo, the world needs you, the Lord needs you, never forget that!”.

Francis gives much space to the dialogue with the young people at Tokyo’s cathedral. He listened to the testimonies of Leonardo, Miki and Masako, he involved the nine hundred young people present, spurred them on, enthused them, made them laugh, asked them to ask themselves: "For whom do I live?” On the first day, when there were young people waiting for him at the airport, and one of them asked him to tell them something, he looked at him and said: "Walk, walk all the time, and maybe you'll fall, but in this way you'll learn to get up and advance in life". Then he commented that the unconscious had betrayed him, because the words that he spoke were "a message against perfectionism and discouragement", in a country where there are "so many depressions".

The Pope asked - first of all to the Church and its pastors, in a closed dialogue with the Bishops, but also to the young people themselves - to pay attention to all human beings and their needs, to give space to gratuitous love, to combat the "most terrible form of poverty", which is spiritual poverty: "A person, a community or even a whole society can be highly developed on the outside, but have an interior life that is impoverished and underdeveloped, lacking real life and vitality". With the heart that has "stopped beating", like "zombies".

The title of the apostolic journey is "Protect all life": "To have a contemplative gaze, to place ourselves before every life as if it were a free gift", he explains thinking of young people, the poor, migrants, the elderly, prisoners (in Japan there is the death penalty).
Francis firmly insists on the necessity of relationships, on how urgent it is to be aware that we belong to one another, in our personal lives as well as in the response to global problems: “No one “rebuilds” by himself or herself; nobody can start over alone”, he says in his touching encounter with the victims of Fukushima. 18,000 people died in the triple disaster of 2011: earthquake, tsunami and the explosion of the nuclear power plant. "Let us spend a moment in silence, so that our first word will be one of prayer”: this is how his speech began, asking for a moment of recollection in total silence, after greeting some of the victims and listening to the song written after the tragedy ("The flowers will bloom"). In the testimonies of the survivors of the disaster, Toshiko, Tokuun and Matsuki, there is gratitude for the great help received in the emergency but also pain that is lived, made of losses, illnesses, divided families, social ties that need to be rebuilt, the serious environmental problem. They all recounted their stories with great dignity, even Matsuki, the youngest witness, who is only 16 years old. He talked about his life as a displaced person, his desire to die, the illness of his father. In the end, amidst bows and joined hands, he is moved and lets himself fall into the Pope’s arms.

Many people in the audience dry their tears, quickly, silently. Toshiko was the director of the Catholic kindergarten, in the city of Miyako, which was hit by the disaster. That day, she lost a lot, but she says: "I have received more than I have lost". Tokuun, a Buddhist priest, speaks for the many who ask for changes and a deep understanding of the decisions to be taken. The Pope recalls that the Japanese bishops have asked for the closure of nuclear power plants: "It is important at times like this, to pause and reflect upon who we are and, perhaps more critically, who we want to be…We must choose a humble and sober way of life that recognizes the urgent realities we are called to face…May that compassion be the path that enables all to find hope, stability and security for the future.” His appeal is that problems should not be dealt with in isolation: wars, the economy, the environment, social justice. "It is a serious mistake to think that nowadays these issues can be dealt with in isolation”. He emphasised this again in a private meeting with emperor Naruhito, where he spoke of his concern that the next global war will unleash upon water. 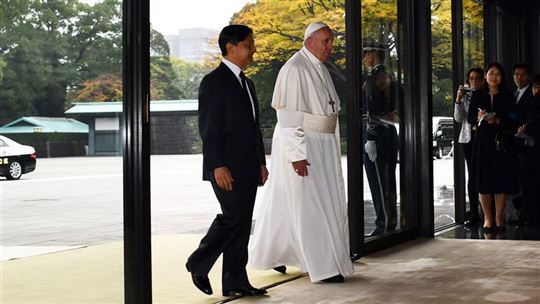 At the Tokyo Dome Stadium, 50,000 people are waiting for him for mass, stopping him constantly within the crowd, and pass by him to be blessed. Iwao Hakamada, the former boxer who spent 48 years on death’s door before being released, because he was innocent, is also present. "[The] freedom of knowing that we are God’s beloved children", the Pope says in his homily: “[This] can be repressed and weakened if we are enclosed in a vicious circle of anxiety and competition. Or if we focus all our attention and energy on the frenetic pursuit of productivity and consumerism as the sole criterion fro measuring and validating our choices, or defining who we are or what we are worth…How greatly does the eagerness to believe that everything can be produced, acquired or controlled oppress and shackle the soul”. And he never tires of looking at the country’s concrete situation: "Here in Japan…[there are] many people who are socially isolated. They remain on the margins, unable to grasp the meaning of life and their own existence”.

Japanese life "runs in very rigid tracks", says Father Andrea Lembo, who has been a PIME missionary in Tokyo for ten years: here where we are driven to "realize society more than ourselves", we need "the closeness of a human relationship, in which people can discover that there is always space of freedom, even in this system. It is the space of their heart". His love for this people, especially for the young, makes him aware that he is called to a "scramble" evangelization, which he constantly stirs up, like the immense road junctions of this city. To cross life, to reach men wherever they are and however they are. 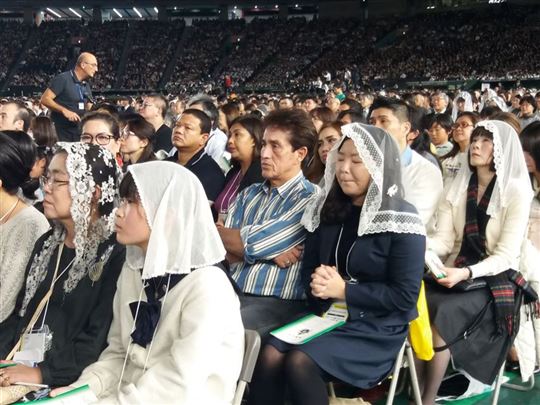 Here, Catholics formed less than 0.5% of the population, "a minority, but their presence is felt," according to Francis, who came to "confirm Japancese Catholics in their faith, their charitable outreach," he said before the Prime Minister, Shinzo Abe. Because "the strongest and clearest word" that the Church can offer this society is "the humble, daily witness" and a martyr Church "can speak with more freedom".

The DNA of faith in Japan is the extraordinary experience of the laity who, for seven generations, were baptized and lived "as domestic Churches, becoming a mirror, perhaps without knowing it, of the family of Nazareth". Their existence was only discovered in 1865, when the first missionaries returned to the country after more than two centuries, when Christianity was banned. As soon as they realized that priests had returned in communion with Rome, they arrived from Urakami and approached Father Petitjean, a French priest, with a phrase that can be repeated today as well: "Our hearts are equal to yours".
#PopeThailandJapan