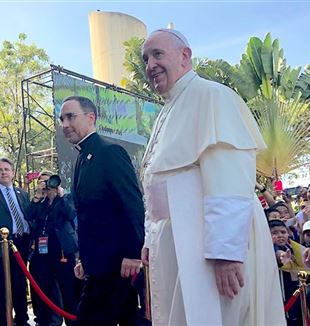 Benedetta Jongrak Donoran, simply called Tee, comes from a Buddhist family. "I lived according to this teaching: doing good frees us and assures we go to Paradise”. Therefore, as a child, she wondered why there had to be "Jesus, who assumes the consequences of sins for us". One day, when she was fifteen, she was invited to church by some nuns: "As soon as I entered, I saw the statue of a woman. I didn't know who she was, but I was struck by her beauty and the way she looked at me.". Since then, she began to participate, on her own initiative, in mass on Sunday, "because I was attracted by the beauty of that woman. I wanted to know more. It was in this way that I began to get to know Our Lady and Jesus. I didn't believe, however, that Jesus was God, and I wondered how a man could eliminate the sins of other men...".

Tee tells her story to Pope Francis, in the parish of St. Peter, in the district of St. Phran. The emeralds and gold of the royal palaces and temples of Bangkok, with their mixture of European Gothic, Byzantine art and Thai style, are only thirty kilometers away. But, here, in the suburbs, everything is different: it is the Catholic village of Wat Roman. Its church was founded in 1840 (it was initially made of bamboo) and, today, it is the largest parish in the country. This is where the Pope begins his last day in Thailand, meeting the local Church. 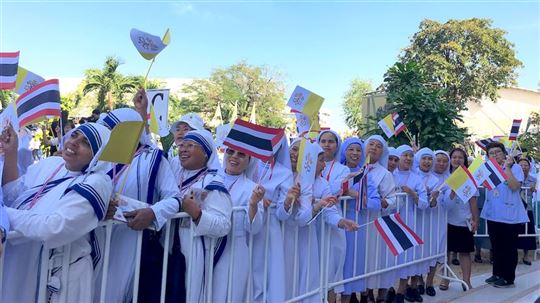 Francis goes up towards the altar and prays for a few minutes, in silence, in front of the Tabernacle, encouraging people to kneel down. Then, with his head bent, he listens to the prayer that everyone sings together in Thai: On the road of Your love. Before speaking to the priests, religious people, seminarians and catechists, he listens to Tee’s testimony. Today, Tee is 44-years-old and is a Xaverian postulant, whom she met when, not yet a Christian, she went to work in the House of Angels charity. Her encounter with the Gospel was not without labor: for her, the word of God was "a sharp blade working in my heart. I didn't want to give in, but continuing to listen to it was like playing with fire. My restlessness and discomfort grew.” When she asked to receive Baptism, the priest said no: "The truth is that I wasn't ready to receive it, I just wanted to cure the malaise I felt, but I didn't ask for God's mercy. Grace came as conversion of heart. I let myself be overcome by His love, by His patience, which waited for his daughter to return to Him. I would not have believed without having the experienced God's love.”

The Pope, after listening to her, dwells on the beginning of her story, which revolved around having seen Our Lady's gaze: "Who is that woman? It had nothing to do with words, or abstract ideas or cold syllogism. It all started with a look, a beautiful look that captivated you. What great wisdom was hidden in your words. Let us be alert to beauty, alert to a sense of wonder capable of opening up new horizons and raising new questions." Then he says to everyone: "The Lord did not call us and send us forth into the world to impose obligations on people, or to lay heavier burdens than those they already have, which are many, but rather to share joy, a beautiful, new, surprising horizon”.

The morning spent in this Catholic "heart", on the outskirts of Bangkok, the encounter with the people, makes Francis grow in gratitude "for the lives of all those missionaries, men and women, whose lives of service left their mark”, for all consecrated persons who "by the silent martyrdom of fidelity and daily commitment have borne great fruit. I do not know if they were able to appreciate or taste the fruits of their commitment, but without a doubt their lives were capable of bringing about much good.” And he says to those present: “May we too feel called to be men and women who help bring about the new life the Lord bestows on us. As those called to apostolic fruitfulness, called to struggle valiantly for the things that the Lord loves and for which he gave his life, let us ask for the grace for our hearts beat in unison with his own. I would even ask you to be wounded by that same love; to have that same passion for Jesus and for his kingdom”. 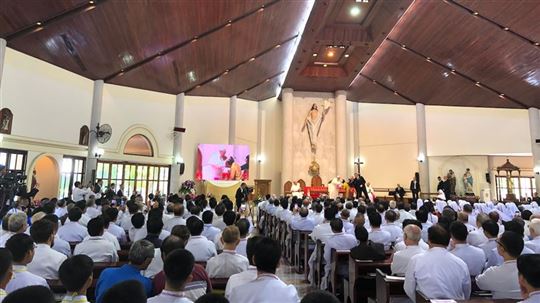 He puts back, at the center, the words that are “prophetic for our times” of Benedict XVI: "The church does not grow by proselytizing but by attraction.” He then emphazizes, radically, the central theme of these days: the inculturation of the Gospel. He asks that he are not afraid to seek “new ways” to “profess the faith “in dialect”, like a mother who sings lullabies to her child. With that same intimacy, let us give faith a Thai face and flesh, which involves much more than making translations”. He says that he has notice, painfully, that “for many people Christianity is a foreign faith”.

At the end, he returns to the gaze of Mary who marked the life of Tee, who makes us look at "that other gaze", that of Jesus: "His is a gaze that captivates because it is able to penetrate appearances to find and celebrate the authentic beauty present in every person. It is a gaze that, as the Gospel teaches us, shatters all determinisms, fatalisms and standards. Where many saw only a sinner, a blasphemer, a tax collector, an evildoer or even a traitor, Jesus was able to see apostles. Such is the beauty that his gaze invites us to proclaim, a gaze that enters in, transforms and brings out the best in others.” For him, there is no holiness without this living recognition of the dignity of every person. “I ask you, please, not to yield to the temptation of thinking that you are few in number”, he says, greeting those who are in church or in front of the maxi-screens, who have come from all over the country: "Instead, think of yourselves as little, little tools in the Lord’s creative hands. And he will be writing with your lives the finest pages of the history of salvation in these lands.”

As He wrote with the martyrs. The Pope, speaking to the Bishops of Thailand and of the Federation of Asian Bishops' Conferences, at the Shrine dedicated to Blessed Nicolás Bunkerd Kitbamrung, the first Thai martyr priest, who died of tuberculosis in 1944 while in prison, asks them to look at the martyrs. For Francis, looking at how these men lived allows us to measure the present, to open up our perspective, to "avoid taking refuge in fruitless discussions and ways of thinking”. Conscious of the centrality of the Holy Spirit (who “arrives in advance of missionaries and remains with them”), they did not "expect a foreign culture to receive the Gospel easily; rather, they plunged into these new realities, convinced of the beauty of which they were bearers. All life has value in the eyes of the Master". 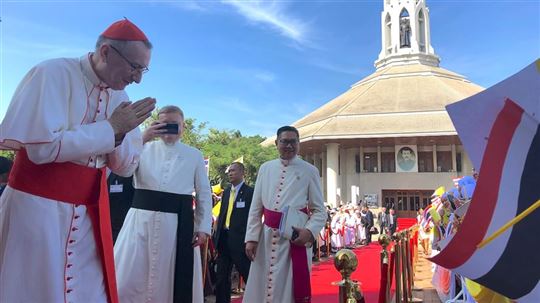 Together with evangelization ("many of your lands were evangelized by the lay faithful") and "non-ideological" inculturation, the other great need is that of "mutual understanding" and dialogue: "All the more pressing for humanity today”, he says in the meeting with religious leaders at Chulalongkorn University. Next to him there are Muslims, Hindus, Sikhs, Buddhists and Christians; the choir that welcomes him is formed by Muslim and Christian children. He makes a strong appeal to what the world demands today: "All these situations require us to be bold in devising new ways of shaping the history of our time without denigrating or insulting anyone.” He attacks the “insular mode of thought”, the “unitary model”, and asks for a change in method and criteria, to “offer a new paradigm for resolving conflicts”.

Nor does he spare the denunciation of the risk of "to ‘homogenize’" young people, transforming them into “malleable goods". He met young people immediately afterwards, for mass in the red-brick, neo-Romanesque Cathedral of the Assumption, commissioned by a French missionary, Fr. Pascal who, at the beginning of the nineteenth century, raised funds to build it. There are about ten thousand people, inside and outside. “Do you want to keep alive the fire that keeps you burning brightly amid darkness and difficulties? Do you want to be prepared to answer the Lord’s call? Do you want to be ready to do his will? You are heirs to a precious history of evangelization that has been handed down to you as a sacred treasure.” He points out to them that “your parents, grandparents and teachers…had to endure many trials and much suffering in their lives. Yet along the way, they discovered that the secret to a happy heart is the security we find when we are anchored, rooted in Jesus: in the life of Jesus, in his words, in his death and resurrection”.

At the end of Mass, he is very tired, but he stops to kiss and embrace the sick children in the front rows. And then again, outside the Cathedral, he lets himself be touched and stopped by the crowd, he limps but smiles at everyone. The words which he took up, earlier in the day, from Evangelii Gaudium, come to mind: "The pastor is a person who, first of all, viscerally loves his people".
#PopeThailandJapan

The Pope in Bangkok: that necessary face of the Church
The Pope in Hiroschima and Nagasaki: "Where the wound becomes a cry for salvation"
The Pope in Tokyo: "The freedom of knowing that we are God's beloved children"