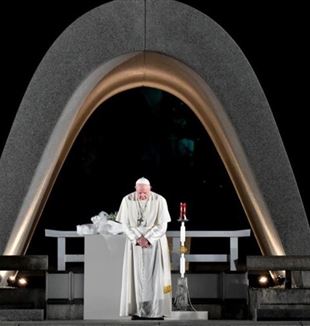 In 1945, Yoshiko Kajimoto was fourteen years old, he was the eighth grade. On the morning of 6 August, when she emerged from the rubble, it was dark, as if evening had come. "People walked side by side like ghosts. The bodies were so burnt that I could not distinguish between men and women, their hair straight, their faces swollen, their lips hanging, with both hands outstretched and their skin dangling. In the next few days, the bodies began to rot and white smoke enveloped everything: Hiroshima had become a crematorium.” His father and mother died from the effects of radiation, like so many of her friends. She has leukaemia.

At Hiroshima, in a single instant, eighty thousand people died, and sixty thousand more died in the following months. "Here, in an incandescent burst of lightning and fire, so many men and women, so many dreams and hopes, disappeared, leaving behind only shadows and silence”. The Pope plunges himself into that instant, that abyss, and pronounces his message of peace at the Hiroshima Memorial, at the end of the most intense day of his trip to Japan, the country which, from a young age, he dreamt of being sent to on mission. His health did not allow him to follow this desire, it’s “realization has been long in coming”, he told the Japanese Bishops, upon his arrival. 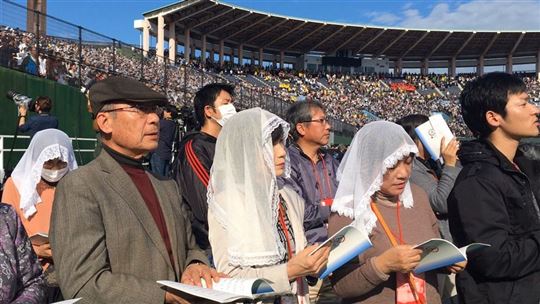 Francis greets some victims, in the absolute silence that seems to arise within this place, in front of the Gennaku Dome, the dome of the bomb, a building on the bank of the river Motoyasu, never restored to leave the evidence of the explosion. The Pope came to pray, to remember, to bow "before the strength and dignity of those who, having survived those first moments, for years afterward bore in the flesh immense suffering, and in their spirit seeds of death that drained their vital energy”. But he also asked that our present, choices and actions be judged by the "terrifying hour" that changed the face of humanity, as testified by another survivor, Kojí Hosokawa, who was seventeen at the time: "We must understand that the bombs were not only dropped on Hiroshima and Nagasaki, but on all humanity. The war made people crazy and the final act of madness was the atomic bomb, which denied human existence.”

On this day, Francis' words are strong. He condemns the hypocrisy with which people speak of peace whilst financing arms and conflict, the false security of the use of arms, the distrust that poisons relations between peoples, the prevalence of the dynamics of distrust, the erosion of multilateralism. "The use of atomic energy for purposes of war is immoral, just as possessing of nuclear weapons is immoral…We will be judged for this. Future generations will rise to condemn our failure if we spoke of peace but did not act to bring it about among the peoples of the earth. How can we speak of peace even as we build terrifying new weapons of war? How can we speak of peace even as we justify actions by speeches filled with discrimination and hate?...A true peace can only be an unarmed peace.” He specifies that it is immoral not only to use nuclear weapons, but so is “possessing nuclear weapons”.

In the morning, he had been to Nagasaki, where two thirds of the country's Catholics live. At the Atomic Bomb Hypocenter Park, Japanese people, of all ages, waited for him. They sat in silence, all soaked, in plastic capes, under the pouring rain and black sky. Upon his arrival, they stood up and silently welcomed him, while the choir, made up of survivors, sang a song. Francis placed a wreath of flowers on the symbolic site of the epicenter of the 9 August bomb. He said that the money spent and earned from weapons is "an affront crying out to heaven". For him, a peaceful world is not impossible. "To make this ideal a reality calls for involvement on the part of all: individuals, religious communities and civil society, countries that possess nuclear weapons and those that do not, the military and private sectors, and international organizations. Our response to the threat of nuclear weapons must be joint and concerted, inspired by the arduous yet constant effort to build mutual trust and thus surmount the current climate of distrust…this is a duty to which the Church feels bound before God and every man and woman in our world”. Among the people there, Francis also greet the son of American photographer Joe O'Donnell, who took the photograph that, for a year now, Francis has wanted to disseminate as far as possible: a child from Nagasaki, upright, carrying his little brother tied behind his back, dead, waiting for cremation. A photo that "touched my heart, made me pray a lot," said the Pope. On the back, he wrote only these words: "The fruit of war". 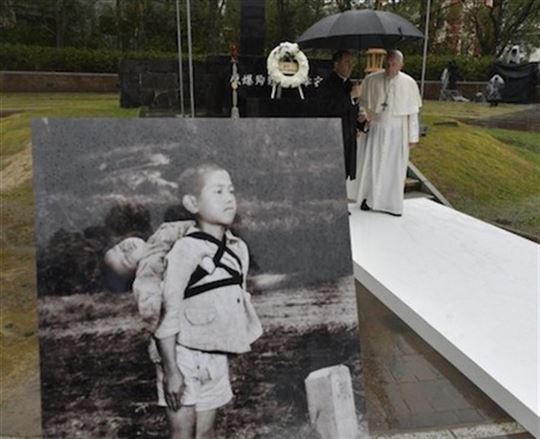 In the afternoon, at the Baseball Stadium in Nagasaki, silence gave way to the festive emotion of thirty-five thousand people (including Chinese and Koreans), and even the sky opens: the mass for Christ the King is in Latin, women and girls have their heads covered with veils of lace, then there are elderly people, newborns, people from all over the country. On the altar, the wounded head of the wooden Virgin, found in the cathedral of Urakami, the most Catholic neighborhood and epicenter of the explosion. The homily is on the Gospel of the good thief, the evildoer who, with a tortuous past, recognizes the Lord, "at the least triumphal and glorious moment possible”, in the moment of injustice, impotence, humiliation and incomprehension. But the Lord is "always and everywhere to offer salvation", says the Pope: "This land has experienced, as few countries have, the destructive power of which we humans are capable. Like the good thief, we want to speak up and profess our faith, to defend and assist the Lord, the innocent man of sorrows. We want to accompany him in his ordeal, to stand by him in his isolation and abandonment, and to hear once more that salvation is the word the Father desires to speak to all: “Today you will be with me in Paradise”.” 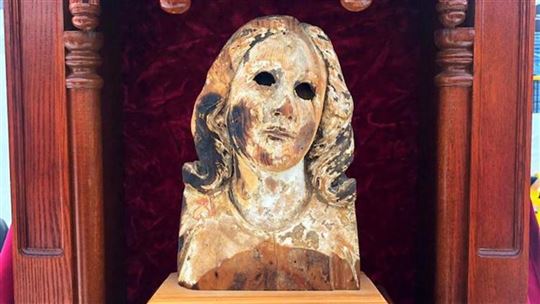 There are existences that announce this possibility, that the last word "despite all evidence to the contrary" does not belong to death but to life: the Pope reminds everyone of the experience of the 26 saints of Nagasaki, martyred on 5 February, 1597, going towards the sanctuary dedicated to them. Their death - they were crucified on a hill after being forced to walk 800 kilometers in winter, from Osaka to here - marked the beginning of the long, anti-Christian persecution. "Yes, here we see the darkness of death", says the Pope: "But also the light of the resurrection…May we never forget their heroic sacrifice!” He implores that it may not remain "honoured" in a museum, but be a living fire of the soul. Accompanied by the Jesuit provincial, Father Renzo De Luca, who was his pupil in Argentina, he visits the museum, blesses the objects of the martyrs and of the kakure kirishitans, the "hidden Christians", who lived and maintained the Christian faith for two and a half centuries, only by virtue of Baptism, without priests. The monument is made up of life-size statues of the 26 martyrs set out to form a cross. The Pope prays in front of the relics of Paul Miki (the first Japanese Catholic religious) and some of his companions, for the Christians who, today, in many parts of the world "suffer martyrdom for the faith. They are martyrs of the twenty-first century and their witness summons us to set out with courage on the path of the Beatitudes". Citing the Abu Dhabi Document on Human Fraternity, he asks us to raise our voices so that religious freedom may be guaranteed to everyone, everywhere, and against any manipulation of religion. 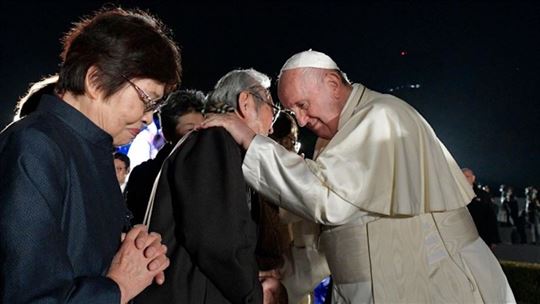 "Please, continue to lead us", Francis asked Archbishop of Nagasaki, Joseph Mitsuaki Takami, at the end of Mass, "so that people can deeply respect their dignity and find true happiness". The Archbishop, who comes from a family of "hidden Christians", tells the Pope: "The Japanese people strongly desire that Nagasaki is the last site of the atomic bomb. You have given us great help so that this desire becomes reality".

“Evil has no preferences; it does not care about people’s background or identity. It simply bursts with its destructive force”, the Pope said, as soon as he landed in Japan. Within the wound of that moment in history there are all other kinds of wounds, personal and social, that become a cry, that can only be a cry, to be saved. This is how Francis ends the day in Hiroshima: "Come, Lord, for it is late". Marcia was in the crowd at the Memorial: "Peace, justice, truth have come to me through the Pope”.
#PopeThailandJapan