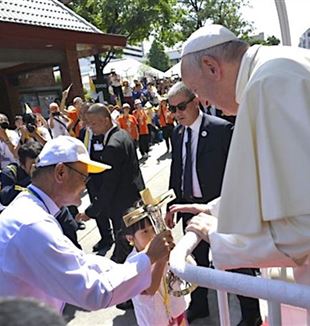 Without the encounter with the Thai people "Christianity would have lacked your face". The beginning of Francis’ visit to Thailand, a trip that will also reach Japan, was marked by this need for the other. The other, who still remains unknown and who is different, but who is part of us, we need to “open our hearts to a new way of thinking”. The Pope spoke of the first missionaries who arrived in these countries as men who "set out in search of family members they did not yet know. They set out to seek their faces.” They did so to offer the Gospel, but also "to receive what they needed to grow in their own faith”.

Francis’s words are echoed in the daily life of Fr. Adriano Pelosin, who has been immersed in Thai life for forty years. The PIME missionary is an "institution" here: he has dedicated himself, body and soul, to the tribal populations, the disabled, orphans, the sick, the elderly, and, today, specifically, to those from the slums of the capital city. "After such a long time, these people surprise me. I have learnt a lot from them: the sacred value they give to personal relationships, to their relationship with nature". Specifically, to him, who is from Veneto and grew up in "a narrow mentality and a somewhat formalistic religiosity", they made clear that "what is man, human nature: the need to be understood, taken hand in hand, to be able to start over again". We need the other, however "distant", to "glimpse", continued the Pope in today's homily, "the Father’s loving plan, which is not limited to a select few or a specific culture, but is greater than all our human calculations and predictions". 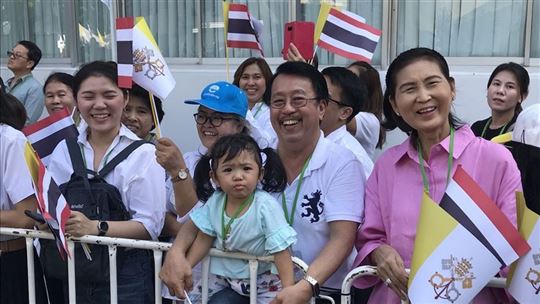 At the mass in the stadium, a moment to meet the people, the 60 thousand people who were there from every religious tradition. And among the "small flock" of Catholics (380,000, not exceeding 0.5% of the population) were those who came from Cambodia, Vietnam and many remote areas of the country. "They never leave their villages, but, for the Pope, they finally wished to”. Fr. Domenico Roghiero, an oblate of Mary Immaculate, has been on mission here for twenty years. He lives in Mankhaw, in the North-Eastern mountains, and has helped his people to cover the cost of the trip: they left at dawn, or some even left the day before, and travelled eight hours by bus to go to mass, to then to leave again. Evangelization is most alive, today, amongst these animist tribes from the mountains: they allow themselves to be met by Christianity with the great simplicity that characterizes their lives. It is simple, for them, to understand what the Pope said to the young people who, on the evening of his arrival, watched in prayer or were on their way. In a video message from the Nunciature he said: "There are two things that we have to do in life. We have to keep our hearts open to God, since we receive out strength from him, and we have to keep journeying, because, in life, one can never stand still. A young person cannot retire at the age of twenty! He or she must keep walking. He or she must always keep moving forwards, always going uphill”.
"We hope that the Pope’s visit will give another dimension to each one’s life, not a trivial dimension but spiritual”. These are the words of Sister Ana Rosa Sivori, on Radio Vaticana. A cousin of Pope Francis, she is a 77-year-old Salesian who has been on mission here for 54 years: " The Buddhists admire him because of his closeness to the people, his simplicity, his coherence... Because what he says, what he teaches he lives daily…They say he seems to be one of them”.

The journey began with the embrace between the Pope and Sister Ana Rosa: on arrival, on the runway of Bangkok airport, she was the first to meet and welcome him. "I am happy to see you and that you are my translator", he told her. As he travels on the Pope-mobile, she walks alongside him, smiling and attentive, she lets the children come beyond the barriers, she makes him stop. And her cousin bends towards them, blessing them.
Here, the Church is celebrating 350 years of existence and the hundreds of people who wait, composed, in the street and in the various places, have waited for so long to meet the Pope. They met John Paul II 35 years ago. 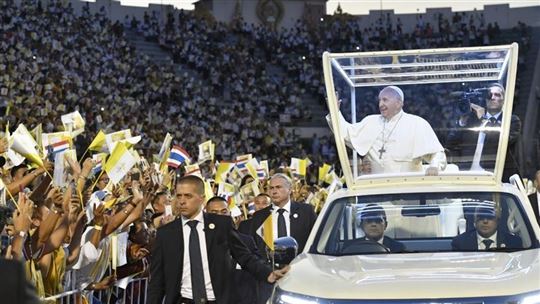 It’s the first time that the young people meet the Bishop of Rome. Ohe is amongst the volunteers. Her mother is Catholic and she to share her faith. Today, she is 40 years old, but when she was eighteen she won a six-month scholarship to go abroad: "I chose Italy because, I said to myself: there, I will always see the Pope. I hadn’t understood…But, today, he is here. He came to me". She is grateful to be part of a "minority", because "you live in tension. You are called, in everything, you are helped not to take faith for granted, and to involve yourself, such as in volunteering, because there are only a few of us and there is a need”. "This land bears the name “freedom””. But to be a land of freedom, said the Pope in his first speech, addressed to the Prime Minister, General Prayut Chan-o-Cha, and to the authorities in the Government Building, we have to "ensure that individuals and communities can have access to education, dignified labour and health care”, everything that “can enable an integral human development”.

Today, the country is in a transitional phase: a new sovereign, Rama X, was crowned in May, they have a new government, an economy in crisis and growing Islamic fundamentalism in the South. And it is no stranger to what the Pope calls "global problems", that embrace "the whole human family". The country is in need of "artisans of hospitality", men and women committed to the integral development of all peoples”. He focuses on migration which, because of the “condition” in which they take place, are “one of the principal moral issues facing our generation". And then, several times in his speeches, he puts back, at the center, all of those who are "discarded", especially the victims of abuse and exploitation: "I think especially of those children, girls and women exposed to prostitution and trafficking, disfigured in their most authentic dignity; to those young slaves of drugs and nonsense that ends up obscuring their gaze and burning their dreams; I think of the migrants stripped of their homes and their families, as well as many others who, like them, can feel forgotten, orphaned, abandoned”. The Pope assures the help of the "small but lively Catholic community", also in responding to "the cry of our many brothers and sisters who yearn to be freed from the yoke of poverty, violence and injustice".

Here, the Church, though small, is very present through works of charity and education: there are 600,000 students in both Catholic schools and in schools of all religions. Pope Francis’ words repeat and express, several times, for example in his meeting with the Buddists at the temple with Patriarch Somdej Phra Maha Muneewong, the gratitude for religious freedom, which Christianity has enjoyed since its arrival here (four and a half centuries ago). His words insist upon the fact that Catholics are here as witnesses and to bring their service, not to “conquer”. The meeting that happened 50 years ago, between Paul VI and the then supreme Buddhist leader, was renewed today. "These are smalls steps”, says Francis, “which help testify that the culture of encounter is possible (among the gifts brought by the Pope, also the Declaration of Abu), not only within our communities but also in our world, so prone to creating and spreading conflict and exclusion. When we have the opportunity to appreciate and esteem one another in spite of our differences, we offer a word of hope to the world, which can encourage and support those who increasingly suffer the harmful effects of conflict”. 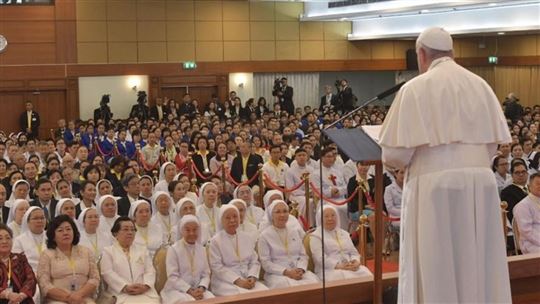 "Disciples of Christ, missionary disciples" is the title chosen for the visit. In his meeting with those who work in the wards of the St. Louis diocesan hospital in Bangkok, the Pope said: “All of you, as members of this hospital community, are missionary disciples whenever you look at your patients and you learn to call them by name.” He emphasized that their work "is not only a matter of procedures and programs; rather, it has to do with our readiness to embrace whatever each new day sets before us. It is about welcoming and embracing human life as it arrives at the Hospital’s emergency room, needing to be treated with the merciful care born of love and respect for the dignity of each human person”. Afterwards he visited the sick and disabled "as a way of accompanying them, however briefly, in their pain”. He added: "Each of us knows how illness brings with it questions that dig deep. Our first reaction may be to rebel and even experience moments of bewilderment and desolation. We cry out in pain, and rightly so: Jesus himself shared in that suffering and made it his own. With prayer, we too want to join in his own cry of pain. By uniting ourselves to Jesus in his passion, we discover the power of his closeness to our frailty and our wounds. We are invited to cling to his and to his sacrifice.”

After a private meeting with King Rama X, the Pope enters a stadium that has been celebrating and waiting for hours, which welcomes him with traditional songs and dances. The homily begins with the question from Matthew 12: "Who is my mother, and who are my brethren?". The Pope stressed how surprising it is that the Gospel is full “of questions that attempt to unsettle and stir the heart”, that shake you, make you walk, "that challenge us to open our hearts and minds to encounter a newness much more beautiful than we could possible imagine. The questions of the Master are always meant to renew our lives and those of our communities with incomparable joy.” Tomorrow we will continue with meetings with priests, bishops, religious leaders and the long-awaited mass with young people. Then, the next stop: Japan.
#PopeThailandJapan

The Pope in Bangkok: "Anchored in Christ, the secret of a happy heart"
The Pope in Hiroschima and Nagasaki: "Where the wound becomes a cry for salvation"
The Pope in Tokyo: "The freedom of knowing that we are God's beloved children"