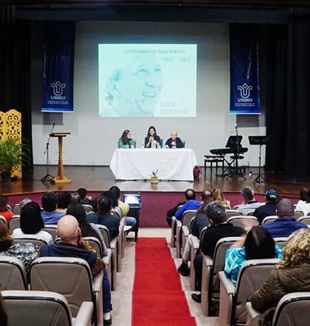 Panels from an exhibition on the life of Luigi Giussani were on display at the entrance of the Vera Janacopulos auditorium of the Federal University of Rio de Janeiro to welcome participants, about 70, at the meeting dedicated to the centenary of Giussani’s birth on September 30 at the Praia Vermelha campus.

Two guests spoke at the event, organized by Professor Márcia Valéria Teixeira Rosa and moderated by journalist Elizabeth Sucupira: Julia Fernandes, a Pedagogy student in Rio, and Rosetta Brambilla, an Italian missionary who has been in Brazil for more than 40 years, and is the founder and general coordinator of the "Fr. Giussani Educational Works" in Belo Horizonte.

The opening of the evening was full of fascination and beauty. To begin with, a short video from the centenary virtual exhibition was shown from which one could perceive all the intensity of Giussani in his gestures and words. Then, to introduce listeners to Giussani's sensitivity to beauty, a presentation on music was organized. Two arias from Donizetti's operas Spirto gentil and Una furtiva lagrima [A furtive tear] were chosen, performed by singers Frederico de Assis and Fernanda Schleder from the city's Municipal Theater Chorus. 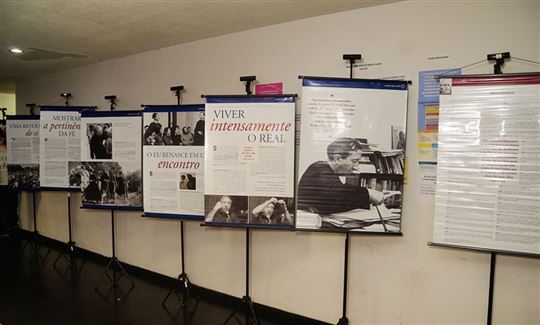 When Rosetta began to speak, she captivated everyone. The complex of social works that she coordinates bears the name of Fr. Giussani because her educational passion was born out of an encounter and friendship with him and the people he generated. She met him when she was young in Italy when she was invited to a party by a friend. There she saw something that attracted her and she decided to follow those new friends. Of humble beginnings, she worked in a factory and, in order to get the money to attend meetings, she worked extra jobs in the evenings. And she went to Milan on weekends, "I could not help but go. I absolutely had to meet that man." Why? "Because I had never felt looked at in that way before. Fr. Giussani had a gaze towards reality that fascinated me, because he did not just look at your poor person, he looked at you as if you were unique. I wanted to meet him so that my gaze could become more and more like his."

It was an encounter that touched Rosetta's life down to the smallest details, down to the way she went about her daily work painting porcelain, fully aware of the value of her work, and so she wanted them to be flawless: "I would think about those who would use that object and I would say to myself, 'They will not know who made it, but I know why I do it, for Whom I do it.'" Over the years the story went on, on Sundays in Milan for charitable work, masses and community meetings, learning from Fr. Giussani that "sign and Mystery coincide," Rosetta continued. "He made you happy to exist, because he knew how to make the world beautiful." In that friendship, in which everything vibrated, "the authentic face of a person was revealed," like when developing the negative of a photo.

Julia, on the other hand, is twenty-three years old and never met Fr. Giussani. She began her talk with a passage from Is it possible to live this way? It was when she received this book as a gift that she discovered the Italian priest’s charism: "The criteria of the heart are like stable principles, principles that make you judge what you find, and you say, 'It is beautiful, it is true....' Emotion is a reaction. Correspondence is a judgment that compares the emotion that is aroused in us with the demands of the heart, which describe the path to destiny... There is a human help for this, which is companionship. But not just any companionship: a company made up of people called to seek as you do." For Julia, then, knowledge comes through friends who are part of the movement: "Thus Giussani is part of my journey as someone who points me to Christ in the simplest things. Everything began to be determined by this friendship, all my decisions at home, in my family, at university. I began to look at all things through the lens of this encounter." As a teenager Julia participated in youth groups in the parish, but meeting CL was new: "The search for life was always the same, but how fascinating it was to find a place that gave me an extreme experience of freedom. And that is why Fr. Gius became a father to me." It is a path that helps her recognize today that "everything is more mine, and everything has been given to me."

Read also - Uganda: "Here I can pour out my hear"

Giussani was a friend that Rosetta was privileged to have been very close to, especially when she left for mission in Brazil in 1967. Those were the years of protest, and the early missionaries ended up getting very involved in the struggle for social justice. At that time Fr. Giussani was sending letters to his close friends, and Rosetta received two of them as well. In 1969 he wrote: “’Trust in the strength of God, who will always know how to heal you of every weakness and overcome every vanity.' When some friends left this companionship it was very painful, as if they had torn my flesh. The bond with Fr. Giussani prevented me from losing myself as well." That same bond still persists today through the company of friends who accompanied Fr. Giussani in following the Church, generating a people.#100Initiatives