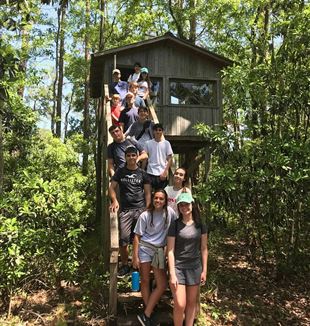 I teach, and in my seventh period there was something special with that group of students, so we started a friendship. After school, they stayed in my classroom and we kept talking about what we had been discussing in class, or other things, or they had questions for me. Eventually, they were there on the day we had School of Community, so the stayed.

This friendship grew to the point where I had one of their moms call me once and say, “Ms. Smith, I’d like to speak to you. I have this problem that I’m facing, and I don’t know how to handle it. My daughter speaks so highly of you and I was hoping you could help me.” So, she picked me up and I went for a ride with her. We talked about everything she was going through and, in my mind, I was thinking, “What is the right thing to tell this woman in the middle of this situation?” There was something in me that said, “Just be with her. Just hear her.” I didn’t give her a solution with this big issue she was facing, but she thanked me, and she said, “Now I know why [my daughter] speaks so highly of you.” Eventually, she and a few other adults started coming to the adult School of Community because they were curious as to what their kids had found.

So, I had this really strong group of kids that were coming to School of Community and it was a very honest and open relationship with them. Sometimes they would say things like, “Yeah, I know that Jesus is my best friend and I can always count on Him,” and I would always go, “Let’s go further.” One girl who came once said something like that and all the other kids looked at me and then looked at her, and they all said, “Blah!” The girl never came back, but she did tell me it was because she was very busy.

Last year, we went to the GS winter vacation and my kids were so excited to meet other kids who were doing the same thing. They had a great time. So, I was excited to begin this year, and the first day of school they came in and asked when we would be meeting; I ended up having about twenty-seven kids in my classroom. I took a picture and sent it to my husband to show him how many kids were there. It started out strong, but in our school, Junior year is when you start with all the Honor Societies and SAT prep and so on. So, the numbers started dwindling because a lot of the kids we had were upperclassmen. They would come on and off and we were struggling with the reading because people would come and discuss one week and then come back after two or three weeks and they would be lost, so I’d have to explain where we were.

In the midst of this, I started developing friendships with some of my Freshmen. I invited a couple of them to School of Community, and the group became more Freshmen than Juniors at that point. Sometimes, the Juniors would come. There was one incident where one of the girls was there in our circle and she pulled out her iPad and a notebook. We were talking about the reading and she was doing homework and not looking up and I was thinking, “She’s not even paying attention. Why is she even here? This is not the way it’s supposed to be. It’s a little bit rude and if she doesn’t want to be here, it’s fine, she doesn’t have to be here.” I mentioned it to my friend Enrico and he said to me, “How beautiful,” and I thought, “I missed it.” I didn’t see the beauty in it and when he explained it, I thought, “Wow, this girl had a lot to do, but there was something so real there, that she had to be there even if all she did was be there.” I started to realize that despite my fears of not knowing what to do with the kids or not knowing how to answer questions necessarily, there was something there that was very real.

This year, GS was doing the winter vacation again. But we didn’t have time at that point to fundraise to pay for it. I was talking to Fr. José about it and he said, “Why don’t you do your own vacation?” Although it was a little intimidating in a way because I didn’t even know where to start, I went back to what I had found starting with that friendship with these students. I asked some of my friends in the community to help me. People came and helped me with the cooking, the music, the games, and by giving a witness. I threw out any idea of how it should be and just went with it. We played games and I assigned the kids to take care of the kitchen, so at every meal, a different student was in charge of helping cook and prepare.

It turned out to be a very beautiful weekend, even when it got really bad because of intense storms. My sister has a ranch in central Florida, so we went there because it would be cheap, but when it started storming, the tents ended up having swimming pools in the middle. I got in a little bit of a panic mode. I had about twenty-two students, and I was trying to figure out what we would do. One student just said, “Smith, you look stressed. Why? Look at us, we are fine.” I thought, “Here we go again. I’m trying to plan the way it should be, but it’s fine.” We had to move tents and some of us slept in the truck, some in the van, and some of the boys slept in the loft of the barn, but it worked out and it was beautiful.

That night, we had a campfire, and there was one student who is on the Autism spectrum. He’s very high functioning, but he tends to blurt things out. I asked them what they thought of the weekend and if it had been what they were expecting, and one of the kids said, “I thought it was going to be really Jesus-y.” I said, “Jesus-y?” And the kid on the spectrum said, “Yeah, I thought we were going to be praying all the time.” And I said, “And you still came?” I was surprised. I think they probably hoped it wasn’t going to be that way, that they were going to have fun with the other kids and just deal with the Jesus part of it. But he said, “At the same time, Smith, He’s been here all along. Look at us, we are all different and we are all here together. He’s like this campfire that brought us here together.” He speaks what he sees, he’s not saying something to impress of give the right answer. Another student said, “Is this it? Is this a one-time deal, or can we continue?” It was obvious that there was a desire for more of what they were living that I was so worried about preparing for them.

At the end of the school year, the same kid wrote a one-page single-spaced letter to me for teacher appreciation. I’m not going to read the whole thing, but I wanted to read how he started:

Dear Mrs. Smith,
I’m not a very religious person. As a child, I blindly followed the Catholic faith without really thinking for myself. As I got older, I began to question, what am I following? Why would our God let terrible things happen to the world? Is there a point? St. Kevin [which is the school that he went to], although it holds a very special place in my heart for making me the man I am today, did a horrible job trying to convince me. I thought other religions were wrong and that I would go to Hell for not being pure and that I was being tempted by Satan if I questioned my faith and other ludicrous gubbins. I was left with a sour taste of Jesus in my mouth. Then I arrived for the first time in [your class].

He goes on to thank me for having invited him to School of Community. And he also wrote, “And then I got to know you and you got to know me.” I didn’t say the right things. It was out of a friendship, out of a relationship between a teacher and a student. And he goes on to say, “One of the things I am very thankful for is that camping trip because I think I made friendships there that can’t be broken, and I recognize that there was something there that I wasn’t looking for, but I found.” At the end, he signed, “Your student and friend.” This is really what I was hoping would happen, but not what I was planning.

The Juniors are fading, and the Freshmen are coming in. So, at the end of the year, we decided to go bowling. I asked one of the Juniors who would be going, and she said, “I don’t think any of the Juniors are going. All these Freshmen are taking over.” And I said, “So, our friendship is based on what? Is it based on this exclusivity or is it based on what we’ve shared these past three years?” Needless to say, after school I had about seven Juniors in my classroom asking what time the bowling was. I guess she told them something.

I tend to get caught up making sure I do the right things and say the right things, and I miss what’s right in front of me a lot of times. At the adult School of Community, I often find myself talking about GS because, through there, I’m finding a lot of answers, I’m being reawakened to a lot of things that I’m kind of taking for granted in the rest of my life. It’s funny because I have kids who come from public schools with no Catholic education whatsoever and some who went through ten years of parochial education in the same class. Sometimes I ask questions and those kids who have the parochial education can spit out the right answer. They’ve been there, done that. But when I call on the kids that don’t have a clue, they’re just spot on because they are not relying on the right answer or what they should say, but they’re relying on their own experience. For me, that’s what GS has been: me trying to rely on what I should do and what I know, as opposed to the experience of what’s happening here. I was following something, and I was looking for who I was going to follow next, but it has become more of a following Him, and that has led to something so much more beautiful than anything I could have done on my own.