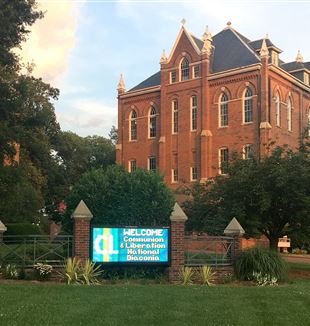 “Being with others generates a friendship, a desire for more, the continuation of more. This deeply speaks of the dynamic that Carrón presented at the Fraternity Exercises: taking a risk following not my criteria but that of Another and engaging with life.” These introductory words by Fr. José Medina rang true throughout the entirety of the National Diaconia weekend. In 90-degree North Carolina weather, the Diaconia was hosted on June 15-17 at Belmont Abbey College, a private Catholic college in Belmont, NC. In attendance were about seventy-five people from all over the United States communities, ranging from responsibles and visitors to those involved in initiatives such as the New York Encounter or the Med Conference. Present from Italy was also Giorgio Vittadini, writer, professor, and visitor to the United States communities.

The weekend began with ten witnesses, all different in content, but congruently centered around taking risks in following, proposing a work, living in dialogue with others, and the generation of friendship. This moment served as a leading thread for the weekend. It was followed by an assembly in which Vittadini conversed with those in attendance about their experiences with family and friends, work struggles, and life in the community. “It takes an encounter to understand that this is an event,” said Vittadini in response to a comment from Enrico who, throughout the years, witnessed impressive changes in the way he faces School of Community. “You need an encounter, someone who is able to see what actually happened. The Christian proposal needs a man, a human being, aware because he is humble.” 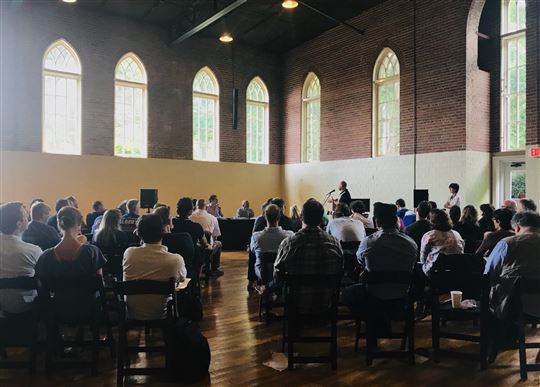 That day, the renowned Protestant theologian Stanley Hauerwas joined us for an afternoon of dialogue mediated by professor Alessandro Rovati. Hauerwas recounted his story, expressed his admiration for Fr. Luigi Giussani, and engaged with the questions that were posed to him with excitement and depth. “People who think Catholicism is dead in Italy just haven’t run into Giussani’s effect,” Hauerwas said. “It is really quite extraordinary.”

The work of the National Diaconia continued with a discussion on Alberto Savorana’s The Life of Luigi Giussani, which was released in English on December 26, 2017. The book, as Hauerwas himself put it earlier that day, is an archive rich in anecdotes and “encounters and occasions of life,” offering a glimpse into Giussani’s life and the history of the Movement. “As you think about Giussani’s biography, the most important category is experience,” said Vittadini. “Experience is able to connect the best aspects of American and Protestant culture with the root of Catholicism.” The conversation evolved and branched out to different questions and concerns, including the desire to live one’s circumstances with great freedom, accepting mercy, the importance of Our Lady, and even the recent suicide of Anthony Bourdain. 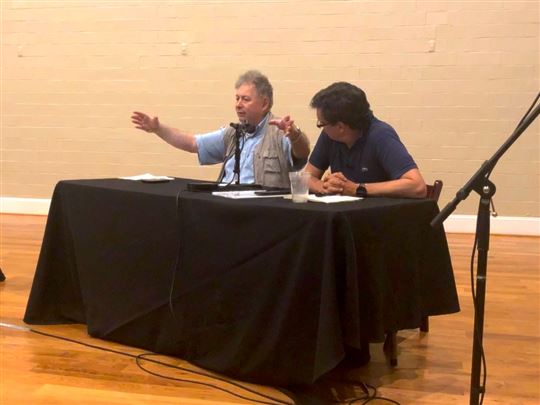 Much more was shared among friends at the National Diaconia. People were free to tackle their most urgent issues and share their intimate struggles, as well as the discoveries they made throughout the past year.

During the conclusion of those three days together, Medina shared a comment he received from someone regarding their community's response to Disarming Beauty: “While we were moved, we did not move.” “Why do I say this?” Medina asked. “Because our personal responsibility to be protagonists is that in front of something that happens, a proposal, we are to respond.” Wrapping up the weekend, he concluded, “What happened yesterday, from beginning to end, is very precious to us, not only because it was beautiful and moving, but because it is something we should return to over and over again to see it as a model. Even the fact that we started our time together with witnesses was a model.”

Though the weekend quickly came to an end, the work is just beginning. “I returned home very happy and grateful to have seen beauty in the lives of so many people. The witnesses we heard are proof that, if we are in a friendship with Christ, we can all live a full and fruitful life in the circumstances He gives us,” wrote Raffaella after returning to her home in Minnesota. She was not the only one; at the end of the National Diaconia, there was a sense of anticipation, of continuing forward with newness.

“As I looked around at the laughable diversity among us, it was evident once again that when we come together, miracles happen--an impossible unity and conversion. I can see everything more clearly,” Jonathan from Colorado said in hindsight. “At a certain point during the weekend I wrote in my notebook, ‘I am the facts and faces (You) which have happened to me. Keep looking at the facts.’”


Note: Over the summer we will be sharing some moments from the National Diaconia to provide an in-depth look at these three days. Keep checking english.clonline.org, sign up for our newsletter, and follow us on Facebook for more.