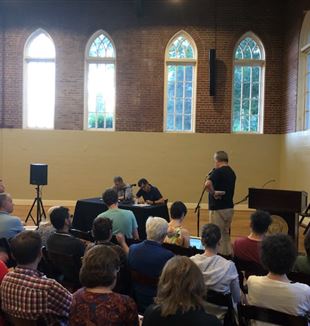 The National Diaconia meeting at Belmont Abbey College in North Carolina began with ten testimonies about the life of the movement around the country.

This was an intentional beginning. As Giorgio Vittadini, the visitor to the United States, said afterward, “We are changed by facts and events.” When we speak about “exceptionality,” we mean the “life of people touched by the event, by something else that has entered into their lives.” “This is the method of Jesus,” Vittadini said, “to follow where we see new action inside our lives and the lives of everyone.”

In the past year, this new action has entered into the worlds of business in Miami, education in Omaha, politics in Indiana, parish life in Atlanta, public gestures in New York, and personal struggle in Houston.

Multiple witnesses attested to the importance of focusing on what one has in front of him in life, not what one thinks he should have.

As Miriam said about leading a GS vacation in Florida, “I threw out any idea of how it should be.” Instead, “I’m being reawakened to a lot of things I can take for granted in the rest of my life.”

“When you give space to Him,” Alberto said about his work in Miami, “everything begins to change.”

“I don’t have to be perfect to move forward” with parish initiatives, Fr. John from Sioux Falls realized, “but in moving forward, things work out perfectly.”

What does it mean that things “work out”? “I believe in Jesus,” Paolo said simply. “I never wanted to face these things,” he said of a difficult situation in Houston. After one year, “I’m amazed that my community faced this.”

Marcia also spoke about friends from Houston. “I have a bad memory,” she said, but “because we go together with attention and desire to meet Him, I can go around and ask people: Can you remind me of what I saw?”

Another way we are reminded of our encounters with Christ is through the faces with others. After seeing one woman in Atlanta changed by Fr. Branson’s presentations of Is It Possible To Live This Way?, Marco began to “look at things again with the eyes of a new person.”

Luca in Gainesville reported that friends of one woman in the movement started attending School of Community because they noticed she was different from when they were in college. Soon, he started going himself “because I saw something unexpected happening.”

Luca added that he realized that being a protagonist “is not about what I do, but what I participate in.”

Fr. José Medina, the responsible for North America, provided a synthesis in which he identified four common factors from these witnesses that we can use in comparison with our own lives. The first is risk, “following a proposal,” “meeting people and moving forward before an understanding of what is proposed to me.”

The second is work, “doing with others, not to others.” It’s not about lectures and explanations but a “proposal that’s clear that requires my participation as well as others’.”

The third is dialogue, a “companionship that allows you to face what you don’t want to face,” a “companionship that lets you move forward before understanding.” Medina echoed an image used by Fr. Julián Carrón during the Fraternity Exercises. When the cloud moves, the people of Israel move.

Maria Teresa from Maryland described me perfectly in her contribution to the assembly that we had after the witnesses. “The movement is exploding, and I am full of gratitude.” She recalled that Fr. Luigi Giussani used to say, “He is if He changes.” “So, He is here,” Maria Teresa affirmed, “because I’m not the same person after two hours. I began this morning by begging to be open, but I wasn’t so grateful. My gaze has been changed.”