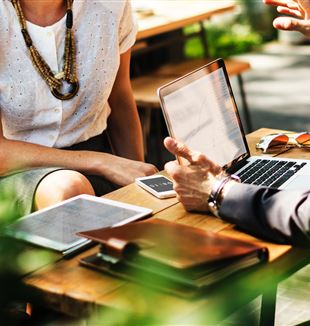 I moved here to the United States because I work for a company that does high-end lighting fixtures. In 2014, we had the opportunity to meet one of the most important lighting designers worldwide in a show. One of my colleagues even said he’d been trying to meet with her for fifteen years and he’d never been able to do it. We met and after we started working together, we had the opportunity to do a huge project with her. She had to come to Italy because she thought that since we were a small Italian company, we wouldn’t be able to take on such a big project. She decided to come with others for four days and check out everything about our company. We had to prepare for all the things they could have asked us.

Those four days were great. I spent them with my boss who has been my friend in the Movement since college. We stayed with this high lighting designer for four days, the whole time, twenty-four hours a day. The meetings were good and the last night before flying back to the US, we had dinner and she told us, “I’ve been working for lighting companies for thirty years, but I’ve never met a company like yours, people like you. Who are you?” Trying to avoid a personal situation, we said, “Oh, we are friends who work together.” And she said, “No, I get it, but who are you? Because I’ve visited all the big manufacturers in the world, but I’ve never seen something like you and the people who work with you.” It was eye-opening because it’s something you can't avoid anymore if you are real with yourself. At some point, you have to start saying who you are and who you belong to. From that moment, our relationship with her was like an explosion. She told us, “I always try to work with friends because friendship is the most beautiful thing. I have a partner in my business, let’s meet together.”

A month later, we went to Frankfurt because she wanted to introduce us to her partner who worked in Miami. This was revolutionary. I was surprised when, one day while in San José after our meetings, she told me and my friend, “I want to introduce you to a big company. Huge. Bigger than Apple. Come with me and prepare a presentation.” My only concern, then, was to have the most updated company profile ever. I called my friend who started to send me Dropbox links because we had to do the best presentation ever. When the time for the presentation came, we walked into a room where there were five or six people, and she said she would introduce us. Her introduction was, “These two guys are friends and they enjoy their friendship so much that they do amazing things with their job.” Everything in my mind was different. Of course, we talked about the company, but after that introduction, there was a different perspective because I thought that maybe she saw more than I did about my own job.

I invited her to my son’s first communion because my family was there, and I wanted them to meet. In the beginning, she thought, “Okay, I don’t know anyone.” After a while, we sat at the same table and stayed until seven or eight at night to talk with her. The day after, she called me and said, “I’ve never seen anything like that. There were people from all over the world. It’s so beautiful! I’ve never seen such beautiful faces.” Sometimes she has these faces in mind more than I do.

Another time, we were working on a huge project that was so complicated. We had two days to prepare for this project and we actually flew here to Charlotte from Miami to do so. We got there late, and all the restaurants close at nine, so we started looking for a restaurant. When we found one, we sat down, and we were in a rush because we had a meeting in the morning. We were there with her and her partner, and I said, “We have to prepare the presentation.” She said, “No, tonight we have to talk about something very important.” I said, “What is so important?” And she told me we needed to talk about our friend who is a Memores Domini, even though she did not know it at the time. When her partner asked her who he was, she said, “His friend. He’s amazing, I met him several times. But, you know what, he doesn’t have a girlfriend! We have to find him a girlfriend.” And I said, “Oh, listen, there’s a problem…” Again, this was another point where, in front of two people, I had to say what is really important in my life. So, I explained what Memores Domini is. It was another way to give space to Him.

If I think about my relationship with her, it has become the opportunity to look at my work this way. When you give space to Him, everything starts to change. It is a discovery because, yes, I have to sell things, otherwise I couldn't survive, but it’s a different approach and a beautiful occasion of conversion. It’s an occasion for your conversion, and, maybe, it can become an occasion of conversion for other people.