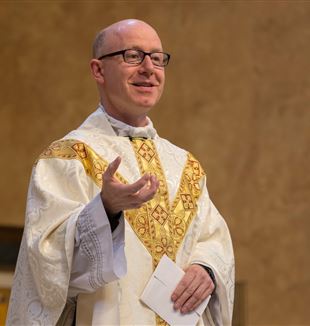 In the past year, our community has seen growth in various different ways. There is new life even in the midst of circumstances that may be perplexing or difficult. One dynamic that I wanted to share is the way the community responded to Disarming Beauty. Out of a few communities, only three of us responded, which I think was a sign that we are looking for an understanding before we follow. The first participant looked at the book in light of some families she was meeting. She is a director of religious education, she has great interest in how we educate children, and she looked at families who have a method that could also be passed on to their children, as opposed to families who have a method that, when passed on to their children, turns into moralism and formalism. The other community member who responded to this proposal looked at his work as an engineer and compared Disarming Beauty to a book that was being proposed by his boss. Then, together, they came on a panel and presented to our communities. His boss was really provoked by this new life that we have. That was the starting point.

I was really perplexed in front of this because the timeline didn’t match the way I wanted to follow it. I really didn’t do anything with it except talk about how I didn’t do anything with it. And it really became a fruitful thing for me because I had to look at what was really happening as opposed to proposing something that was not connected to my heart and to my experience. There was a fruitfulness, even though the gesture I wanted to do didn’t come about when I wanted it.

I ended up with the academic dean of a college in our diocese who was given Disarming Beauty by my twin brother. (He and I don’t talk about the Movement.) When I gave my brother the book, he was looking at The Benedict Option to bring it into the college he was at, to bring about revitalization. I kindly proposed there might be another option he might want to consider and when he read the Disarming Beauty chapter on education, he was so moved by it that he gave it to his academic dean, who is not Catholic. When he went back to see her, she was crying. He told me this, and I was moved and thought, “I need to know who she is, I need to understand why she was crying.” From that, came a monthly study in which myself, a friend, the director of academics for the school system in Sioux Falls, and the dean, met and studied this book and how it was relevant to our positions in education. We met just a couple days ago for our last meeting and the dean, who has recently accepted a new position as president of a different university, said to us as we began, “The reason that I am going where I am going and why I am now the president of [this university] is because of this book and you.” She never would have been able to take this leap, she never would have followed this path, had she not encountered this way. It’s been a really beautiful friendship, it’s been a beautiful way to engage the Movement and not to have it be a Movement turned in on itself, but to see it really as a path that can lead outside this framework of Communion and Liberation.

There have also been many struggles in the communities and within my own heart. In the past year, I’ve discovered that there are people God has given me that I can bring these struggles to: the regional responsible and the national responsible. For lots of years, I wouldn’t take my struggles there for various reasons. This past year, however, I really came to a place where I needed them, and I started to offer them the opportunity to speak to my life personally, first, and then to the decisions that pertained to my community. I discovered something incredible: I was now capable of dialogue in the places I used not to be able to be because of differences. All of a sudden, I found myself on phone calls thinking, “I can’t believe I am having a real conversation with this person.” I’d be in the middle of a conversation and I’d say, “I finally understand what you are saying to me.” Or, they’d say to me, “Ah, Father! I get what you’re saying!” And I’d be like, “What? Why do you get what I’m saying?”

The only thing I can propose at the heart of it is that, in following the ones that God has given to me, I have been in a position where people can follow me and where I can live reasonably. I’m really grateful for that understanding lately. It’s been helpful to live together in this community that we don’t have to organize to perfection in order to move forward. It’s in moving forward that something grows in its perfection. I’ve been grateful for what has happened and the proposals that were offered to us, and the way in which the companionship of my two friends involved in the Disarming Beauty project really was what made so much of this possible with the book. I would not have been able to do what I did had they not said “yes” to the paths that they proposed. I would have given up from the beginning because I didn’t have anything to propose initially. But because of this companionship and friendship, they were the place in which I stayed, and because I stayed long enough, there was a fruitfulness that was different from what I had initially planned.#DisarmingBeauty