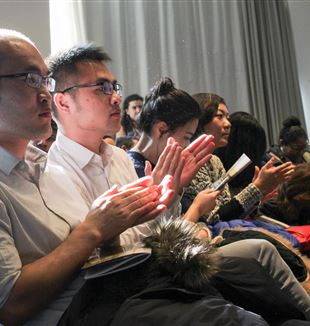 When Rose Busingye, the Rev. Pigi Bernareggi and the Rev. Solanus Benfatti took their seats this Saturday afternoon at the 2018 New York Encounter, they faced an audience larger than the second-floor auditorium could handle. Every seat was filled, and along the back and sides of the room a surplus of visitors stood or sat on the ground, eager to listen to the witnesses of two people who had spent their lives working for the sick and poor.

Bernareggi had been one of Msgr. Luigi Giussani’s first students at Berchet High School in Milan. Thanks to his relationship with the priest, Bernareggi had been moved to depart on a missionary venture to Brazil where he eventually realized his vocation, becoming a priest of the Brazilian diocese. Bernareggi thanked the Encounter for showing again that, “What we sought to build fifty years ago has now become something that is a great adventure.” As he spoke, Bernareggi maintained a serious demeanor, yet he repeatedly betrayed a disposition full of humor, making faces whenever he outpaced the translator and grinning at the audience with deep-seated cheer.

Bernareggi spoke of poverty as something deeply desirable. More than a deprivation, the priest affirmed with simple certainty that poverty “is a vocation which brings with it freedom.” He contrasted this attitude of poverty with one of misery saying, “Poverty has enormous value. Misery, instead, is an imposition.” Returning to his memory of Giussani, Bernareggi recalled the first rule of the Bassa–the location where he had first begun charitable work with his group of high school students; “Put yourself in communion; share of yourself … from this true communion is born the true fight against misery, which is called liberation.” Reaching his hands out towards the audience, Bernareggi attempted a little English; “Communion and?” “Liberation!” answered hundreds of voices. 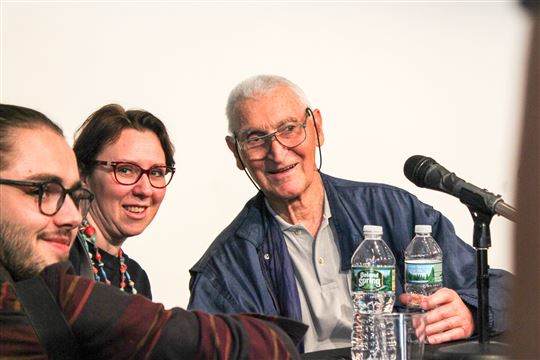 Taking over from Bernareggi, Busingye addressed the room. Busingye is a Ugandan nurse, specializing in infectious diseases, working particularly with those suffering from HIV and AIDs. She is also the founder and president of Meeting Point Kampala, an organization which cares for orphans and other youth. Busingye explained the method of the Meeting Point: “Discovering the unitary hypothesis in the explanation of things – of ourselves. Discovering the unity between me and my reality.” She described her own realization of this fact through her relationship with Giussani; “It was as if his gaze was telling me ‘I want to stay with you, you have an infinite value.’ From this gaze … I was born … I started living and working when I knew how to respond concretely to the question of who I am. … Paradoxically I became free through belonging.”

For Busingye, the work she was called to and that she continues today, is one of sharing–of communicating the origin of man’s value with everyone she encounters. Her task, as she explained, is a crucial one because African society has become fragmented in recent years. Where family bonds are strained to the breaking point, insecurity comes to dominate all aspects of life and humans begin to treat themselves and each other as objects. Yet, as Busingye proved with two moving examples, man is greater than what we see.

One of her examples concerned the story of a woman named Lucy who had been placed in a trauma center after leaving the rebel forces in the bush. Eventually, she escaped from the center and came to find Busingye, whom she had heard about from other rebels. Busingye recalled their conversation and Lucy’s pained question: “Everyone in the center … is asking what happened and I feel like a container of problems … I carry with me these problems … but who am I?” Looking out at the audience, Busingye insisted, “Man is something you go beyond. The structure of the human being and of human nature is a cry for meaning – a cry for what he’s made for.”

Busingye continued, speaking of the women at the meeting point, their capacity for joy in the face of suffering and their explanation for such happiness; “We have discovered our value and our dignity, greater than any suffering … we are full of Him, of life. You cannot reduce us to sickness.” From the certainty and beauty of this belonging, the women began to experience a desire for their children’s’ education. Busingye recalled that, though she at first expressed doubt as to how they could answer such a need, the women raised the necessary funds by making and selling forty-eight thousand necklaces. “We are discovering that our dream is beginning to happen,” said Busingye smiling. “The children are discovering themselves through mathematics, reading and writing. …” But the ultimate education, Busingye asserted, is one of relationship–of acknowledging life’s total meaning to uncover the spectrum of human emotion and even the beauties of nature. “I tell you this to prove–as I’ve gone ahead in this work for fifteen years … that it is not enough to make projects, but [you need] the presence of a person who loves … you.”

After a question from Benfatti, Bernareggi detailed the economic and social difficulties of Brazil with great passion. Upon his conclusion, Benfatti responded, “This is a situation which leads us to misery. Rose, you made this sound simple. You said all you need is for someone to come along and to love me. Is it that simple?”

There was a short pause as Busingye looked back at Benfatti. Then she nodded quietly, “yes.”#NewYorkEncounter #CharitableWork