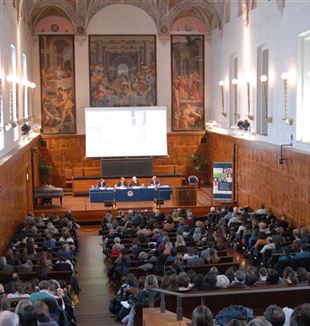 The Aula Magna of the Catholic University of Milan is almost full. 40 further rooms are video connected, from all over Italy and beyond. On Saturday, February 8, a conference on The Risk of Education, promoted by a group of associations operating in and around the sphere of education, begins at 10 am sharp. It is the last step on a journey that began three years ago, for the 40th anniversary of the first edition of Fr. Giussani’s Risk of Education, with the title: 'Allowing the human to grow: today’s educational need'.

Carlo Di Michele, a principal from Pescara and president of the Diesse teacher’s association, is in charge of guiding the work. In the Aula, Franco Anelli, rector of the Catholic University, “not only acts as our host”, says Di Michele, “but shows the great attention that such an important university institution continues to have towards schools”.

"Even in the Catholic sphere, we are reflecting greatly upon the world of education”, explains Anelli."Students have changed. How can educational processes be readjusted?” We need to innovate, but not only in terms of technology, he adds, all the more so in a globalized world where educational models that push for extreme competitiveness prevail. 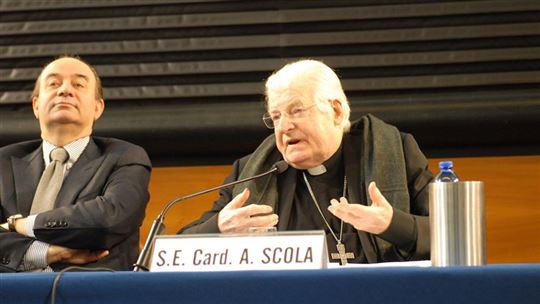 What does it mean, then, to 'allow the human to grow?' Francesco Valenti, principal and guide of the ‘Risk of Education’ Association quotes the endless comments from newspapers that accompanied the publication of the OECD-Pisa Report on the Italian school system in 2018. "Italian students can no longer read" or "good at Mathematics, awful in Science...". A series of titles that photograph the "lack" of "that inseparable relationship between education and instruction, for which so many proposed solutions seem inadequate and confused", explains Valenti: "We are interested, first of all, in allowing the human to grow in us, and to help young people live this experience”. We need places, which already exist, where freedom of education - "and in this sense, school equality cannot be reduced to a purely organizational issue" - allows an adult to risk that relationship with their students.

Word then passes to Cardinal Angelo Scola, protagonist of the conference, who gives a 'masterful lesson' on the issue. "Educational responsibility, today, reveals its decisiveness", says the Cardinal, starting from the concept of secularism in education, a term with different and often contradictory meanings, often used for its meaning 'uncritical', particularly in the relationship between State and individual. "In this context, religion, and various other world-views, are an inconvenient third party, tolerated as the private affair of the individual, within their sphere of influence.” In the school environment, there is talk of 'neutrality', a solution that "renounces a clear proposal, and reduces everything to training and learning skills," says Scola.

Education, reduced to the transmission of notions, techniques and competences, is an indicator of secularism reduced to indifference with regards to to the meaning of living: "Instead, to educate is to make possible an experience that is common to everyone, integral, intelligible and elementary". The heart of education, he adds quoting Maritain, is experience, not education or teaching itself: "A paradox which every educator must be aware of: experience guarantees every aspect of the individual's development, and training guarantees the connections between these dimensions of the individual and reality". In other words, it helps us to be in the world in an adequate way.

This judgement implies a series of elements: from the need for a positive relationship with reality - "The real is a good, it responds to man's questions and challenges his freedom" - to the relationship between authority and tradition, which “an educating community cannot solely rely upon”. But, Scola adds, we need a tradition that is alive, that is, "open to the questions of the present, a place of practice and experience, lived, firstly, by the educator or the community and then proposed to the freedom of the educating community". Because if freedom is not at stake, he says, one cannot reach truth. And it is precisely within the relationship, "in the dialogue between two freedoms", that this 'risk' is played out, as Fr. Giussani calls it: "The commitment of both is needed. Otherwise dialogue becomes a monologue if there is no freedom of the student, and the student does not make an experience if there is no freedom in the proposal". For this reason, we must rethink the relationship between secularity and education: "A neutral school does not exist precisely because of this nature of the educational relationship," says the Archbishop Emeritus of Milan.

In Italy, there are two secular school models, he continues: "The first is the one that pursues pluralism in a single school, and it is the dominant one. The other is a pluralism of schools". The first case, explains Scola, relies on a mix of ideas and values left to chance, imagining that variances and different ideas can miraculously form unifying principles "while more often they lead to real conflicts". The other model, generally practiced by equal institutions, is "aimed at guaranteeing, in a complex and differentiated society, the possibility of adhering to an educational proposal that recognizes a coherence with a precise idea of life", conscious and in conformity with the school system in which one is inserted. Beyond the fact that for real equality, economic equality is also necessary, not only legal equality, the word 'equal' is too narrow for the Cardinal: "'School' is enough. No one condemns, underestimates or does not value the state school. But, today, these two models are called to confront a cultural context that the Pope has defined as 'a change of epoch', marked also by what I call a mixture of civilizations and cultures. All this can only mark the fall of the illusion of uniformity". The task of the State, therefore, in a secular society, can no longer be to defend the right to manage a single educational model, but to guarantee education by supporting the various initiatives and objective conditions so that they can exist, respecting the Constitution, thus “unifying and guaranteeing diversity within the confines of a common civil culture". 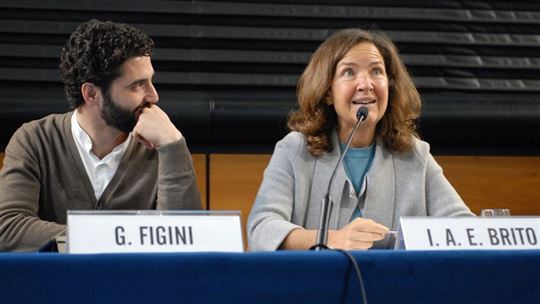 A school like this, which responds to this 'need to allow the human to grow' is possible. And it works "regardless of place and culture", says Di Michele, presenting five testimonies,. A video takes us to a slum in Kampala, Uganda, to listen to the story of Matteo Severgnini, director of the Luigi Giussani High School. It was a a school that was wanted and 'built' by virtue of the sale of paper necklaces by a group of women with AIDS, reborn through their encounter with Rose Busingye: "They wanted a place where their children could experience the discovery of the value of the 'I', as had happened to them.” And this is one of the pillars of the school, together with the discovery of the 'other', the fact that reality is a teacher and that we are made for happiness. From the story of a girl who says that she was born on the day she was welcomed into the classroom by a smile, to the girl who, in reading Leopardi and his ‘Night Song of a Wandering Shepherd in Asia’, found a new friend “who has the same questions as me”. Severgnini explains that all this is possible because "just like for that girl and for Leopardi, the heart and the stars are the same for everyone".

A companionship is needed, reiterates Ramzia Saleeva, thousands of miles away and lecturer in Italian at the University of Astana, Kazakhstan: "My students’ questions are the same that I ask myself. In that we become companions, friends". It is a mutual growth that makes people change, even their parents notice it. "No strategy: the only attempt I have made is to share their fatigue in studying, their tiredness, their joy. And I do this by looking for a 'human' point in my life to look at and follow in my discovery of the meaning of things. This is education. It is the same with my daughters at home: first of all, they look at how I live".

A visit to Florence, to the Mandela Forum, a small building in the Tuscan capital, which, for some years now, has hosted the Colloqui Fiorentini: "There were four thousand students and teachers at the last edition, from all over Italy and beyond", says the director, Professor Pietro Baroni. Three days of readings, communal work and dialogues with 'experts' to gain a deeper understanding of a specific author: "Last year, the protagonist was Leopardi". The formula is simple. Here, we do not bet on a strategy like 'Leopardi, poet of pessimism', but on words: mystery, beauty, love...Thus, the young people recognize them as their own".

A stop in Portugal, in its capital, with Isabel Almeida Brito and her account of the birth of the Colégio de Sao Tomás, of which she is rector. According to the rankings, it is one of the best schools in the country, and has almost 2200 pupils in three different locations. "It was all born from reading Fr. Giussani’s Risk of Education when I was a practicing lawyer". She was so struck by it that, years later, when she returned to Portugal with her husband and children after a period in America, the idea arose: "My life, as a wife and mother, could have been a beautiful private adventure. But I felt challenged, by myself and by my faith, to live fully doing something for everyone. And the idea arose again. And, with the help of many friends, it was fulfilled".

READ ALSO – Siberia: "The heart of the problem is love”

The morning concluded with the story of Giovanni Figini, director of the school of the Cometa di Como association, "a school that was not born from an idea, but from a welcome". Or better, "it was born thanks to that first child in my parents' care, my brother", says Figini. Since then, many children have passed through Cometa, and many still do. "Realizing that that first 'stranger' was loved... How could we not also love the many children who came to study with us in the afternoon?” It is a story in which he grew up, says Figini, "but which I had to earn back". So, over time, this high school was born, "a place, first of all, for the many children that nobody wants and that would lose themselves". He remembers one of the children who was 'uncontrollable' but who, during his first period of work experience in a bar, earned the compliments of the owner: “He said that there he had to work 'for real'. Today he is a doctor". So one has to start from there, from that desire of 'for real'. In other words, this should be accounted for in the programs proposed in classrooms: carpentry courses, bartending and catering, tailoring. "Today, schools propose 'for real' jobs. And you see a sort of resurrection of their humanity, the young people become protagonists."