On 27 January, in one of Novosibirsk’s most important cultural centers, the "Pobeda", a public meeting took place with Matteo Severgnini, who came from Uganda to talk about his work as director of the Luigi Giussani High School in Kampala and the school’s educational method. The title we chose for the meeting was: "The value of the person". After the interventions of the guests, we chose to screen the film Greater by Emmanuel Exitu, which recounts the story of Rose Busingye and the women of Kireka, a slum in Kampala, suffering from AIDS.
What we wanted to emerge was that education is the encounter of my “I” with that of the other, and that this encounter is able to transform both.

This is exactly what happened to me a few years ago. Communion and Liberation "happened" to me through the encounter with my friend Aleksander Bayanov. Initially, we met to have a beer together, and Aleksander was the only person with whom I could talk about the philosophy of Nicola Cusano and medieval Scholasticism. Then he invited me to School of Community, so I got to know Luigi Giussani and his book The Religious Sense, which struck me a lot, because it raises questions that I think are fundamental for me: the link between faith, reason, experience and reality.

Before this encounter, I always considered myself an agnostic. Initially, for me, Giussani's books were simply a clear example of excellent social philosophy. I am neither sentimental nor used to making decisions based on emotions. The very content of The Religious Sense helped me to realize that faith does not contradict reason, and that faith in God is deeply reasonable, totally corresponding to the reality in which we live. I thus recognized that I have actually believed in God for a long time, but that until this encounter, I could not admit it to myself. My path to the recognition of God's presence in my life has, therefore, been extremely rational, fully based on reality, on Giussani's thought. And it happened through the encounter with my friend Aleksander and with the movement.

In preparing the event for 27 January, it was important for us that it should emerge, through the story of the Ugandan experience, that good can only be born when we recognize that it has an infinite value, that "our I is worth more than the universe.” We knew that AIDS patients would be at the meeting, a disease that it very prevalent in Novosibirsk, as would people who belong to associations dedicated to the prevention of this epidemic, who are facing not only the terror and incomprehension of society, but also the indifference of state bureaucracy. We perceived the risk that people expected Matteo to speak about a “miraculous discovery”, capable of alleviating the pain and emptiness that each of us feels inside ourselves, or some social or medical technique, some "ready-made recipes" to solve these problems. But this did not happen. 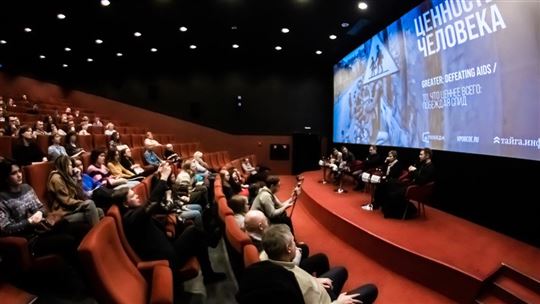 The experience that Matteo recounted was not an approach based on a technique, on sentimental abstractions or moral observations, but it revealed how love can actively become part of people’s lives, that joy can invest every moment, even in the midst of pain. In the film we projected Rose says: "We have an infinite value that no pain, no sin, no virus can destroy. You are this infinite value! And you carry within yourself the responsibility of this value". It was evident, in the story of the women from Kireka, or from the testimonies of the students of the school that Matteo recounted, that it is not about beautiful words, but it is about what defines the life of each person, the value that everyone has, wherever they live and whatever they have done in life. It was easy for everyone present to grasp the significance of this.

After Matteo, two people who work in the educational field intervened: Tatyana Tripolskaya, professor at the State Pedagogical University of Novosibirsk, and our friend, an Orthodox priest, Fr. Anton Kovalenko. Tripolskaya, at the beginning of her speech, thanked the organizers saying that what she had just heard from Matteo had challenged her role and what it means to educate someone. She then spoke about how the contemporary model of education promoted by the Russian State, every year with increasing strength, excludes the problem of the person and their education from the school process, focusing only on functionality and performance. Finally, she stressed how important it is to find the link that unites instruction and education, practices that are linked deeply. 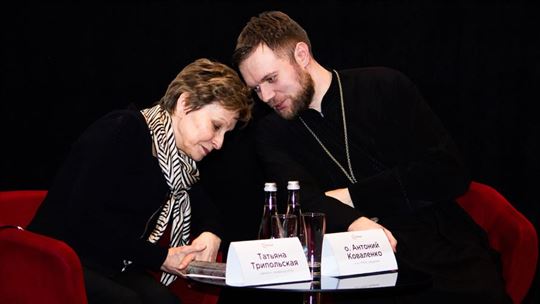 Fr. Anton spoke about how important it is to recognize not only the hell that man is able to generate around himself, but also the hell that every man has inside. This illuminates the dizzying depths that man touches when he is launched into the search for himself and, at the same time, the deception that he can devise to reject the risk of his own freedom. He then recounted how, in his experience with young people, he realized a mistaken conception of freedom and love. "Freedom," he said, "is not permissiveness, but the possibility of being oneself. And love is not an emotion or a question of endorphins, but the desire to truly know the other person.” Fr. Anton concluded by saying that the experience recounted by Matteo is what the Church should be talking about, instead of proposing the construction of walls as a solution.

Margarita Loginova, a well-known journalist in Novosibirsk, who often speaks about AIDS by denouncing the stigmatization of sick people, intervened from the audience. She thanked the speakers and emphasized how important it is to face these things openly: one can discuss a lot of technical, medical and preventive solutions, but the heart of the problem is love.

My friend Aleksander, moderator of the meeting, says: "To edit the Russian subtitles for Greater, I had to watch the film five times. Only on my fifth attempt did I understand the meaning of a sentence that, at a certain point, one of Rose’s women said: ‘I feel healthy’. There, again, I was struck by the fact that that unexpected and incredible Love that overwhelmed the life of Rose, Matteo, all these women and their children, is the same Love that overwhelmed mine too. I began to experience great joy and tenderness towards myself, my friends and all those who helped us organize the meeting. I have always wondered how to communicate the experience of the movement to people who are not only distant from the Church, but totally alien to faith. At the end of the meeting, the gratitude of friends and people surprised me a lot: gratitude for this sign of attention and love not only towards those who are sick, but towards everyone present".#Education