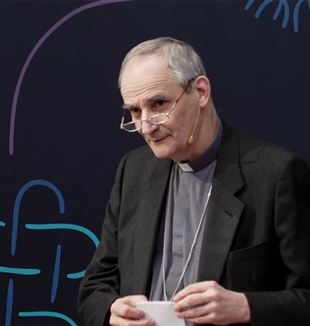 Cardinal Matteo Zuppi does not hide behind words. Fear of Coronavirus? "Yes, you feel vulnerable." Why do we forget the deepest questions in life? "As Psalm 49 says, "people who have wealth but lack understanding are like the beasts that perish.”” Was the Church surrendering when it cancelled Mass? "At first, when I saw that the Eucharist was forbidden but restaurants were still open, I thought something was wrong. Then everything was closed and now I am happy to celebrate again with the people, but I say to everyone: be careful, especially out of respect for the weakest."

On the evening of Monday, May 18, via video link, the Archbishop of Bologna spoke alongside Fr. Julián Carrón in a meeting entitled "Bodies and souls in the dizziness of the pandemic." Both have recently published texts about this dramatic period (Zuppi, Non siamo soli. Credere al tempo del Covid-19 [We are not alone. Believing in the time of Covid-19]; Carrón, Reawakening Our Humanity. Reflections of a Dizzying Time). In the diversity of their language, the President of the Fraternity of CL and “Don Matteo” found themselves very close: both acknowledge how the fact that we are all living the same situation facilitates communication. Francesco Bernardi, president of the cultural association Incontri esistenziali [Existential encounters], recalled the presence of the cardinal in the Cathedral, in San Luca, with the taxi drivers and nurses. He quoted Mayor Virginio Merola, of the Democratic Party, who, at the end of his second term, will make himself available to the Bishop, "who, for him, was one of the most significant meetings of recent years.” Zuppi insisted upon the encounter, closeness, and warns against the "trivialization of relations": "Paradoxically, through distancing, the pandemic has brought us closer, has initiated a profound change. It is a great heritage of relationships which is not to be wasted."

Fear, one of the largest shadows cast upon the world. Carrón captures an aspect that should not be taken for granted: "Everyone, wherever they are, is forced to move in front of an event which is unknown in size and duration. Even those who thought they could get away with it had to surrender to reality. Those who had closed themselves off in the comfort zone of everyday life could no longer escape reality." Zuppi elaborates: "The epidemic revealed what we are, vulnerable but also capable of unsuspected energies. The world has entered our homes to change our lives without regard. It is a humiliation, if you think about it: in this age, the most narcissistic and individualistic in history, we have discovered that, as Pope Francis says, we cannot delude ourselves into thinking that we are living healthy in a sick world. The "bubble" in which we find ourselves at a certain point bursts and we find ourselves fragile even without getting sick.

Four figures appeared upon the computer screen, quoted in books, which mark the path. Abbé Pierre, who dedicated himself entirely to the poor: "Evil is a mystery that we believe we can erase by ourselves," says Zuppi. "Then come the shocking images of trucks loaded with coffins and pain." The writer Paul Claudel and his tormented conversion: "Pain," adds Carrón, "enters with an outstretched leg and awakens the deepest questions of living, takes away the torpor into which we can fall. Not even Jesus was spared the anguish that made Him ask God "why have you forsaken me?" and death. But he was able to face them with the great presence in his eyes, that of the Father.” The Cardinal insists: "Well-being favors forgetfulness and makes us live suffering as a predicament to be hospitalized or as a guilt to be hidden.”

The face of Etty Hillesum, who could have escaped the extermination camps but did not want to abandon her people: "We must be travelling companions," Zuppi clarified. "Today, people have twisted, confused questions. Isolation has revealed great fragility, but we must get involved. The risk we face is to act like big brothers, repeating "I told you so" or "you finally understood." Our attitude must not be the older brother’s “being right”, but the overabundance of the father's mercy.” The smile of Vietnamese bishop Van Thuan, imprisoned by the regime for 13 years: "He could have cursed power", Carrón remarks, "instead he accepted his condition as the call of Another and saw his humanity and the historical impact of his vocation flourish behind bars. One can live everything, from prison to pandemic, as a response to a call. It is a choice of freedom."#Coronavirus