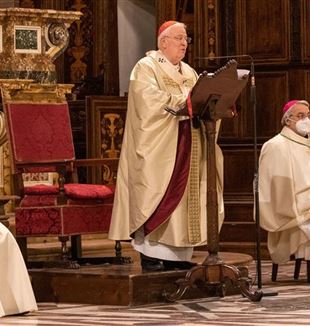 Dear brothers and sisters, I am moved to preside over this Eucharistic celebration on the centenary of the birth of Fr. Luigi Giussani and the 40th anniversary of the foundation of the Fraternity of Communion and Liberation. I affectionately greet Auxiliary Bishop Marco Salvi and dear Fr. Julián Carrón, for many years at the helm of the Fraternity, to whom I am bound by a deep friendship, and all the priests present. And heartfelt greetings to you, brothers and sisters, and dear children. I am happy to be able to be with you, and to see so many of you, and living guardians of the memory of the founder of Communion and Liberation.

Let us all pray together tonight that, in memory of Fr. Giussani, your Fraternity may receive the strength and hope from the Lord to pursue the path of holiness that sprang from the paternal heart of Fr. Luigi and is followed, through the commitment of a lifetime, by so many young people. Today's celebration is one day early because tomorrow evening I will have to be in Florence to preside over the historic meeting of the bishops and mayors of the Mediterranean. It is a legacy of the "holy" mayor Giorgio La Pira, which I wanted to revive and which we hope will bear fruits of coexistence and collaboration in our world, especially in Eastern Europe, where peace seems to be seriously compromised.

The day of the anniversary of Fr. Luigi's death falls on a very significant holiday for the whole Church: the feast of the "Chair of St. Peter". It is not a celebration born in the Middle Ages to celebrate the papacy, as some may think, but comes to us from the first centuries of the Christian era, when the communities of believers already commemorated the role and the magisterium of the first among the apostles: Simon Peter.

It was not so much the feast of the first Pope as it was the celebration of the teaching of an apostle who had received the words of divine revelation directly from the Lord. Jesus himself had assured him that the Church, which was entrusted to him, would never be overcome by the forces of evil. "What counts and what moves the glorification of this ‘Chair’ – says a famous historian – is that it is, among so many systems, theories, hypotheses, which contradict each other and fall one after the other, the only one that, undefeated, has made the great family of Catholics certain for two thousand years; that even on this earth it is given to men to know certain immutable truths supreme: the true and only ones that satisfy the anguished spirit of man" (cf. Galassi Paluzzi, S. Pietro in Vat, II, 65). 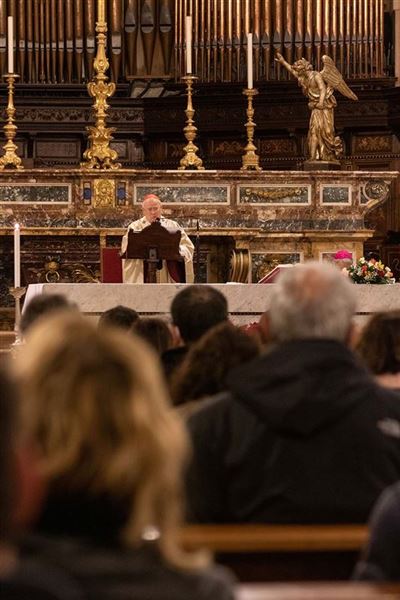 What the Lord Jesus entrusts to Peter, even in the simplicity of the words, is a superhuman power: "whatever you bind on earth shall be bound in heaven, and whatever you loose on earth shall be loosed in heaven". It is power that goes beyond the limits of time; it is exercised on this earth, but its value transcends into heaven. The apostle himself seems to be well aware of this responsibility, left to Peter and his successors, when, in his letter to the Romans, he invites the first pastors of the Church to govern "as God wants you to be; not pursing dishonest gain, but eager to serve; not lording it over those entrusted to you, but being examples to the flock.” It is therefore a service rendered to the whole community with love and sacrifice, not a power to be exercised arbitrarily.

It is significant that Fr. Giussani's death occurred on the very day of this feast, on the date that commemorates the "Chair" of the Bishop of Rome.
Fr. Luigi, I know from personal experience, was a man of deep humility and great obedience to the Pope and the Church. And he invited all his children to fidelity, because only united to Peter can one fully live the experience of the Church and experience the grace of the Lord. St. John Paul II often recalled that "the ministry, entrusted to Peter and his Successors, of being the solid rock on which the ecclesial community is supported is the guarantee of the Church’s unity, the safeguarding of the integrity of the deposit of faith and the foundation of the communion of all the members of God’s People.” Fr. Luigi has always adhered to this Magisterium, and it is on this that he has modeled his teaching and his entire life.

Dearly beloved, on this centenary of Fr. Giussani's birth, and 17 years after his death, we wish, together, to thank the Lord for what He did with him, and for what He continues to do with the movement of Communion and Liberation.
Many of Fr. Giussani's initial insights are still valid today. Let us think about the emergency concerning young people, which gave rise first to GS (Gioventù Studentesca), and then to CL. Giussani realized, much earlier than others, that in the apparent good health of Italian Catholicism, a deep crisis was about to emerge, which involved young people above all. These young people, although educated in the Christian faith, were distancing themselves from the Church. It was for this reason that Giussani obtained permission from his superiors to teach religion in a state high school in Milan, where he continued to teach until 1967. Among the many testimonies I could cite in this regard, I would like to mention that of Benedict XVI, who dwells on this aspect.

Read also - "Fr. Giussani, everything defined by the relationship with Christ"

In an audience to the movement of CL on March 24, 2007, two years after the death of Fr. Giussani, the Pope emeritus said: “My first thought goes to your Founder, Mons. Luigi Giussani, to whom many memories bind me and who became a true friend of mine […] Through him, the Holy Spirit raised in the Church a Movement, yours, that would witness to the beauty of being Christian in an age when the opinion was spreading that Christianity is a difficult and oppressive way to live. Fr Giussani then committed himself to awaken in youth the love for Christ, ‘Way, Truth and Life’, repeating that only he is the way towards the fulfilment of the deepest desires of the human heart, and that Christ does not save us regardless of our humanity, but through it.”

Brothers and sisters, keep alive the charism that the Spirit has given you, and may He give you the strength, as did Fr. Giussani and his first companions in this beautiful experience, to proclaim the Gospel to young people. Get involved in schools, universities, the world of culture and work. In fact, as Pope Francis writes in Evangelii gaudium, it will be through friendship and attraction – that is, through the fascination of its beauty and truth – that the Gospel will be effectively accepted by the new generations.#100Initiatives