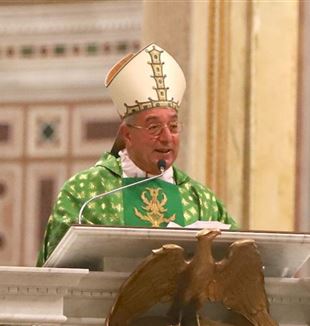 Fr. Giussani died on February 22, 2005. Thousands of people, across the world, have been reached by the Christian proclamation thanks to him, directly or indirectly through the movement of Communion and Liberation. Every year, in many dioceses, friends of the movement gather on the anniversary of Fr. Giussani's death to celebrate Mass with their bishops.

This year's celebration takes on special significance. Fr. Giussani was born on October 15, 1922: I can imagine that in the months to come, until the fall, the movement of Communion and Liberation will plan a series of events to remember its founder one hundred years after his birth. These initiatives will allow for a better understanding of various aspects of the priestly figure and apostolic work of Fr. Giussani. We will have to ask ourselves what he left to his spiritual children and, more generally, to the whole Church. It is an advantage for everyone that those who do not know Fr. Giussani have the opportunity to get to know him, and those who do know him will have the opportunity to discover new dimensions even in what they already know about him.

Let us, however, still allow ourselves to be enlightened by the Word we have heard. In the eyes of David, Saul is not a king like the others, but he has been consecrated by the Lord: the Lord has bound himself to him by choice, in a pact and a consecration. And David respects this. This means that he recognizes and honors not only Saul but what God has done within him. His criterion of discernment and judgment lies not in what Saul may have done, actually against him, but what the Lord has done for Saul. It is a different way of seeing, judging and acting. 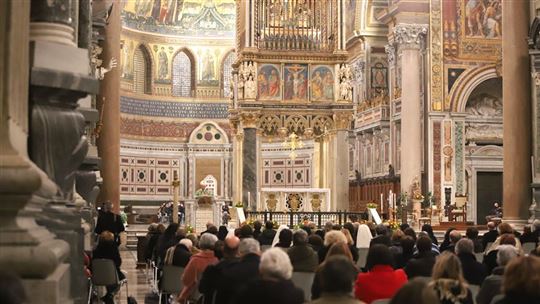 Writing to the Corinthians, Paul states that "the first man, Adam, became a living being; the last Adam, a life-giving spirit" (1 Corinthians 15:45). Every man and woman, who recognize their common origin in Adam, also recognise this difference between the first and last Adam. While the first received the Spirit that the Father breathed upon him, the last himself became a life-giving spirit. He blew the Spirit on us when, after His resurrection, He blew on the apostles' faces saying, "Receive the Holy Spirit" (Jn 20:22).

The verb that John uses in Greek - to blow - is the same verb that the Greek Bible of the LXX uses to describe the gesture by which God blows on Adam to make him a living being (Gen 2:7). The Lord gives us His Spirit which is for reconciliation, the forgiveness of sins and mercy towards sinners.

In David, this very Spirit is already mysteriously at work, leading him to forgive Saul and save his life.
This is the love to which the Lord calls his disciples and of which He speaks to them in today's Gospel. Jesus' words are fulfilled in the great invitation to be merciful as the Father is merciful to us (Lk 6:36).
The invitation is more precisely to become children of the Father, and the Son cannot but be very similar to his own parent.
This Word that has been accepted, and this now brings us back to Fr. Giussani.

There are certainly many interesting aspects to Fr. Giussani’s personality. However, there is a fundamental aspect of the person of Fr Giussani that fascinated those who met him and that continues to fascinate those who meet him through his writings, and it is what I would call the realism of faith. For him, faith is certainly not an indistinct feeling or an inner inspiration that drives to ethical and social commitment. But neither is it simply adherence to a doctrine that remains extraneous to life. Fr. Giussani has an acute perception of the reality of Christ, of His present actuality, of His uniqueness, so that we must recognize that He, Jesus, has "unmistakable features even with those that He Himself created as a sign of Himself" (L'attrattiva Gesù, Milan 1999). Nothing can replace Christ. Through the events of history, Christ remains the subject of an initiative that is His alone. And when Christ makes himself known for what He is, nothing appears more decisive than the relationship with Him. Fr. Giussani lucidly expressed the depth of his relationship with Christ: "It is the life of my life, Christ. All that I would like is summed up in Him, all that I seek, all that I sacrifice, all that evolves in me out of love for the people with whom He has placed me" (To Give One’s Life for the Work of Another, 2022).

It is from the relationship with Christ that the missionary impetus that characterized the activity of Fr. Giussani derives. A man in love with Christ desires to make Him known to others. Whoever knows Christ, on the other hand, cannot help but look with yearning at the lives of those who attempt to be happy in a thousand ways and do not succeed. And, in fact, without Christ, people lack what fulfills their expectations in moments of joy and what gives them hope when it seems that there is nothing more to hope for.

For Fr. Giussani, mission can never be a solitary effort. What makes the Christian proclamation credible is, in fact, first of all the unity of believers. The unity of which Fr. Giussani speaks is a manifestation of Christ's action among people precisely because it is something that people alone could never achieve. Human beings easily get together to oppose someone. The unity of believers, on the other hand, is not against anyone. It is greater than the miseries of each person, and it is also greater than the successes that each person can achieve alone and the successes that can be achieved together. On the other hand, the unity of believers of which Fr. Giussani speaks is the unity of a "movement". This is, after all, what Pope Francis reminds us of when he speaks of synodality: believers are not united when they are firm in their own convictions or positions, but when they discover that they are walking together to follow Christ.

For Fr. Giussani, the following of Christ has a final and definitive guarantee in obedience to the authority of the Church and in particular to the authority of the Pope. There is nothing servile, formal or opportunistic in the obedience that Fr. Giussani preached and lived. Fr. Giussani obeyed the Church because he wanted to obey Christ and he recognized that the relationship with Him passes objectively through the relationship with those who have the task of guiding His Church.

Thus we return to that relationship with Christ that defines the person of Fr. Giussani. This relationship becomes a missionary impetus in him, a burning passion for the unity of believers, free and unconditional obedience to the Pastors of the Church. It is to be hoped that these dimensions of Fr. Giussani's life and work will be understood and lived out first of all by those who follow in his footsteps within the movement of Communion and Liberation. But they will only be able to do so to the extent that each of them discovers how, through Fr. Giussani, the offer of Christ's friendship reaches them as well.

May the realism of faith always be alive in us: life place us in front of difficult discernments, in favorable situations in which we are given the possibility of doing good rather than evil.
May our criterion for judgment and action be guided by the desire to be more like Christ. Amen.#100Initiatives