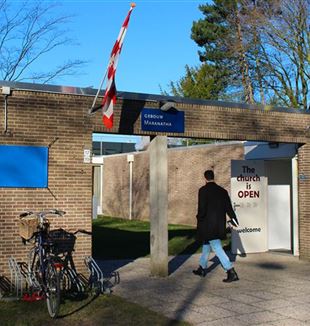 Since the beginning of the pandemic, we have felt very much accompanied by the movement through the words of Julián Carrón: first by his letter to the Fraternity, then the booklet Reawakening Our Humanity, and finally the interview that Fr. Julián gave in May to a Dutch Protestant magazine, De Nieuwe Koers, entitled: "Expose your faith to crisis and learn what it means to live".
Throughout the first lockdown, every morning at 8:15 a.m. we would meet online to read a page from Reawakening Our Humanity, and then pray the Angelus. This simple gesture allowed us to experience - also giving us a proposition for “later” - what a day - any day - can become when it begins with a moment of silence, that is, of questioning and openness to a proposal for life that has reached us and reaches us now.

We sent the pdf of the translation of that booklet to many people. Without realizing, we even sent it to the miller of the windmill that we should have visited with the Franken teens before Covid prevented the trip. He replied, "I enjoyed reading and re-reading Julián Carrón's booklet. I have now saved the text on my laptop and I will return to it often. In this time of uncertainty, you have to decide anew each morning when you wake up: do I dare and want to believe in Christ's help and protection, or do I let myself be carried away by the fear that constantly arises. I wish you much strength in your fellowship with the young people, who must be full of questions. God willing, I will see you soon at the mill in Vessem!".

For us, time of "confinement" at home has been a fruitful time for translations. In addition to Reawakening Our Humanity, we were able to publish The Radiance in your eyes in Dutch - which struck and continues to strike the many who read it, so much so that they often order copies for friends, even today -; Education. Communicating One’s Self by Julián Carrón, which we will present during an online meeting on April 24; and Letters on Pain by Emmanuel Mounier, which, after an online presentation on January 30, we have proposed as the text to accompany us during this period. I have always care greatly for the Dutch translation of texts suggested by the movement. When I returned to Holland in 2012, I began to translate the literary texts that had been decisive for my encounter with CL at university: Peguy, Claudel, Miguel Mañara... It was a literary way for me to enter into the spirit of Christianity, and it has been the path that has allowed me to also propose these texts to the young people of the University of Tillburg. These translations were also occasions for public presentations and meetings. We then decided to propose Fr. Giussani’s writings in Dutch as well: The Risk of Education, The Religious Sense, Generating Traces in the History of the World. This is because what you read in your mother tongue enters more deeply into your heart, touches your emotions, enters into your daily life. But I realized that this need, during a time like the pandemic, became even more urgent: we had to offer the possibility to live the movement, at this level of intensity, within the present situation.

For this reason, unlike what we had done up to now, we decided to use the energy we had to translate texts that were more connected to the present moment. This allowed me and some friends to live the experience of the movement not as a generic path, but as a present companionship within the historical circumstance that we were living. Carrón, in his dialogue with the Protestant magazine, repeated that it often seems as though Christians experience other problems, while they have the same concerns as everyone else. Reading these texts has been a way for me not to feel locked up at home, but to be launched into life.
It is not that what we did in the past (translating only the "great" texts) was wrong, but the need today for something to accompany us daily has become more urgent. This is why we have proposed Mounier's Letters on Pain, because they are pertinent to this moment.

Since September, in the university chaplaincy, I have been offering a course in Dutch on The Religious Sense, which soon turned into an online course. This, however, has allowed university students and young workers like Edith, Marjo, Monique, Veerle, Dorothé, and Willem, who live in other cities, to participate in the course, which otherwise would not have been possible. For example, we have only ever met Edith, who lives in the province of Zeeland (where there is no one else from the movement), online, for now. Hans van Mourik Broekman (see article in the February issue of Traces), a Dutchman living in Liverpool, whom we met in January, is also connecting. He is writing a catechetical book to be used in his public school (where he has to teach ten religion classes a year) and asked me to read the drafts. I was struck by his willingness to engage in discussion and his freedom to accept suggestions for correction. I was struck by the fact that in one chapter he wrote that "the encounter with Christ today is not like two thousand years ago." I took the liberty of telling him that, in my experience, he should have removed the "not" from that sentence. A fascinating and helpful dialogue ensued. In him, I see a person who lets his life be turned upside down by his encounter with the Christian community. Watching him I understand the meaning we give to the word "encounter." What Carrón often repeats is true: it is from the last person to arrive that we learn what the charism we have received is.