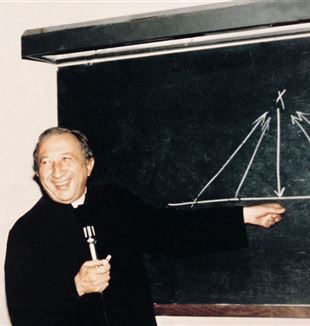 Almost twenty years had passed and I still remembered his name. On September 11th, I saw him on CNN, commenting on the attacks, and I never forgot the impression his words made on me. The day of the attacks my family and I were on a flight to the US, and it was redirected to Canada, where we spent several days as refugees watching television. And that priest–so particular. Then I never tried to find out more about him, who knows why. But in the middle of the lockdown I wanted to know what he had to say today about the pandemic. I googled his name: ‘Lorenzo Albacete. ’”

Hans van Mourik Broekman was born 54 years ago in Syracuse, New York, of Dutch parents. He attended high school in the US, graduated in classics from St. Andrew’s University in Scotland, and began his career in education, first as a teacher and principal in a number of Catholic schools in America and then in Liverpool, where today he directs Liverpool College, one of the oldest institutes in the city. In 2015, he succeeded in converting the status of the college from an “independent school” to an “academy” financed with government funds. The result? It made it possible for everyone to obtain an excellent education, which in the UK is possible only for the children of the upper classes. This operation was described by Andrew Adonis, the Labour Party parliamentarian and minister under the both the Blair and Brown governments as “perhaps the greatest breach in the Berlin Wall that separates the private and public sectors of instruction that we have seen in the last decades.”

Liverpool College, like other schools in the UK, was closed last year because of the COVID emergency, with lessons continuing online. Cooped up at home in front of his laptop screen, Hans discovered that he could not learn what Fr. Albacete thought about the drama of the global pandemic because the Puerto Rican priest had died in October of 2014. But in his internet research he came upon a long television interview Albacete had given, which had a strange title: “The Meaning of Life.” “It was a dialogue on his book God at the Ritz. He spoke in such a fascinating and convincing way. He looked a bit scruffy, but his theology was profound. At a certain point he referred to Fr. Luigi Giussani and the Movement of Communion and Liberation, without explaining who the first or what the latter were.”

Today, Hans tries to look at what was happening to him in those months. The world around him was in upheaval because of the virus, but in the microcosm of his home, things seemed calm. And yet, far from work and his young people of the school, he felt a strange need. “It was the need to feel alive, a desire for hope, an ability to depend on my faith and on Jesus, an almost desperate need for faith to return to having a meaning. I was looking for something to reactivate me in a situation that seemed inexorably flat. I hadn’t lost my faith; I was always Catholic. But in that moment, I was looking for something that would make it vital again.” 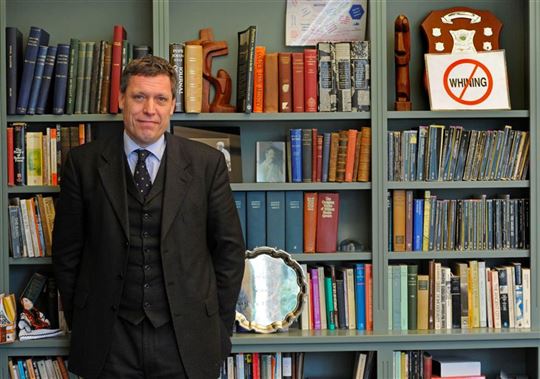 The principal went back to researching on Google. Luigi Giussani. Communion and Liberation. He bought God at the Ritz on Amazon, and then The Risk of Education. He read them straight through, and they had an explosive effect on him, a man who teaches Introduction to Christianity (as part of the government curriculum for British schools). “At best, the students grasp its historical and cultural interest, but Christianity is of no importance to their life.” Right away, he sensed that Giussani was “a genius of education, a star of pedagogy.” He says that some of his concepts literally opened his mind: “reality,” “experience,” “verification,” “desire.” “The idea that reality is something greater than what can be demonstrated is absolutely extraneous to the Anglo-Saxon pedagogical culture, which wants to teach only that which can be demonstrated. Giussani, instead, says something that sounded revolutionary to my ears: “Reality becomes evident in experience.” And then desire: our educational system seems custom-made for squelching the desire of students. And verification: what you are taught should be taken as a working hypothesis to be verified in experience. Giussani didn’t invent these ideas, but in him they take on a methodological value that gives a person instruments for teaching and learning anything.”

But when Hans finished reading the books, he still thirsted for more. And once again, he used the one instrument available to him, the internet. “The official CL sites only increased my curiosity, but I couldn’t find any contacts for someone here in Liverpool.” He asked priest friends, but though one had heard about a group in Cambridge, he was unable to make contact with anyone. Finally, “on the sixteenth page of Google, I found an article on a group in my city, with the name of a priest I know. When I called him, he said that he knew them and said a Mass for them every now and then.” Overhearing his phone conversation, Eleanor, Hans’s wife, realized that she knew Loredana, an Italian who sometimes posted on a WhatsApp chat some links from the CL site. What he was looking for was closer than he thought. Hans contacted Peter, the local leader of the Movement, and began attending School of Community via Zoom. “I’ve been participating in these meetings every week for a few months now, and recently when I met them in person I unexpectedly felt like they were already my friends. How can you be friends with someone you’ve never met personally? It’s a bit like the question that Giussani asks us: How can you follow Jesus if you can’t be with Him physically?”

Eleanor also began participating in the meetings. A couple of friends, curious, asked to join in too. At the beginning of January, Hans also participated in the assembly of the English-speaking communities of northern Europe with Julián Carrón. “Everything seemed so simple and clear, no reference to strange philosophical or psychological theories. The point was: Are we interested in living with God or without God? Do we want to be children or do we settle for remaining orphans? I heard truly powerful testimonies and so many reminders about what is essential in life.”

In recent months, taking advantage of the time freed up by the lockdown, and driven by the gnoseological shock produced by Giussani’s thought, Hans began writing not one but three books. “The first is entitled Confessions of a Headteacher and is the critical rereading of my professional itinerary in the light of The Risk of Education. This work has forced me to return to the reasons I began teaching and to reflect on the challenges facing me today as the director of a school that is not Catholic, one in which all the visions of life are considered.” The second book is Full Life –Letters to My Students: “It collects all the advice I’ve given students and teachers over the years before coming upon the thought of Giussani, and explains when and why I was wrong, and when, instead, I said the right thing without realizing it.” The third, still being written, is The Experience of Christianity. His intention is to try to explain Christianity to those who have no experience of it. “It seems to me that Giussani was in front of young people who knew all the Christian forms, but for whom faith had no relevance to life and nothing to do with their desires. I have in front of me students who have no idea what Christianity is, and I’d like to explain what it is, to describe what it feels like to be Christian, and something about the kind of experience you have in living your faith.”

Read also - Anniversary Masses: "That we may continue to better serve the Church"

One of Albacete’s affirmations on CNN on September 11th that most stayed in his mind was something along the lines of, “When I saw the images of the airplane hitting the first tower I recognized an ancient flame in myself. I knew that religion could do something of the kind, because I knew what it was capable of doing in me.” Hans says that he was struck by the sincerity of those words and their radical nature. “It was the same type of impression that made me read Fr. Giussani. I thought, ‘It’s true, and it makes sense. It makes sense for me.’ The things I read in the pages of this Italian priest who died in 2005 are an analytical, educational description of my experience of Jesus. Christ enables me to give meaning to myself. But the method indicated by Giussani shows you a way in which this can happen. Every spirituality has an educational dimension.”

Hans reflects on the recent months lived in “virtual” contact with his new friends of CL. He thinks about the times he was in the US and the years he attended the English church. “Before welcoming me to School of Community, they didn’t check out who I was. I didn’t have to fill out any forms or provide my home address. Nobody asked me to buy anything. We also talked about politics, but after months I still don’t know what side these people are on. You can’t fit this group into any ecclesiastical stereotype. We never got mired in debates on issues related to controversies within the church. Nobody competed to be the most pious or to appear to be the best or most serious Catholic. All this is truly a great consolation for me. It is totally the exercise of freedom: a free association of free people.”