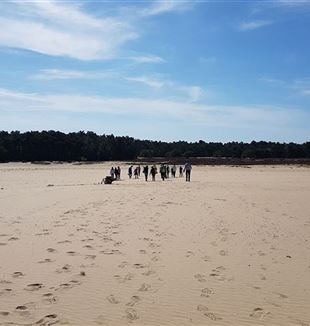 The appointment for the "older ones" is at 9.30 a.m, at the Tilburg University Chaplaincy, for Lauds. Father Michiel begins: "At the beginning of this new year, we already see, before us, a list of all the things we have to do and that we will not be able to complete. For this reason, let’s ask God not to be distracted but to be open during this day, so we can intercept all the gifts that He wants to give us today".

It is not the first time that we have organized a day with a group of teenagers, at the beginning of the new school year. The agenda is simple: visit a nice place, have lunch together and return to Tilburg in the afternoon for mass at 5 p.m. However, last year's success and the enthusiasm of those who attended, meant that the word spread and, this time, sixteen boys will join the Franken group.

The name Franken, which means "the free", is inspired by the people who settled in Holland around the sixth century, while the Roman Empire was waning, who became Catholic, taking on Roman roots.

There is a certain apprehension in the air: will there be enough adults to look after all of them? Will everything run smoothly? Shortly after the Lauds, here come the first boys. Fresh and lively faces, they come to meet us as if to ask: what have you prepared for me today? Those, who participated last year, are already at ease, while the new ones are a little more shy.

Kathrin (the secretary) makes a last check, to make sure everything is ready and in order, a quick count and we are on our way to our first destination: the De Loonse en Drunense Druinen National Park. In the middle of a forest, the park contains one of the largest desert areas in Western Europe, a legacy of the last Ice Age. The landscape is unique: a desert in the heart of Holland!

Thanks to the good weather, we start our walk through the woods towards the desert. The climate is cheerful and carefree, when Michiel interrupts with a proposal: "Let's now try to walk the last stretch of road in silence. Silence is not a punishment, but is a means to become more aware of the beauty that surrounds us in this moment. If we help ourselves in this, we will also discover that we are becoming better friends amongst ourselves". Surprisingly, Michiel's proposal is taken seriously by everyone, so we proceed in silence to our destination.

Once we have arrived in the desert, Kristina launches into the explanation of the game: a mixture of rugby and capture the flag. At the end, full of sand in our ears, starving (and a bit bruised), we head towards Cindy and Heba who, in the meantime have prepared sandwiches for everyone.

After having eaten, we return to the cars to go to our second destination: the house-museum of Peerke Donders. Fr. Donders was a Dutch missionary, born in Tilburg in the nineteenth century. He dedicated his life to helping lepers in Suriname and was beatified in 1982. "A saint is a person whose humanity is fulfilled. How can we accomplish ours and be happy?". This question remains open, among rooms full of old relics of the Blessed Dutchman.

After a brief prayer in the adjacent chapel, it is already time to return to the university chaplaincy for mass. We join the choir to prepare the songs. Stefania says to everyone: "Why sing in the choir? To acquire unity between us and to grow in friendship". The challenge is taken up. Voices more or less in tune, and souls more or less inclined to choral discipline, lend themselves to this last invitation.

After mass, the parents collect their children and the day ends with goodbyes. "Our next appointment: October 13th," exclaims Kathrin. Many already look forward to it, because life is more exciting when it becomes the possibility to verify a proposal.