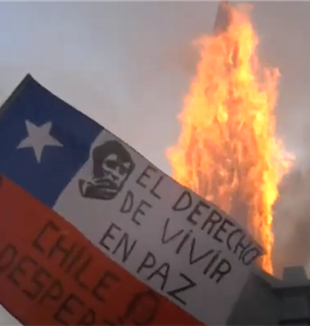 The day after the end of Encuentro Santiago 2020, whose theme was "Living Hope in the Present", we have been listening to the serious acts of violence that are happening in our country, including the burning of two churches in Santiago. These events only confirm what we said at the end of Encuentro: hope in the present only arises from seeing a more human humanity that lets in fresh air and allows us to breathe. Nothing is more contrary to the current experience of the vast majority of Chileans who are seeing the images broadcast live on television.

"Heritage is not a set of bricks or buildings, but a relationship of a living community that gives meaning to these goods. The damage that has been done, both in the churches of San Francisco de Borja and De la Asunción, is damage to the community that supports these churches, to the community that watches over its dead in these churches, that has its symbolic dimension and that begins to understand the world from these churches. This is the main damage done to this heritage," said Undersecretary Emilio de la Cerda. “Of course there is also damage to history, to memory. If we want to build a future, the understanding of the other must be at the center of this common history. Therefore, any damage to the symbols of others is a damage to the entire national community, there can be no one indifferent to this kind of destruction. This is not an attack on the hierarchy of a Church, it is not an attack on a symbol of power, it is an attack on a living community."

Monsignor Celestino Aós, Archbishop of Santiago, reminded us in his message to the community of the words that Saint John Paul II uttered in Chile over thirty years ago: "Love is stronger.” Yes, because the only thing truly capable of defeating violence, from the almost imperceptible violence that occurs in everyday life that seems to want to destroy everything it encounters on its path, is love for others. In fact, without a love, without a true affection for the other who is different from me, everything, in one way or another, ends up being calculation and violence. Even the often evoked tolerance becomes, at best, only the calm that precedes the next storm.

We ended Encuentro Santiago by announcing next year's theme: "Discovering the other: from tolerance to esteem.” It is necessary to generate spaces of encounter where one can discover the other in the originality of their "I". As was said in the debate held about what to expect from a new Constitution, these "modest but transforming gestures" are necessary, which in time will become a "culture of encounter.” What would seem so insignificant and ineffective in front of the dome of a 150-year-old church set on fire is actually the only thing that has the ability to change the world and defeat violence.

Read also - Avsi Tents: Proximity is not measured with a ruler

It was God himself who introduced into history, more than two thousand years ago, this transforming force: a new humanity with the capacity to awaken the heart, to reorient the gaze and to perceive the mystery that dwells in the other. It is the transforming force of Christ that has reached us today through concrete faces and a particular history. And it is from this particular history that we can look with hope to the future of our country, because for us it is a concrete experience that love is truly stronger.