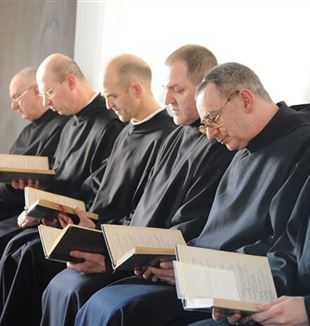 If the grain of wheat does not die
The silent passing of the days brings us this year to an important date for our monastery. June 29, the feast of Saints Peter and Paul, marks the fiftieth anniversary of its birth. This date opens us to wonder and gratitude for God's loyalty to each of us and to this place. The spark of the beginning of this monastery was ignited at the end of the 1960s by an abbot of the Sublacensis Benedictine Congregation, Fr. Bernardo Cignitti. Endorsing the words of Pope Paul VI, who called for a renewal of monastic life, he called together all those who were willing to participate in this work, and offered his life for the birth of this monastery. His was a true sacrifice; he died two months after the inauguration of the monastery, offering "his life as fertilizer for the birth of this new monastic community." 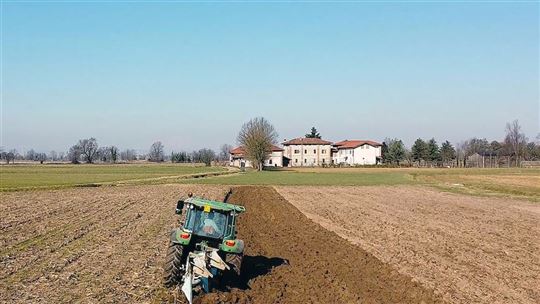 A providential event
It was on this fertile soil that the first monastic vocations from the Communion and Liberation movement found a home and quickly took root, and grew over time.
Fr. Giussani always felt close to the Benedictine history of the movement, because of the organic implications of the Christian event that it underlines. The whole human being, in fact, is permeated by the announcement that God has become one of us, that He is present here and gathers us into one Body.
We are, therefore, not in the monastery to live out the consequences of the initial encounter made in the movement, but to make explicit now, in different conditions, what happened to us at the beginning. The origin is now! Living sincerely and passionately our following Christ encountered in the movement, we cannot but be attracted by a fullness of life that comes from being with Christ and that pervades all moments and circumstances of daily life, giving new meaning to all things.
To live to say that only Christ saves, that Christ suffices, is an exaltation of the human. Monastic life is called to bear witness to this alone, to verify that everything is true now, that a new life is possible now, as a foretaste of a certainty that has already begun with Christ's Resurrection.
"Do you want to come with me?" This was the invitation with which the Lord entered our lives. This is a question that leaves no escape, it is an event not to be missed, where our whole self is seized and is led by Him by the hand, into the great Mystery of Being.
Our "yes" since then rests entirely on His initiative that guides us and, in time, teaches us to abandon ourselves to Christ and to love, as He has loved us. It is a total offering of ourselves so that He can command us as He wishes for the benefit of all. Overcome by His event, it is a matter of immersing our hearts into the Mystery with our eyes closed, with the utmost trust and simplicity, just as we are, poor and sinners, rejoicing for the usefulness that even our nothingness has when it is in the hands of God. And all this is expressed in silence, without the need for words or explanations, because it is already pregnant with an answer, already full of the gift that has only to be welcomed. Those who are called know how much His offering surpasses ours. 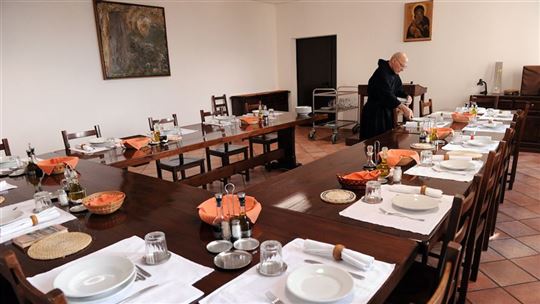 At the heart of the Church
Monastic life is, therefore, not a particular method of following Christ, but represents a paradigmatic sign in the body of Christ of that total dedication to Christ that defines every baptized person. “The Christian community," Fr. Giussani told us, "is not nostalgic for ‘this life,’ it is nostalgic for the manifestation of Christ.” (L. Giussani, Una dimora per l'uomo) [A dwelling place for man]. For this reason, in the monastery, conversion to Christ becomes a radical and all-embracing project. This means that prayer, work, and every aspect of reality express and expand the consciousness that everything becomes alive within the body of Christ. This work of taking on reality according to its true meaning requires continuous education in the community, which Saint Benedict calls a "school where one learns to serve the Lord". In fact, as we progress in faith and conversion, we associate ourselves with the suffering of the passion of Christ and our heart expands within the positive design of existence.
Here, within these four walls, where Christ has truly planted His cross in us, in this place that is His, there is indeed the possibility, through the path of obedience, to die ourselves and be reborn in true love. We must accept the death of our own measure, so that the greater measure of Another may be affirmed in us. This is a rebirth that allows us to discover ourselves as brothers and sisters beyond flesh and blood. We are, therefore, called to allow ourselves to be moulded by the Father, to conform to His will in order to express the authentic traits of the Son. The new ‘I’, in fact, germinates on the cross of Christ, embraced and accepted. It is here that new birth takes place: it is no longer I who live, but Christ lives in me (Gal 2:20).

WATCH THE VIDEO FOR THE FIFTIETH ANNIVERSARY OF THE CASCINAZZA

Building the sign of communion
On May 1, 1990, when the Archbishop of Milan Carlo Maria Martini – with the consent of the Holy See – elevated our monastery to the status of a priory sui iuris, the community assumed its definitive juridical personality. This fact, rather than being a point of arrival, has been the occasion for each of us to put our freedom at stake in the face of our vocation. Each of us has been called to be responsible for the increase or extinction of the charism received as a gift. The purpose for which this Monastery was born, the meaning of renewal, and therefore the responsibility of each of us, can be found in the words of the person who began this monastic experience, Abbot Bernardo Cignitti, when he said: "Let us think of a Benedictine monastic family, where the community is evident and in the foreground as a 'sign of Christ', where all the brothers are at the service of charity, where fraternal communion is a reality that is lived, suffered and made new every day."
What is proposed is communion as an event of Christ, already present among us. Of course, this is not the result of our own ability, what we are is not the outcome of what we construct, but it is the recognition of Someone who happened to us and brought us together. Faith in Him is what continually rebuilds us through His faithfulness and mercy. It is therefore a matter of remaining within this original method of an Other who makes us and generates us, in order to relive today the same experience of the beginning. This is why we look at the charism of the movement of CL, to live the charism of Saint Benedict more powerfully today. This happens depending on the extent to which we are willing to immerse our whole face in Christ’s, within what is said to us, within the circumstances through which He asks us to love Him today. Living the present as God's plan means not knowing what tomorrow will bring, but knowing that tomorrow will come out of obedience to today. It is in this personal work of being loyal to the sign of our vocation that we can discover an unimaginable familiarity with the Mystery, a friendship and unity between us, which is humanly impossible.
What each of us was looking for is a present Fact that found us and gathered us in this place, to be His visible Body in the world.
For 50 years, every morning when we wake up, this companionship, by its mere presence, brings us the announcement of the present Destiny ready to give itself to us in spite of all our mistakes. Fr. Giussani once told me: "If you do not forgive, you will not raise anything.” Then I understood that our belonging to Christ is given by the self-sacrifice that gives birth to the other. It is within that forgiveness that the barriers between us fall. The miracle of an affection is born that is capable of embracing the other and of building a home that reaches the ends of the earth, eradicating all unfamiliarity.