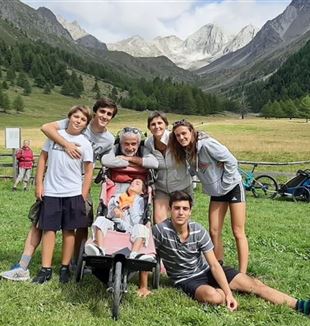 There was a moment near the beginning of their life together when it seemed that things were going to go another way. Instead, it was at that moment, while standing on the sidewalk in front of the Obstetric Gynecological Hospital Sant’Anna in Turin, that Paola and Alberto Mina decided to let their story grow and to embrace what was to come. “They had just told us that it would be unlikely that we would be able to have children, and were already talking about in vitro fertilization,” said Alberto, recalling that afternoon in 1995. Alberto and Paola had been married two years at the time. “I remember we were on the sidewalk and I said to Paola, ‘Look, we do not need to have children in order to be happy, but we do need God. Let’s entrust our lives to Him. If God wants to give us children, He will make it happen.’” A few months later, they met with Fr. Giussani and talked to him about their situation. He broadened their horizon even more. He said, “Don’t worry, this happens to many couples and then later they have children. Why not go on a mission? I know that in Argentina there is a need... in any case, what is important in life is not catching that ‘flight’; rather, it is to love God. Therefore, ask to love God in the way that He calls you.” In the end, they did not end up going to Argentina, but Giussani’s words became the thread running through their daily lives, through their relationship, and through relationships with friends and work. It is what sustained them even when their children were born. Francesco was born in 1997 and Guglielmo in 1999. “When Francesco was born, I remember thinking, ‘I will never complain about my son,’ because that's how strong the sense was that he was a gift for me. He was so small, but I understood that he was a mystery that I would always continue to discover,” recalled Paola. 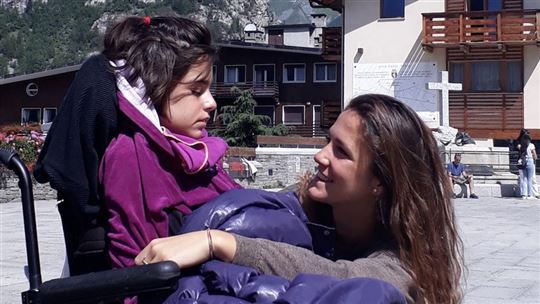 In 2000, Grazia Maria was born, and that same mystery overwhelmed them. When Grazia Maria was around three months old, they realized that something was wrong. She slept all the time and was hypotonic. After consulting multiple doctors, Grazia Maria was finally diagnosed with congenital encephalopathy. Grazia Maria would never be able to walk or speak and would be totally dependent on others. “We looked for the best treatments and even considered going abroad, but very soon we became aware of the risk of getting caught up in wanting to find a solution,” said Alberto. Grazia Maria’s condition remained stable and did not get worse. Paola and Alberto were open to trying anything that would help her, but they also realized that they could not focus all of their energy solely on her. They needed to take care of each other, and most importantly, of their other children.

It is reality in all its detail that dictates the steps they take as a family, and they find their peace by embracing what happens. This is the approach they took in 2002 when Cecilia was born. Both Cecilia and Grazia Maria had to be fed, washed, changed, and pushed in the stroller at the same time. In spite of the great effort spent in caring for their children, Grazia Maria’s presence was the factor that catalyzed the growth of all the members of the family. “She was our permanent pass to get directly to what is essential. When there was a problem, when we were sad, all we had to do was look at Grazia Maria, who was so patient and innocent, in order to keep going,” said Alberto. Around that time, Alberto came up with a phrase that he recited often as a prayer: “Grazia Maria, the Mystery in my house.” The children took it literally. Francesco always had a special bond with Grazia Maria, and when he could not sleep at night and felt scared, he used to go to her and cuddle with her in her bed. He recounted, “In her extreme fragility, Grazia Maria was my greatest comfort; she was my rock. Even when I got older, seeing her openness and happily surrendering to others always turned my hostility on its head.”

Guglielmo remembers that when he and his siblings played together when they were little, they tried to include their sister. The reason for this, Guglielmo said, “is that I perceived her quiet presence as something precious. I did not understand how, but I looked at her in the same way our parents did. My father would kneel down before her every night before bedtime. I perceived that this gesture is what allowed our family to be beautiful. My mother, through countless acts every day that were often humiliating, was the engine of Grazia Maria’s life. Because of this, it was natural for me to greet her affectionately in the morning with a caress or a kiss. I may have been rough with others, but I couldn’t be that way toward her.”

In 2007, the Mina family moved to Milan. Their new home was on a farm on the outskirts of the city. Grazia Maria entered elementary school. At this time, Paola discovered that she was pregnant once again, and in the following year, Carlo was born. Their life in Milan was similar to that of other families. They went to school, played sports, went on vacations, and had dinner with friends. Getting around with Grazia Maria was often complicated, but every challenge was also very rewarding. “For us, she has always been our banner. When we took her with us, it was easy to engage with people, because everyone responded to her presence. No one ignored her. She would dissolve that protective barrier that makes you feel like nothing can touch you. Her presence would draw your attention and you became a protagonist of unexpected conversations and encounters.”

This is exactly what Cecilia, the Mina family’s second daughter, sought to experience with Grazia Maria, but she tried to escape from it at the same time. “It has always been difficult for me to stay with her. I would try to avoid her and I was afraid to invite my classmates to come to my house. I didn’t feel adequate. I measured myself constantly. Her innocent suffering was too much for me to bear.” However, when Cecilia went shopping, she would always buy something for Grazia Maria. After taking a shower, she would paint Grazia Maria’s nails and apply a face mask on her. “Even though I kept my distance, my relationship with my sister molded me, because when I reflected on the contradiction that de ned her life, it always made me ask many questions, said Cecilia. “She never judged me. Every time I returned, she welcomed me and would light up, which was her way of communicating that she was happy to see me.”

During the latter part of her life, Grazia Maria’s condition worsened. She had convulsions on almost a daily basis. During her episodes, her mother and Francesco would hold her. “It was natural for me to respond in this way,” explained Francesco, who earned his degree in physical therapy one year ago. “It is my job, but often I would close myself off because of the pain, so I would lose sight of the myriad questions that seeing her suffer provoked in me. It was by looking at my siblings, who would help from a distance and who were sometimes scared, that I was able to reaffirm the truth about Grazia Maria. In their hearts, the question about the meaning of what we were living burned brightly.”

Last July, in honor of Grazia Maria’s twentieth birthday, Alberto wrote a letter. “For the past twenty years, you have been the Grace in our family. Your beauty always amazes us. This is in no way contradicted by your disability. Your gaze, above all, never fails to provoke. It is as if you always say ‘ fiat,’ let your will be done.” That was her last birthday. On the night of March 14th , Grazia Maria passed away. She had been constantly suffering from seizures for a few days. “That night, I told my siblings ‘This is a relief for us, for mom, and for her,’” said Carlo, who is now twelve years old. “Staying with my sister was hard for me. I would get easily annoyed because it could take her five minutes to answer me. But now I regret treating her the way I did and I feel as if I lost something important. Without saying a word, without being able to do anything, she was loved by us and that was enough for her.”

At the end of the rosary in which four hundred friends from all over the world participated virtually, Javier Prades, a Spanish priest, said, “Grazia Maria gave herself completely to you, the way only someone who is needy can, and you gave yourself completely to her, giving life to a unity that also includes those who meet you. Up until now, you have had an incredible life, but as the Gospel of St. John says, ‘We will see greater things than this; the best is yet to come.’”

Read also - Brazil: among the stars and lasagna

Guglielmo witnessed the first manifestations of this as friends flooded their home in the following weeks. There were many who entered in order to console the Mina family and left feeling consoled. All of them were touched, even for a moment, by the gratuitousness that can emerge only from the tough times that this family has experienced. “I am struck by the fact that our unity awakened in many people a desire for a more radical commitment to their studies, their girlfriends, and their own wounds,” said Guglielmo. “It is something that has always been part of us. When we were little, dad was rarely home, but we did not perceive that he was absent, because our dad was there in our mom. They were so closely bound that even if one of them was not there, it is as if he was still present.” This unity was constantly nourished by what Paola and Alberto said to each other on the sidewalk in Turin twenty-six years earlier. “I am always out and about doing a million things,” said Guglielmo, “but once in a while I need to come home, to return to where everything began.”#Family