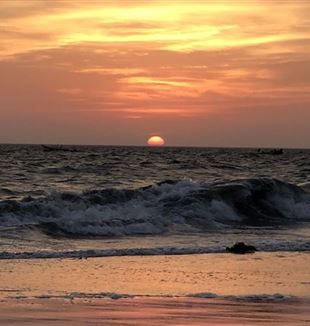 We met in 2010 in Foz de Iguaçu during a CL vacation. It was the first time the Latin American CL communities were meeting. I am Italian, but I was attending because I was working in Argentina at the time, and Débora had come with the São Paulo community.

Last May 2, we celebrated our seventh wedding anniversary. In recent days, we have spent time at the beach with some friends. One of them suggested that we listen to Beethoven's Ninth Symphony at the top of a promontory overlooking the sea at sunset. To get there we had to climb over some rocks, some slippery or covered with sharp shells, and this was a little scary as Débora is pregnant. However, when we got to the top, we sat on a large rock and, amidst the sound of the waves breaking on the cliff, we listened in silence to the symphony while contemplating the horizon.

When a friend pointed out to me the spot where the sky was beginning to redden, I was fascinated by the flight of the seagulls flying so high. Then I wondered: what for me, in my life, is like the air upon which these birds rest their wings to fly so confidently? When the music ended, a friend opened his backpack and pulled out, as a surprise, a bottle of champagne, congratulating us on our seven years of marriage. Débora, moved and with a faint voice said, "How nice it is to be accompanied."

It is truly a companionship that helps us to perceive, without fear, how small, fragile and needy we are, and how our infinite desire is the path to intercept the certainty of being loved in every moment. For us, vocation is to help each other to be ready to let this beauty in, which can surprise us at any moment.

When we fell in love, or in moments of doubt, Débora would always repeat as a promise, "We are made to love the stars!" As is the case for many, our work and salaries have been affected by the pandemic. Débora's work in the art industry dropped dramatically, and the restaurant where I worked had to let me go because it decided to downsize. At the same time, our two daughters had to stay home because the schools had suspended classes. After years in which my profession required me to often be away from home, especially on weekends, our family was now gathered day and night in the same space. It was a new life to discover. After some prompting within the family, and realizing that the period required a new protagonist to sustain us, we decided to make and sell artisanal lasagna. I love to cook!

I remember that night when I sat down and wrote "Filippo's Lasagna" on a piece of paper, drawing arrows around it to identify short-term actions and start the business. The next day, I asked Martina, our five-year-old, to draw something that represented "Filippo's Lasagna." Without a second thought she said, "No! Dad's lasagna!" I asked her why she said that. And, even more convinced, she replied, "So everyone knows you are not alone!” Those words were a treasure and gave the lasagna its name. To this day, they have remained, above all, a mysterious working hypothesis because they have helped us to discover once again that we are not alone and that life is ultimately a relationship that does not depend on us. That life is a gift.

Thus, this small domestic initiative turned into a great adventure of gratitude for the initial gesture of an Other who accompanies us through our many friends. Seeing how happy our daughters were to be at home with their parents, Débora began to understand that the home could be a place to live in a new way, to accompany school, domestic and professional work. She felt provoked by hearing Carrón say, "I am not staying at home not to die, but to live, to live intensely."

And so, with some friends, we began to meet weekly via whatsapp to share our week and to tell each other about our experiences at home. The initiative "The sky at home" was born, comprising of texts and drawings developed by them starting from the positive surprises offered by life at home. As happened to a friend who, during a period when she was struggling in her job, began to meet more often with some friends, realizing that she needed something bigger and other than herself to stand up to circumstances.

For several years, we have wondered whether work was a function of family or if family was a function of work, and today we see that work and family are a function of life, which is an unpredictable friend. Early in the pandemic, a friend invited us to attend one of the first online School of Communities one evening, asking how we were doing. For various reasons, we had hardly participated in School of Community in recent years, but that unexpected, gratuitous invitation attracted us. We discovered that School of Community is a place that allows us not to miss the things we are living, and we began to attend every week. Over time, we began to realize that this was the place where not only did we not miss the things that were happening, but we gained a hundredfold, because something was happening there that could not be missed. Someone happens who is not afraid of anything and who embraces people's lives. And this is evident in the discoveries each person makes as they see their humanity transformed by that embrace.

School of Community has become a stable companionship, a sign of the Mystery's preference for our lives, helping us to be more protagonists and to live better what happens to us. We never made plans to have children, and they came. Débora got pregnant with our first, Martina, as soon as we got married, so we did not have much time "just for us". Then, much desired, came Rebecca, and now there is another gift in her womb. From the beginning, our children have been a special presence and revolution. As the song by Milton Nascimento says: "All life exists to illuminate the path / of other lives [...] Go, open / the doors of the ship". There is Someone waiting for you at the dock.#Family