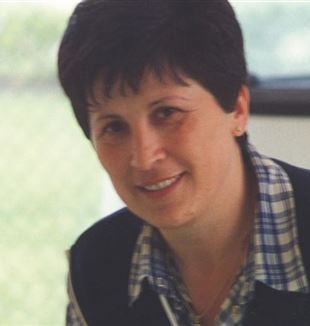 "The experience of hospitality can only arise from the possibility of experiencing a gratuitousness upon oneself. Never from an effort, never from generosity or violence, from having to make a commitment to be a good Christian. No! It is always mercy, it is always forgiveness, an embrace, a warmth perceived in oneself that generates a welcome". Novella's voice resounded loud and clear in the Cathedral of San Cassiano in Imola. Her face appeared on the various screens installed in the church, so as to allow the many people who gathered on Saturday, May 8, respecting social distancing, as well as the many connected online, to see and hear this unedited testimony from 1989. It was a conference of Families for Hospitality in Bologna.

It was Novella Scardovi who spoke with such decisiveness: a housewife from Romagna, wife and mother, but above all a woman so invested in her encounter with Christ, which took place through the movement of Communion and Liberation, that she "infected" those she met with her inexhaustible thirst for fullness and her great desire to embrace. It was a desire for which she immediately opened the doors of her small apartment, transforming her family and opening it to the needs of many. A desire that in 1996, a few years after that testimony, would assume a new shape with the birth of the Casa d'Accoglienza [House of Hospitality] San Giuseppe and Santa Rita in Castel Bolognese, opened with her husband Giuliano, her children and many friends, "to be able to welcome anyone who knocks on our door". 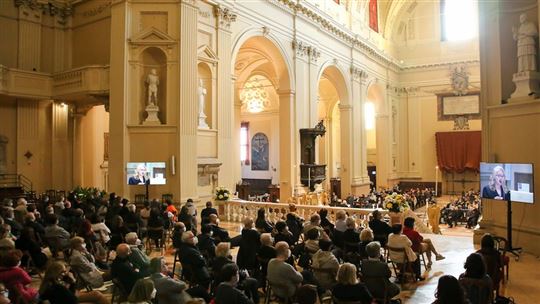 Novella's desire was powerful, but it was totally entrusted to Another, so much so that she said: "If Jesus called me to leave and entrust everything, I would be ready to do it now". Novella died tragically on May 8, 1996 in a car accident, just two months after the inauguration of the Casa d'Accoglienza. And yet, despite the pain, that desire did not stop and continues today, visible in the work that bears her name, Casa Novella, inspired by her charism and established with various facilities in Castel Bolognese, Faenza and Lugo to welcome minors with family problems, people with disabilities, and women with pregnancy complications.

Novella's words, as we were saying, resounded in the Cathedral of Imola on Saturday, May 8, on the 25th anniversary of her death. They resonated during the event promoted by the Novella Scardovi Foundation, Communion and Liberation, the Diocese of Imola, the Friends of Novella Association, Families for Hospitality, "not to remember the death of a person, but to look at life, to be able to encounter again the certainty that sustained Novella and for which she gave her life", as Fabio Catani, president of the Foundation, said in his introduction.

Images recalling the construction of the Casa d'Accoglienza flashed across the screen, accompanied by the songs of Claudio Chieffo, a great friend of Novella, to whom he dedicated La canzone di maggio [The song of may], written in the wake of her death. "But my love, my love doesn't end...," underlined Chieffo's son, Benedetto. It is precisely "a love that does not end" that is recounted by the many faces that, in the interviews of the video shown, testified to how their lives changed in encountering Novella. Her daughter Chiara spoke of her parents "who looked at each other and wanted to bring out the best in each other". Then there was Eugenio, the friend through whom Novella’s discovery of faith was born, who during that summer at the end of the seventies invited her to that campsite in the Tuscan-Emilian Apennines to say Lauds together, and she, who was so lost, sad and alone during a difficult period of her life, said her first big yes. Then there was her great friend Adele, who over the years was entrusted the role as head of the Casa d'Accoglienza and oversaw the work of Casa Novella. She recalled how "we were beginning to work with foster children, but she was clear that she was the first to have put herself into the care of someone else, to have have entrusted herself". Then there was the mayor of that time, who was so moved in remembering "that love towards the last ones", and her friend Luca, in whose life there is a clear dividing line: “his marriage before and after his encounter with Novella". Then there were many others including some of the women cared for, employees of the institution, even Giorgio Vittadini who recounted how, as president of the Compagnia delle Opere, he oversaw the beginning of the work of Casa Novella that today "represents a prophecy of the ‘I’ that becomes a ‘we’, generating a change both in the people welcomed and in those who look at you".

Read also - Macerata-Loreto: "Our journey handed over to the Pope"

"In Novella, the presence of Jesus prevailed, it fascinated, it touched your heart through the gaze of a free woman in love, through her concrete and tender gestures, her humanity entrusted to Another, her simple offering," concluded the Bishop of Imola, Monsignor Giovanni Mosciatti, in his homily at the anniversary Mass. "Touching the need around us makes us discover our powerlessness. Novella understood that we move to share a stretch of the road with those in need, not thinking of solving their problems. Because the real human problem is to have an encounter, to find meaning in life". Novella embraced this so much that she could not keep it just for herself.