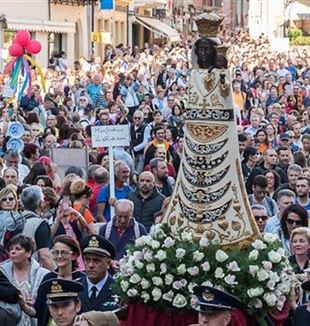 Last Friday, Pope Francis received us in private audience in the Apostolic Palace, led by Monsignor Giancarlo Vecerrica, Bishop Emeritus of the diocese of Fabriano-Matelica and originator of the Macerata-Loreto walking pilgrimage. The occasion of the meeting was to offer him the book published by Libreria Editrice Vaticana, Gli "squilli" di Francesco, a collection of texts of his now famous live telephone calls at the beginning of the pilgrimage since the first year of his pontificate.

In the days before, as soon as I heard the news that the Pope would welcome us, I found myself awaiting this moment with trepidation and ever greater awareness. I asked myself: what are we going to say to the Pope? It was immediately evident that encouragement was not enough. I felt the urgency to "hand over" this gesture to Him, which I became involved in almost by chance and which over the years has become dear to me. I went there a beggar, having before my eyes what Fr. Giussani said in front of John Paul II: "The true protagonist of history is the beggar: Christ who begs for man’s heart, and man’s heart that begs for Christ”. After all, I undertake the pilgrimage just for this, to discover myself a beggar.

"Worse than this crisis is the tragedy of squandering it." Challenged by Pope Francis' provocation, which Fr. Carrón relaunched at the Fraternity Exercises, we asked the Pope for help in looking at the pilgrimage in the context we are living. Indeed, the health emergency is a radical challenge even for a pilgrimage "on foot," which clearly cannot be carried out in the usual way! Yet it is precisely this circumstance that makes us discover ourselves even more in need, making the question about the meaning of living and dying more acute. For this reason, as we did last year, we thought about proposing a gesture at Loreto, with the recitation of some of the mysteries of the Rosary, which will be broadcast live on TV2000 on Saturday 12 June at 9 pm and which everyone will be able to follow with creativity together with friends, in compliance with the regulations.

"When I see you, I see hope." We told Pope Francis that the theme of the upcoming pilgrimage describes a very human experience, the very one we easily surprise within us: when we see Him, when we are seized by the gestures He performs, hope is born.

The Pope repeated to us that one does not come out from a crisis the way one was before, but that one only comes out better or worse, and that every time he hears the refrain “return to normality” he hears loud screeching. The pandemic is a challenge to humanity and hope is not in returning to the usual "normality". Normality will be what comes next; in a way it is as if we will have to discover it and build it ourselves. He told us that for those who perceive the pleasure of walking this is easier to understand, because each step is never the same as the next, it is always new.

During the dialogue, my memory went back to those unforgettable images of the gesture he proposed in March 2020, in a deserted St. Peter's Square. Looking back at that moment, it became clearer to me that (in pilgrimage, as in life) the problem is not success, but for me to be true. I am beginning to perceive the scope of the challenge that Carrón launched at the Exercises and what it means to "not squander" this crisis: to live every circumstance with the desire to re-discover Christ’s victory.