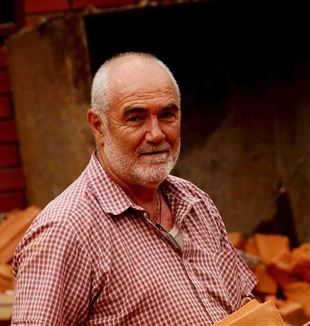 The story is told by the red dust that covers the old Toyota Land Cruiser, which has been left parked under the carport of St. Mary’s Hospital Lacor in Gulu, a city in northern Uganda inhabited by the Acholi. Countless miles were driven on the dusty roads in the savanna. This SUV has been used as an ambulance to carry those suffering from Ebola and those wounded in battle and in internal feuds; it has been used as a school bus to transport orphans of the St. Jude Children’s Home; it has also served as a hearse when families did not have the means to bring their deceased loved one home, as well as a taxi for women carrying heavy loads on their backs. The story is told by the lumbar pillow left on the car seat, the black cap forgotten on the other seat, the rosary hung on the rear-view mirror–because every trip began with a prayer.

The pillow, cap, and rosary all belonged to Br. Elio Croce, a Combonian friar, an incredible man of God and a child at heart who welcomed everyone and could do anything. He drove an old SUV instead of an Aston Martin, but if you look at pictures of him, you will agree that he resembles Sean Connery. 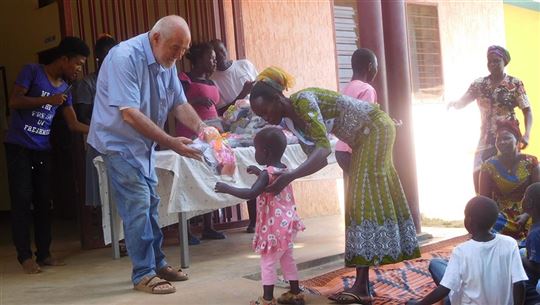 He was a Good Samaritan and builder of cathedrals. As a Good Samaritan, Br. Elio was always ready to help anyone he met who was desperate, orphaned, wounded, mutilated, disabled, or sick. Not once did he hold back from an opportunity to assist someone, not even when he was asked to bury those killed in battle by merciless soldiers and left to rot in the streets, putting his own life on the line. As a builder, he helped build hospital wings, warehouses, schools, orphanages, irrigation systems, an oil mill, and most recently, a beautiful church. In the process, he provided jobs and taught people how to work. For him, no initiative or action was his own; they belonged to Providence. The standard by which he measured everything was very simple: if the work is blessed by Providence, then it will prosper. If not, it will fail.

Br. Elio, who survived massacres and the Ebola outbreak, left for his heavenly abode on November 11, 2020. He died of COVID at 74 years of age, fifty of which he had spent in Uganda.

Br. Elio was born in the mountains (Moena, Italy) and had the soul of a mountaineer (a man of few words, with a gruff demeanor but also a kind heart). Stories of missionaries were the spark for his vocation. He got a degree in surveying and he studied English in England in preparation for becoming a missionary. His first assignment was in 1971 in Kitgum, a run-down suburb in Acholi territory, as a hospital administrator. In the late 70s, volunteers who were members of CL began to come, especially doctors from Varese, who sparked the movement in Uganda. In 1986, Br. Elio was sent to Gulu, a bigger city with 150,000 inhabitants about sixty miles from Kitgum. Here, he became the administrator at St. Mary’s Hospital Lacor, which was established by Piero and Lucille Corti. Thanks to his efforts, it became the most important and advanced hospital in northern Uganda.

The significant moments in his life were marked by a yes to the provocations of reality, to the circumstances that arose. Around the time that he arrived in Gulu, the civil war erupted. One day, he received news that rebels had killed many people at a refugee camp and had kidnapped women and children to use as sex slaves and soldiers. He departed for the camp, and on the way he passed a vast clearing where he found something horrific. There he saw the massacred bodies of sixty women and their children, who had been beaten up. Sixteen of the women were still alive. He transported them to the hospital and eight survived. This world-class hospital became a sanctuary for those who had been displaced, or who had escaped from being captured or raped. Toward evening, thousands of children arrived, traveling as far as six miles to seek refuge for the night in this safer place. They left the next morning and they became referred to as “night commuters.” “The most we ever hosted in one night was 32,000,” recalled Br. Elio in an interview. “They formed a human carpet that covered every space, porch, portico, lawn, and awning.” And every evening he invited everyone to pray the Rosary: no matter what religion or ethnic group, together they pray to Our Lady for peace.

Another provocation from reality happened when he met Bernadette, an Acholi widow, who in 1982, began taking care of orphans. This work garnered her considerable respect. Bernadette asked Br. Elio to help her build shelters where the children could live. Br. Elio accepted and built an orphanage called the St. Jude Children’s Home–because a home is where a family lives.

Bernadette passed away in 1992, and Br. Elio was given the huge task–which he did not want, but to which, as was his wont, he said yes–of running the orphanage. Today, St. Jude Children’s Home hosts ninety children, about twenty to thirty of whom have special needs. They live in small houses and residences constructed by Br. Elio, on average eight in each, with a caregiver who is not their biological mother, but is a mother in every other sense. Later a school was established for the children in the Home, as well as the children from nearby villages. In the elementary school alone, there are 450 children. There is also a farm that boasts acres of rich soil for growing food, which does not generate much profit, but contributes to meeting the costs of the Home and provides jobs and professional training.

To retell the legend of charity that was Br. Elio’s life, an encyclopedia would not suffice. We will let those who knew him tell his story.

Josephine Ogweda, the co-director of the St. Jude’s Children Home, said, “We grew up looking up to this man who was always on the go, who never tired, and whose heart was always eager to welcome everyone he met. He was fatherly to all.”

Anna Rita Corciulo, the program manager of the orphanage, said, “Everyone will tell you that Br. Elio was a witness of God’s love. Those who met him would all ask themselves, ‘What makes him this way? How can he be so hopeful and so charitable toward others?’”

Alfred is a 35-year-old engineer who manages a hardware store in Gulu. He said, “My father was killed when I was five years old. One day, some people told me about a Combonian friar who helped orphans, as long as they were good students. I decided I would go meet him. I was fourteen years old at the time. On Monday, December 13, 1999, I was standing outside of his house and there were many people there who wanted to speak with him. He listened to everyone and gave each person either advice or some form of assistance. I can still remember what he said to me–he said, ‘Your life is like an egg resting in your hands. You are the one who has to take care of it. There is no reward for laziness.’”

Martin Oyat, a former resident at St. Jude’s, is now the manager of the warehouse and milling department for the farm. He said, “There were times when we disagreed and almost got into arguments. Br. Elio never held a grudge; he was always ready to embrace me. He has taught me to be who I am today. I have become a catechist, and, in the midst of the pandemic, I decided to get married.” Another friend, Patrick, suffers from severe rheumatoid arthritis that has con ned him to a bed for years. Patrick said, “Br. Elio used to help me purchase medication and bandages to treat the pain, and he would also help me buy groceries. In exchange, he asked me to offer up my suffering for the conversion to Christianity of the entire world. Since he knew I have a devotion to St. Pio of Pietrelcina, he bought me a television so I could watch and participate in prayers. He taught me to forgive and to love.”

Vito Schimera, a surgeon at Lacor Hospital and a father of two children born in Kitgum, said, “Elio exemplied what it means to be ‘like a child’ as it is described in the Gospel. Everything filled him with awe. His childlike spirit is what made him such a great builder. He was fascinated by Fr. Carrón’s book The Radiance in Your Eyes and wanted to get copies of it so that he could hand them out.”

Samuele “Sasa” Rizzo, who was born in 1978 in Kitgum, is married to a Ugandan woman; they have two children who were born in Gulu. “I was privileged to have a friendship with Br. Elio over the course of ten years. I would go and have coffee with him on Sundays after Mass; I watched the way he acted around children when we went to do charitable work at the orphanage. When I began, everything was new to me, and he served as a mentor and helped me with both my personal and professional vocation. Through him, I saw a charity in action–an inexplicable love made possible because of his love for Christ–that I wanted to imitate.”

Read also - Giussani and I. Confessions of a headteacher

Then the pandemic hit. Br. Elio did not get infected with COVID in the spring. In the fall, Seve (Matteo Severgnini, the principal of the Luigi Giussani High School in Kampala), received a text from him that read, “I went to get tested for COVID. I tested positive. Thanks be to God,” and thought to himself, What do you mean, thanks be to God? Seve understood later after he overcame the shock: “Elio’s strength was not his ability to build, but his willingness to obey.”

In November, Br. Elio was in his final days. His last two messages were, “I abandon myself to God’s holy will,” and “Totus tuus.” In this way, everything was fulfilled; everything became clear. An Acholi man expressed it well at the funeral Mass when he said, “If someone were to ask me how to follow Jesus today, the answer for me is simple. By following a man like Elio.”