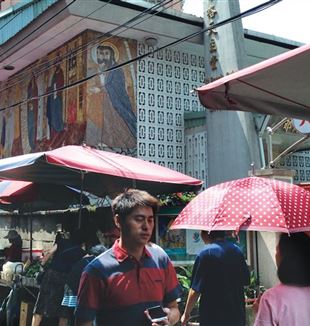 She is now in a wheelchair and every day she must go to physical therapy in a rehabilitation center. “But I am happy.” She has been diagnosed with terminal brain cancer. We have already heard about her story during the Beginning Day, when Fr. Julián Carrón read one of her letters and asked himself, “What experience must our gravely ill friend Xiao Ping have had to make her become ‘the beating heart of the community’ of Taipei”?

She was a career woman who at fifty years old had to stop working because her illness worsened. “But when you see how she lives, it is impossible not to be moved,” explains Fr. Donato Contuzzi, a missionary of the Fraternity of St. Charles Borromeo and pastor of St. Paul Catholic Church in the capital. “Looking at her, listening to her... introduces a new gaze on life.” He speaks for himself and for the other priests who share his mission, working at Fu Jen Catholic University and in two parishes (St. Paul and St. Fran- cis Xavier, in the Taishan district in New Taipei). Fr. Donato also described the small CL community of about fifty people, some of whom are not Catholic, that has grown up during the twenty years that the Fraternity has been present on the island of Taiwan. 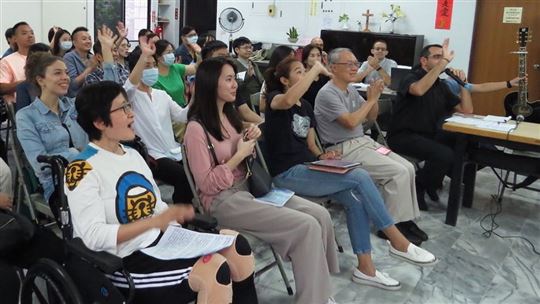 Xiao Ping first encountered Christianity five years ago through a colleague. She found the movement right around the time that she discovered she was sick. After doctor’s visits and exams, she received the diagnosis. “There is nothing to do,” except to live. She told her story in a letter [see the October 2020 issue of Traces] and then she gave a witness online at an assembly of the Asian communities with Carrón last November. She talked about her father, who spent fifteen years bedridden in a nursing home, and about a group of people that regularly went to visit the residents there. “They were from a parish near the nursing home. I felt very grateful that they were coming to visit, even though I did not know them. Thanks to them, my father was not alone and forlorn in the dark times of his illness.” At the time, she thought to herself, “In the future, when I have the chance, I also want to volunteer.” Then she discovered the Movement and a new concept– charitable work. “I started to visit the elderly in a nursing home, just as others had visited my father.” It is a “school,” as she put it, where you learn to love and to be loved.

But what about now that she can no longer participate in the charitable work due to her illness? “She is happy,” confirmed Fr. Donato, while in the background, the bells of the nearby Buddhist monastery ring for the evening prayer at the end of the day. “Here, Christians are a minority. People have a strong religiosity, even though it is expressed in rituals and customs aiming to fulfil their personal wishes.” This fits with a culture and society in which the only thing that matters is one’s success and performance. “In work, academics, and relationships... you matter if you achieve, if you make it.”

However, this is not how life works. We are reminded of the words of Xiao Ping from her witness of her experience of going to treatment every day. “Around me there are many other people who are sick, young and old. Some of them who try to engage me in conversation ask me about my stroke and they show me some exercises to do. I must explain that I have cancer, that I did not have a stroke. They reply, ‘That means that you can get surgery and then heal.’ I find myself repeating often that there is nothing more that can be done...”

It is hard to have to explain, and because of this, Xiao Ping began to isolate herself. Still, she could not forget her father’s experience and that “when I used to go to charitable work I was good at keeping people company, especially the elderly.” One day, a woman who had always kept to herself approached Xiao Ping. “I was praying. I thought that she might want to say good-bye to me before leaving. Instead, she stopped in front of me and stared at me. I saw her use all of her strength to say three words. She said, ‘I love you.’ I was stunned and I did not know what to say. Automatically, I said ‘thank you, grandmother’ in dialect. I thought to myself that ‘God spoke to me through this woman.’” Xiao Ping saw her again four days later. “This time, I immediately told her that I loved her too. She was overjoyed. Since then, she always greets me, cups my face in her hands, and says ‘come on, we are in this together.’” The days of going to treatment became her “daily charitable work.”

“For me, for us who consider her a friend,” continued Fr. Donato, “we see the victory of Christ when we look at her. Not sparing us anything, this forces us to confront the meaning of life and death. You can’t help but think about what makes her this way and about the hope that she has and that she brings.” She does not try to act tough. Fr. Donato said, “She tells you about all her struggles and her fear and suffering. ‘Why does God not take me now?’ But this is not disappointing. In fact, it is comforting, because it demonstrates that what she is living does not come from her. Something else is the origin. She is a sign of something I also want to experience and I am not the only one to say that.” 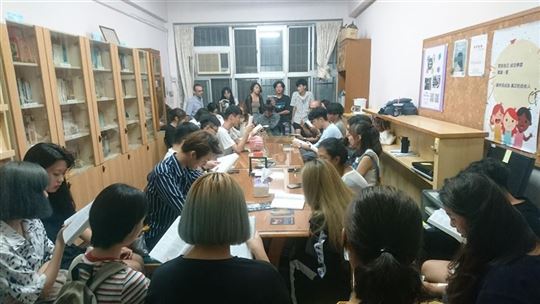 Fr. Donato looked back on the fruits of grace he has seen lately: “what God is creating among us.” Among the group of university students that do School of Community in the parish, there are many who are not Catholic but are attracted by a proposal to live life differently.

Recently at the university, three students committed suicide in the course of one week. “This is not a surprise, given the high rate of suicide in this country.” Psychology is used to answer this problem, “but this is not enough. No one tries to get to the bottom of it, to try to explain why these people do not have hope.” One young woman, who had distanced herself from her friends in the movement after her graduation, returned not long ago. “She told us that one day she was walking on a bridge with a cup of coffee in her hands. She wanted to jump, but then she realized that she would never taste the wonderful flavor of coffee ever again. This may seem insignificant, but who introduces us to this way of looking at reality? When she came back, she said, ‘Thanks to you I have understood why it is worth living and that I am loved.’”

No culture or ritual is enough. Only the heart, the place of our need to feel loved and wanted, can be moved in this way. When it happens, one can feel hopeful again. “The mother of one of our friends, who is elderly and comes from mainland China, and does not profess any religion, joined us on a short vacation in September. At the end of the vacation, she was touched and said, ‘I have had a hard life. I took care of my husband who had cancer for thirty-one years while raising my daughter. Yet I never felt alone, as if someone were constantly sustaining me. I always thanked the ‘God of the heavens,’ just like the emperor, who they say prayed to this god in the temple. Now I know that it was Jesus who never abandoned me.’”

This happens through Another who can be perceived and recognized, “to whom you can entrust the people you love, like Xiao Ping did recently one evening for a group of long-time friends.” At the end of the evening, Fr. Donato said, “These five or six people saw that she had changed, so they wanted to meet ‘those priests.’ All of them came with Xiao Ping for dinner. We spent the evening together and she was happy. After dinner she said, ‘My friends are your friends too.’”