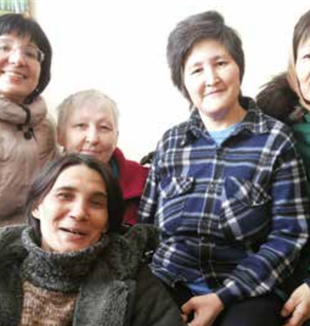 In Russian, charitable work is “charitable work.” In fact, no adequate term has been found to translate an experience of the kind. However, in Karaganda, in the heart of Kazakhstan, there is a word that illuminates and almost substitutes this foreign expression. It is the name of a woman: Gianna. Here, charitable work began for her. For the last seven years, every week, a group of friends has gone to the psychiatric institute of the city where she had been committed, to visit her and bring her clothes, food, books and music. It is a place of squalor that evokes the memories of the Soviet gulags, of which this Kazakh land still bears the scars.

“Some of us met Gianna at the end of the 1990s in the university. She suffered from epilepsy and a light form of schizophrenia,” recounts Liubov. “But she was able to live an almost normal life.” Her sister was the one to forcibly institutionalize her after the death of their parents. All of a sudden, her friends did not know where she was. Fr. Edoardo and Fr. Adelio, her Italian teachers, finally found her, after a month of searching. “She was bound, sedated, with her head shaved,” recounts Fr. Edo. “She had tried to escape and to commit suicide. In the midst of that horror we repeated what we told her when she converted and asked to be baptized: “We will never abandon you.” Charitable work grew out of that promise, that bond, to which the friends of Karaganda decided to dedicate themselves in a stable way.

They organized themselves into groups, and on Saturday mornings, with simplicity, did what Gianna needed, challenging her lethargy and insecurity. Visit after visit, relatives, students and colleagues came together, and something began to revive in Gianna. “She opened up, looked forward to our coming, wanted to know what had happened since our last visit, worried if someone didn’t show up for too long. The situation seemed to invert, and it turned out that we were the ones who were the objects of her tenderness,” explains Liubov. The nurses took a liking to her and the charitable work friends found her helping to distribute medication in the wards. She no longer looked at the other patients in the same way, no longer called them “idiots,” but instead spent time with them. She even took care of a man suffering from cancer. He had a large bleeding growth that she cleaned and treated every day, using her best clothes when the bandages proved to be too small. “I know that I won’t save him,” she told a friend, “but I want him to go to Jesus with the dignity of a man.” And so it was. She was holding his hand when he died.

Natasha, another patient, saw that little group praying together before saying goodbye, and one day asked if she could join in. She and Gianna began reciting Morning Prayer together. “Here you can pass time as if time didn’t exist,” Gianna told Enrico, another friend who came for charitable work. “The presence of Natasha is the spark that rekindles the desire to continue the journey, even in an insane asylum.”

In the last year, Natasha and Gianna began working on the Russian translation of the book by Giovanna Parravicini: Liberi [Free]. Their charitable work often evolved into intense discussions, looking for the most appropriate expressions.

Last autumn Gianna asked Fr. Adelio, the Bishop of Karaganda, to receive Confirmation. “Every time we spoke about it, she repeated that Confirmation would give her the strength to live intensely, even in those conditions,” recounts Liubov. Gianna had seen a crucifix for the first time in an old French film when she was a child, and had asked her grandparents who that man on the cross was. They spoke to her about Jesus. “But then,” she said, “it was years before I understood that a God who shares all our humanity is not a fairy tale.” Shortly before her Confirmation, her health worsened. The morning of January 5th, friends were informed that Gianna had died. The last time they had met, Enrico had asked her, “Here, where everything is ugly, how do you manage to be so beautiful?” With her special smile that made her eyes close, she answered, “If a person lives in the hands of the Mystery, then you see that beauty.”#CharitableWork