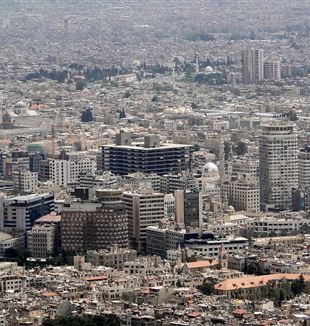 A bomb, right outside. It came from the Jobar district, which is under the control of the terrorists. The house is small. The children watch. They go to hug their mother. “Dad, what was that? What do we have to do? Are we about to die?” Another hit. The fear of the entire country, Syria, is captured in those few square feet. The two small children scream and run around the house. “Stay calm, God is with us. He will protect us.” They sit down in the short hallway. Another hit. Which of the neighbors have been hit? Has anyone been killed? This is the most dangerous part of Damascus. There, in the historic area, people live almost as if there was no war. But here... the sound of the conflict makes the walls tremble. That is, where they’re still standing. “I felt as if I were inside a dark tunnel looking for a way out of this nightmare. Then, suddenly, I saw the icon of Christ in the room in front of me. I saw His face, with no trace of fear, looking at me to say, ‘Do not be afraid, I am here with you and for you.’ I held them close to me, and together we waited for everything to stop.While I waited, the moments in which I saw God’s presence in my life came back to mind. The journey made with our friends in Russia. Those moments gave me strength.”

Where to begin in Soulaiman’s story? From meeting Andrea, the Milanese doctor who came to work in Damascus in 2008? Or from the request to enroll in the Fraternity of CL, signed last August, before the final return to bomb-stricken Syria, after 3 years spent in Russia?

Let’s start on a night in February 2012. Moscow, 27 Pokrovka Street, the Library of the Spirit. Outside, the thermometer says that it is several degrees below freezing. Soulaiman had been in Russia for three months. He only knew a few words of English. His wife and two children stayed in Syria. Jean-François Thiry welcomed Soulaiman, but he did not understand what he wanted. He thought he was asking for work, but that was not it. Soulaiman already had a job: he was a doctor, a hematologist. He had come to Moscow to do the training that he wanted to do in Italy, but since the beginning of the war, there were only three possible destinations: China, Iran, and Russia. He chose the last one for reasons that would seem obvious. One of his thoughts was: “At least there, there should be a few Christians.” The one who had sent him to the Library of the Spirit was Andrea, of course, whom he had met in Damascus a few years before. They had become friends. “I was struck by the way he looked at his patients and the way he looked at me. I even invited him to my house to meet my family,” says Soulaiman. And so, after some days of discomfort in Moscow, news of shrapnel damage and grief arrived from Damascus, and he wrote to his Italian friend who gave him this address, “You’ll see, there you will find some of my friends. They are interested in the same thing that I am: in being Christians in a serious way.” Soulaiman left the Library of the Spirit with an invitation to School of Community.

Like a Prince
“I began to go to their meetings, but due to the language barrier, the conversations were limited. And yet, with them I felt safe and loved. They looked at me with the same gaze that Andrea had. For Easter, I went to the women’s Memores Domini house for dinner. I did not understand what exactly they were, but there I understood that Andrea was a Memor. I felt like I was being treated like a prince; I felt welcomed. I told them, ‘I do not know how you serve God, but you have communicated a sense of belonging and presence.’ That night,I cried tears of joy.” Months went by and Soulaiman got to know the Movement and he felt attracted to it. “My life started to change and I began to see its beauty. The situation in Syria worsened, but I was not disheartened anymore.” In the summer of 2013, he was able to go back to his home country for a vacation. “In my heart there was a new spirit and a new life.” He said , “I was ready to work for my brothers in Syria, but at the same time, I asked myself, How can I show God’s love to a mother who lost her child, or to the child who saw her parents killed by a bomb, or to a family that had to leave everything behind? I had met the Movement, now how could I witness the love that I had experienced?”

A More Mature Faith
After some months, Soulaiman was transferred to St. Petersburg. There too he was welcomed by the small CL community that was stunned by his curiosity and his enthusiasm.During those months Fr. Julián Carrón came to Russia for a meeting. The Syrian doctor had the opportunity to tell him about the drama that he had been living, about the complicated situation in his country, and about his family. He expected the head of CL to give him some words of encouragement, to give him some peace in his heart. But Carrón interrupted, “Your faith needs to mature.” It took weeks to recover from that answer. “How is it possible?” he asked himself. “Does he have any idea what my situation is like?And he tells me that I have to mature?” Then, those words began to seep into his mind. They became the topic of discussion with his Memores Domini friends in Moscow.

In Christmas 2015, when his friend Andrea came to visit him in Russia, Andrea asked if he wanted help to move to Italy, and to have his family join him there. “I told him that I wanted to return to my home in Syria. There were many people who were expecting something from me. Not just my wife and my children, but also my friends and my patients. I understood that this was being asked of me and that because I met my new friends, I would have the strength to do it.”

Once back in Damascus, the first thing he wanted to do was to move out of his house and to take his family to a safer neighborhood. He understood fairly quickly that he did not have enough money to do so. Every morning, to go to the hospital where he works, he has to go through an area controlled by terrorists. “They are seven minutes of fear, and the cross that swings and hangs from my rear view mirror gives me strength and hope. Sometimes I remember the faces of the sisters and brothers I met in Russia; their voices and their eyes speak. The image of their smile takes hold of me and reminds me of Christ.”

Working at the hospital is a daily challenge. There is a shortage of medicine. “It pains me very much. I look at these people; I see them dying. I want to do something for them but I cannot. Together with Tareq and Bashar, two childhood friends, we decided to open a small pharmacy to collect the medicine we can find.We are just starting, but we want to begin soon.” The work in the hospital ends at 4 p.m., then Soulaiman goes to a part of Damascus where he has a private clinic. At 9 p.m. he is home in time to say good night to Elias and Mishia, his children who are 13 and 11.

The pharmacy is not the only project with Tareq and Bashar. Before Christmas, they organized a party for 300 children. “With the help of AVSI, we gave away warm hats and clothes for the winter. We spoke about the presence of Christ in our lives. We were able to have another party for some refugee families who had escaped from other parts of the country. We also brought presents and decorated a Christmas tree for the children in the oncology unit.” His friends in Moscow received a video of children dancing to the beat of a drum, played from a phone. A flashlight was the only light in the room. There is a man dressed as Santa Claus, and another as a clown. The children are laughing. Outside, there is a war.

“Every Thursday we get together with a group of high school kids at the Christian Center,” describes Soulaiman. “We talk about faith. Once in awhile I bring some passages to read, texts read at the School of Community in Moscow. The youth are grateful to be able to read these things. We are preparing with them something for March 21st , which for us is Mother’s Day.” The first people who were curious about Soulaiman’s vitality were Tareq and Bashar. They asked him right awaywhy on earth he decided to return to Syria.

Giussani on Youtube
And he answered that he had met some special friends, and that their friendship made him understand that his duty was to go back. In reality, no one had ever had the courage to tell him to return to life under bombardment. Soulaiman had begun to desire it.

“Tareq and Bashar asked me what this Movement was. They asked me how it was possible for it to change me this way, and I tried to explain it to them. Sometimes I read them parts of texts sent to me, by Giussani and Carrón. One day, they said that they wanted to see what Fr. Giussani was like, so I showed them a short film onYouTube and they were really struck.” Apparently, that short video was not enough, as Bashar, once home, searched the internet for other material by Fr. Giussani. He found another video that was 10 minutes long with subtitles in Arabic. “He told me that it was clear that, in spite of his age, that man, when he spoke about his experience, had an amazing energy.”

Curiosity remains. Coming up in the next few months are the Fraternity Exercises in Lebanon. Soulaiman cannot leave the country, but Tareq and Bashar decided to go.#MiddleEast