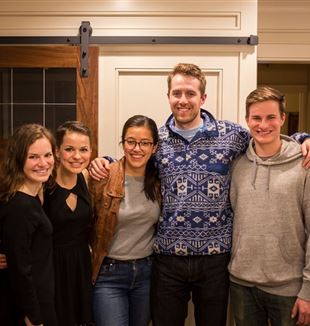 "Welcome back to The Pilgrim Soul, a podcast about the journey of faith in today's world. We are Giuliana, Sofia and Adrianna." Thus begin the episodes of a series of dialogues that were born during the pandemic, designed to keep a long-distance friendship alive and that are now listened to by about six hundred people scattered across 25 countries around the world. The first episodes, dating back to December 2020, are dedicated to the relationship between work and holiness. The others, of which there are now 38 in total and that are broadcast monthly, have touched on topics such as the Christian sense of hospitality, the challenge of suffering, the value of prayer, the education of children, Holy Week, the conflict between people and peoples... At the origin of these discussions is the experience and education received from the movement, which aroused the interest not only of relatives and friends, but also of strangers, Catholics and non-Catholics, who have come across the podcast in various ways thanks to the Internet.

The idea for the podcast came from Sofia, a 25-year-old PhD student in Neuroscience at the University of Cambridge, who involved her sister Giuliana, a lawyer and mom in Washington, D.C., and their mutual friend Adrianna, on leave from the U.S. Navy and now a mother of two children in Boise, Idaho. "I had just arrived in England for my PhD when the lockdown started," Sofia explains, "I saw fear and the abandonment of desires dominate both in me and in those around me. Then I read an article that Fr. Julián Carrón had written in those weeks, in which he said that we could not miss such an opportunity to verify what is really important in life." Sofia was greatly moved by this provocation and, thanks to the work of the School of Community during those months that we all remember as a dark period, she began to experience an unexpected joy. "My heart wanted to shout it out to everyone. I looked at those around me and thought, 'Don't be afraid! There is One who is present with you!""

How to guard this discovery? How to reach "everyone" at a time when only one walk a day around the block was allowed? "I needed to be called back daily. And the movement, the charism, reaches me through faces: those of my family and close friends." At a certain point, her desire became clear: "My need was for a friendship that was open to everyone. And I thought I would start talking about it with my sister and Adrianna." In that dialogue, the idea of a creative project arose, which took the form of a podcast. Thus The Pilgrim Soul was born: a monthly dialogue, recorded remotely, in which the three friends discuss a theme related to the circumstances and the suggestions that come from the life of the movement. The name of the podcast makes it clear right away that thematically there is a desire to experience, as pilgrims, the mystery of what is happening, without concealing difficulties, doubts, uncertainties. The discussion draws on significant readings by Fr. Giussani and others, such as John Paul II, Dorothy Day, Joseph Ratzinger, Mother Teresa, St. Francis de Sales, T.S. Eliot, Padre Pio, Adrienne Von Speyr, and many others. At the end of each episode, texts on the topic and other cultural insights are recommended. "The movement has educated us to recognize, in art, music or literature, the signs of man's religious sense," Sofia explains, "The deep needs of the heart emerge in so many forms of creativity, along with the clues that Christ is the answer to them.” In addition to the insights, a "challenge" is also issued, that is, a gesture to help ensure that reflection on the topic does not remain an abstract reflection. "In the episode where we discussed the conflict between people, we asked our listeners to identify someone in their life who they needed to apologize to, and to go and apologize to them.”

For these three friends, The Pilgrim Soul is a personally enriching experience. For Adrianna, "It's an instrument for continuing a companionship that I am discovering to be so vital. Through the School of Community we are given a lens for recognizing the Mystery in everything. Thus life becomes more meaningful, more significant, more redeemed." Giuliana adds, "It's beautiful how we are continually discovering more in our relationship. I learned from the way they see the world and I returned to my life with a different gaze. The topics we discuss leave nothing off limits and so do not allow me to partition off parts of my life from the encounter with Christ. It’s a constant call to integrity, but one with such tenderness and love because it comes from the faces of my friends. Every time we record an episode I feel rejuvenated because I feel accompanied in my sorrows and in my joys.”

But it’s not easy to separate the personal dimension from that of their listeners. "It's beautiful to see that the Holy Spirit, through us, generates something in others as well," Sofia explains, "We understand this when they write to us to share questions and thanks, which become a help to my journey. And this has changed my outlook on others, on the people I pass on the street, knowing that within them there is a wealth of desire that I want to see grow. Today, compared to the beginning, I feel more open, more full of hope and desire for Christ to be known by all."

Hans lives in Liverpool but lived in the United States for a long time. He has been involved in the movement for a couple of years and came across the podcast by accident. Only after listening to a few episodes did he find out that they were also from CL. "The first thing that strikes me is their friendship, which allows them to talk about faith in a completely different way than the things I've always heard before. And they do it in a very intimate way. Starting from what happens to them at home, with their children, their college friends. It’s not just an abstract discussion about the theology or Church doctrine. They try to make the content of the faith react with what everybody has to deal with. And then, the thing that perhaps strikes me most is the depth and intelligence with which they approach the issues." Micheal, on the other hand, recounts that he had drifted away from the Church and the movement, and in the summer of 2021, he started attending CL again. Around the same time he started listening to the podcast: "Within a few months it was as if I was reintroduced to the content of the faith. It helped me gain a new gaze on the Church, on the world, and on myself. The episode entitled Sharing the Gospel, is a personal favourite, where they invited Fr. Colin Parrish. The way he talked about shame allowed me to have a tenderness on myself that I never felt able to have before. Sofia, Adrianna and Giuliana are truly dear friends. They accompany me on the path toward Destiny."

Genevieve listens to them from Christchurch, New Zealand. Fr. Andrew listens from Gettysburg, Pennsylvania. Bekah is a Protestant who wanted to learn more about Catholicism. Nelly was born a Catholic and converted to Protestantism, says she is in the midst of a crisis of faith and found the link on the American Association of Catholic Scientists website. Kristina says she started reading Communion and Liberation books, and that The Pilgrim Soul encouraged her to look for her nearest community.

Read also - "The poverty of which we are made"

At the beginning of this adventure, the three friends told themselves, "We’ll give the Lord our meagre offerings, and allow Him to do what He wanted with them.” Even today they still feel inadequate in doing what their perceive as a mission. Sofia confides, "I still have to grow a lot in faith and in following Fr. Giussani's charism. But it’s this work that helps me follow the indicated path and it’s a need of my heart to share what I have encountered. It’s from this desire that a new way of communicating our experience was born, which seems to be reaching people who otherwise would never read Fr. Giussani's books, but who are willing to listen to a chat among friends. Therefore, my inadequacy is not an objection, but a responsibility."