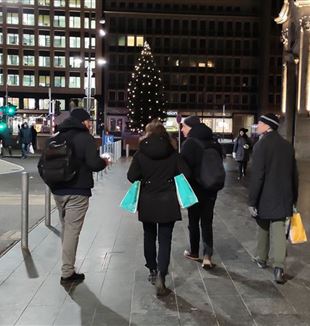 September 2021. After finishing work, Luciano, Andrea and Simone knocked on the door of the parish in the Bonnevoie neighborhood of Luxembourg. They wanted to ask the parish priest to accompany them to hand out food to drug addicts, which the priest does one night a week in some parts of the city. They had been thinking about resuming charitable work after the pandemic for some time. Fr. Laurent asked who they are, what they do, and then simply says, "The reason we are going to see these people is not to carry out a social service, to find a solution to their drug addiction, much less to convert them. We go to encounter Christ who calls through these helpless brothers and sisters." Andrea immediately thought of Fr. Giussani’s words: "We do charitable work in order to live like Christ.” It was Tuesday, food distribution day. The three friends did not think about it for a second; they grabbed a duffel bag, put bottles of water and food inside, and set off with the priest for Abrigado, a help center for drug addicts on the outskirts of the city. While delivering the package of cookies or sandwiches, Fr. Laurent stopped to talk to each woman and man he met. "We saw what he had told us in action. A gaze and an openness to their humanity that changed faces spent by drugs. Thanks to him, their eyes shone again. They seemed to be reborn," Luciano says. "It was what I want for my life: that same gaze, that same embrace."

Other friends joined that first core group, and they began to visit other places in the city where drug addicts hang out. The reality that opened on their eyes was always dramatic. They do not rescue them, they do not convert them, yet something always happens that surprises them. 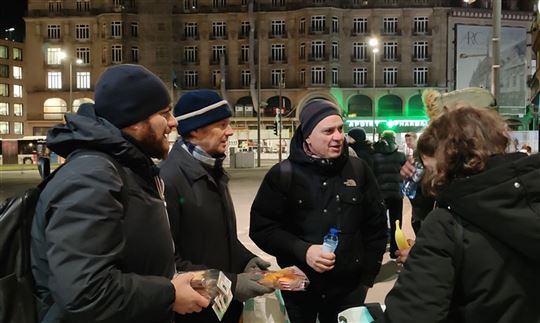 One evening, a man approached Luciano. He staggered, slurred a few words because he was still under the influence of substances. But he smiled when he saw the package of snacks they offered to him. "It reminds me of when I was a child," he said. He has almost no teeth and so soft food is ideal. The volunteers know this, which is why they buy those snacks. The man unwrapped a packet and began to tell his story. Canadian-born, he started using drugs at a very young age, but now he wants to quit. He has made an appointment to enter a community to get help. "But it will take months. Who knows if I will still feel like it then." It is impossible to find an answer. "Do you have a family?" Luciano asks him. "Yes, I'm married." "Do you still see your wife?" "No. She made it, she hasn't done drugs for a few months. You know, I love her and I’m afraid if she sees me again she will relapse." Luciano never expected such an answer: “Such a man taught me, who has everything, what it means to sacrifice yourself for another. At that moment I thought: that is the virginity Giussani calls us to."

These friends often have to deal with the sickening stench of these desperate men and women. Sometimes it is so strong that they find it hard to approach them. It is a factor that makes them angry with themselves. They talked to Fr. Laurent about it, and the priest said, "You must not be scandalized by this feeling of revulsion. Maybe one time you can even resist it, but what about the time after that? And the time after that? It is not a matter of endurance. The only thing to do is to take this feeling of helplessness and place it into the hands of Another, asking Him to transform your incapacity, the poverty of which we are made. You see, this human position draws the boundary with volunteering." On his way home, Luciano thought about the argument he had had with his wife that morning differently. No longer with anger.

As well as food deliveries, once a week the parish also distributes food to those in need. Every Saturday, Francesco goes grocery shopping to purchase the food for the bags to be donated. As he walks through the aisles of the supermarket, he remembers the Ukrainian mother with her small child, the young, homeless Moroccan man he had met that week… They are concrete faces and stories etched on his heart. One day, a man told him he sleeps in the airport until it closes, and then wanders the city for a few hours until the terminal reopens. "It is not too bad, I can stay warm," he said to him. For Francesco, it was a period of great change within the company he works for. "That was all I could think about, I was afraid that I would have a lull in my career. That man's words woke me up and made me wonder: what sustains my life? Is my world only determined by my work problems? Charity asks me to be alive. Today I woke up and because the temperature has dropped below zero, I immediately thought of them."

Stefano moved to Luxembourg six months ago for work. As soon as he arrived, he looked for friends in the community and Luciano invited him to charitable work. One Tuesday, he spontaneously begins to act as a "porter," that is, ordering the queue of people waiting to receive their food, allowing families with small children to skip the queue, and to make them wait indoors when it rains. But sometimes the entrance gets blocked because he stops to chat with them, asking them what they do, their story. And he tells them about himself as well. To Andrea it seemed like a waste of time, but then he noticed that the faces of those people light up when someone spends time with them, and even remembers their name from one week to the next. Until Francesco came and asked them to get back in line so that it could start moving again and everyone can pick up their food. "These friends are a point of reference within the loneliness I experience because I am far from my family, girlfriend, friends. We take care of each other. There are those who are super-efficient, those who are lost, some who are quieter. And there is the lady from the parish who talks all the time. I have learned to value each person's sensitivity. Charity is the safe haven from which to start again," says Stefano.

During a break in a business meeting, a co-worker stopped Luciano: "Excuse me, are you the person who goes to feed the drug addicts?" Seeing the look on Luciano’s face, he added, "Sorry, it's just that I heard about it so enthusiastically from a colleague. She was so happy. I wanted to ask you if I could come too?" A happy colleague? That seemed impossible to Luciano. On Tuesday evening, when they had got to Abrigado, a man had come up to him shouting and brandishing an iron bar. It was a moment of panic and immediately the drug addicts stepped in to form a barrier to protect them. The man left swearing, and they started handing out the food. That co-worker had bent down to talk to a girl. Her fear had melted away; it had not affected that encounter for a second. A few weeks later, that co-worker told Luciano, "Yesterday I was in Abrigado. I am grateful, this morning I feel more true."

Cristina had also tried. One evening she had ventured to accompany the volunteers to the drug addicts, but she was so scared that she did not end up going in. To her, and to other friends who for various needs could not do this charitable work, Fr. Laurent suggested Eucharistic adoration. To pray for their friends around town, for the people queueing for food: to make memory that only Christ responds.

Read also - Chile: Peace is the only possible path

One evening they met Fr. Laurent, thanking him for the work they had done together. The priest replied, "It is I who thank you. I am impressed by how you are, how you welcome them, because you help me stand before this derelict humanity. Bring me that booklet you always read at the end (The Meaning of Charitable Work), I am interested in reading it." The next day, they send him the French version of the booklet, written in Milan in the 1960s but still as relevant as ever. The organization of it is not always perfect; sometimes there is not enough food, and their sense of helplessness is strong. "But what strikes me is an openness of humanity. We are on a path where we do not have to censor anything," says Luciano: "That is why I go back every Tuesday."