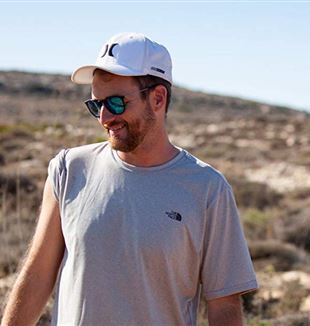 The Village Voice, the left-wing, New York news and culture paper, called it “a miracle”. This is the review of his latest film, Paul, apostle of Christ, that TJ Berden is proudest of. The film, released in the USA in 2018 and in Italy in 2019, is a ODB films production, which is a Californian film company that specializes in religious themes and of which TJ is Vice president and producer. "I think that by "miracle" they didn't refer so much to the film itself as to something they discovered within the film and that moved them away from some prejudices", explains TJ. He was born in Los Angeles, 34 years ago, and was baptized with two initials that don’t appear to arouse any curiosity. "We begin from an original point and we try to put it into our work, and its not just a religious premise. It's something we want to give space to, that we let happen in the film, allowing it to change everything: the plot, characters and spectator", says TJ, surprised that all this is more easily noticed by non-believers, as you can see from reading The Village Voice: "it asks to be taken seriously, which might make it a harder proposition for the unconverted. It doesn’t shy away from complexity, and for that we can all be grateful — believers and heathens alike. Paul’s words are not those of a man who is serene and happy. At one point during their conversation, he speaks to Luke of love, echoing the immortal lines of his first letter to the Corinthians. It’s bracing to see these words — these wedding ceremony platitudes, so often delivered with earnest smiles and adoring glances — uttered by a grim old man in a dark cave waiting to be executed for a crime he did not commit. Mercy takes work." 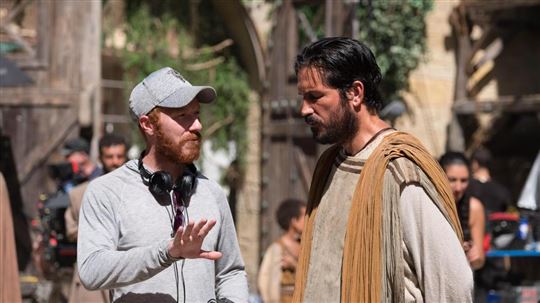 There is a phase of the work that precedes the making of the films, which is perhaps the most delicate phase. It often takes longer than shooting. "It's a phase of exploration that we've called "creative exploration," says TJ, who, a promising young theater actor in Chicago, let himself be tempted by the film industry and returned to Hollywood where he began to make his way in several productions, including The tree of life by Terence Malick. "I don't write, I develop the scripts to make them functional. It’s similar to an architect’s job, I have to identify the story’s point of support and what will allow it to grow. In doing so, I let myself be guided by two questions: "What is the truest thing we can narrate? What is most likely to have happened?". It's a journey that starts from an identification with the facts and characters we want to portray".

This is what happened with the film about Saint Paul.The initial screenplay was 140 pages long, which is equivalent to 140 minutes screen time: TJ and his team arrived at 90 to the sound of questions, discarding what was not needed and keeping only what worked. A job of finishing touches that lasted two years. "We wanted to touch the most interesting aspect of Paul's life, that is, his change from executioner to victim. The limitation of some epic films is that the humanity of the characters is set aside a bit. I wanted to take care of Paul so that I could bring out the depth of his person and make what Giussani calls "the religious sense" vibrate in him. What came out was a character who was alive, marked by sin, but, precisely for that reason, profoundly authoritative". The whole film was shot in Malta and TJ wanted the crew and actors (including Jim Caviezel, Jesus in Mel Gibson's The Passion, who plays Saint Luke in this film) to be inspired by Caravaggio's painting in the cathedral of Valletta. "The Beheading of St. John the Baptist is a shocking work: it is horrible and beautiful at the same time. We too have tried to paint the film’s most violent scenes, trying to maintain that level of dignity and beauty in the story. We used a special camera to create super slow motion sequences, precisely to achieve the effect of a painting in motion".

Full of Grace, filmed three years earlier in the barren Californian nature, also came to light following the same path. The film tells the story of the last days of Our Lady's life, marked by her close dialogue with Peter, troubled by the many problems that afflicted the first Christian communities. Work on the screenplay, day after day, always began from a question that TJ asked the whole team: "How did the encounter with Christ continue to mark their lives? How could they follow, after Christ had left?”. “The work done in those months looked resembled a School of Community”, recalled TJ. "I still have in mind the director, Andrew Hyatt, and the executive producer, Eric Groth, sitting in the office immersed in reading Giussani’s At the Origin of the Christian Claim. For them, the idea of Christianity as an encounter was something revolutionary and they wanted it inside the film".

And it is precisely the idea of the encounter that marks the turning point in the plot. The apostles began to take charge of everything only because of that experience of fullness that arose from their relationship with Jesus. "That's why there are six flashbacks in the film that take Peter back to that first day, when he heard the Lord call him by his name. He could not continue to live without finding that gaze". An hour and ten minutes of film, shot with very little money and in a few days, based "only" upon this event. "We have reduced everything to the bone, taking a great risk. We asked ourselves a thousand times: "Is this enough? And is this, instead, really necessary?". The only thing clear to everyone, however, was that there is no stronger or better idea, to explain how faith happens, than the example of falling in love. You don't love someone because you study them in books, but you come across a person who instigates in you the desire to be with them. And the public appreciated this existential way of living faith". 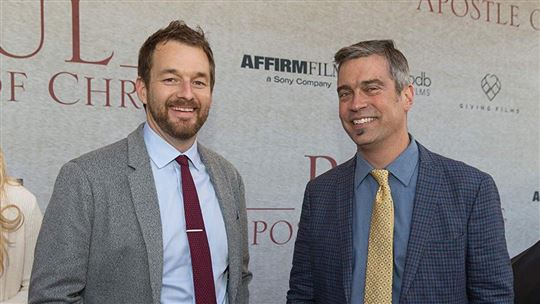 Today, TJ Berden is working on a new production. The life of St Patrick, Ireland's patron saint, has been meticulously scrutinised by the whole team. "He is an often misunderstood character, reduced to parades and celebrations in various Anglo-Saxon countries," explains TJ. "In a historical moment like ours, where Christianity risks not being able to attract people, I'm interested in discovering the nature of this man's faith. Why was he able to fascinate the Celtic people?". In the biography of the saint there is a temporal gap that no historical source has ever managed to reconstruct. Kidnapped at the age of 16, he returned home to his family six years later, with faith. How and why, no one knows for sure. The questions that the scriptwriters have concentrated upon live up precisely to this missing link: how did God enter his life? What happened to him? "Of course, we could have imagined God talking to him: it would have been something compatible with the culture of his time, but we wondered if such an approach could still suggest something significant to man today. And so we risked," says TJ, taking care not to reveal too much of the plot. “"Our" Patrick is a very modern man who has rejected the faith of his fathers, but who rediscovered it, regained it through a path made of freedom and reason".

In 2008, TJ's life also intersects a fact that will make him follow unexpected path. He was at a party at a club in Los Angeles, with his usual friends. His spirits begin to warm after his fourth beer. "I don't know why, but on that occasion we started talking about great ethical issues and the Pope. My friends knew that I was a Catholic, and every now and then they teased me". A small crowd forms around them, a girl full of tattoos listens with interest to TJ's arguments. At the end of the evening, she approached him and said: "Look, you should meet some people, from Communion and Liberation".

READ ALSO - With your heart at work/1: From chocolate to life, a question of taste

He doesn't know what she's talking about, but, the week after, he goes to a meeting with her. "There, I met Carlo and he became my friend. A friend like I'd never had before. We went to concerts, restaurants, matches. He was attentive to everyone's needs and loved his work. Soon I realized that he really enjoyed life, for that unique relationship that he lived with the Mystery.” It was the encounter that made him certain of his faith. And that, over time, kept him more and more glued to the road that made these friends so interesting. "After all, in my films, I have done nothing but recount what happened to me that day".