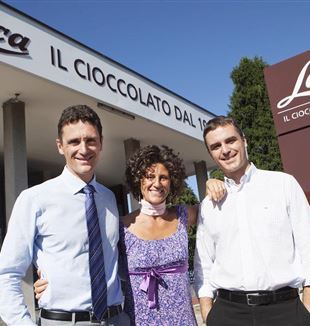 It's a problem of taste. Of chocolate. But also of life. After all, it’s a continuous search for everyday quality, "something that really lives up to the beauty I've come across". Fabio Saini, 45 years old, is an entrepreneur from Arona, an area in the province of Novara that overlooks Lake Maggiore. Together with Lucia and Andrea, two of his five brothers and sisters, he has been running Laica since 2005. Laica is a chocolate production company that was founded by their father in 1946 and, today, has turnover of 50 million and, in high season, has 250 employees.

Fabio, an engineer and now technical director of the factory, has had this passion for a long time. “We never had chocolate at home. Dad left his work outside the home, even if sometimes, when we were a bit older, we would go to the factory to help package the good, to earn two lire during the summer”. Today, in his corporate overalls and cap, he tells us about his father, an orphan at the age of 21: “My grandfather was killed by the fascists for having opposed the seizure of the bulk of his mill, one of the most modern in Europe at the time, which is where my father worked". Two years later, the chocolate factory was set up."I don't know where the idea came from. But I remember that he said that he often went to visit an aunt, and in the afternoon he would go to eat bread near a chocolate factory…the sandwich was empty, but the smell of cocoa made it taste better.” 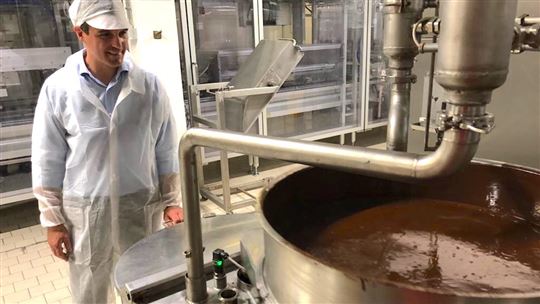 Only four ingredients are at the base of everything produced at Laica, from chocolate coins to bars: sugar, milk, cocoa mass and cocoa butter. "And then there is the know how, characteristic of every company”, including special machines, production methods and secret "recipes". Okay, is that all? Is that enough for a company to work well? What does the search for a taste for life have to do with this?

"For me, for some years now, going to the factory has also become a discovery of how faith is implicated with work. It's not a theoretical problem, a cliché: "Quite the contrary. It's the great desire for life to be “one”. At dinner, with him, his wife, his four children and a couple of dear friends, we need to dig deeper to understand this connection better.

Let’s backtrack a few years. To Fabio’s mother "who had always educated her children in faith, living it first-hand". At university, he met Maura, his wife, and the movement of CL that she followed "It was interesting, even if I didn't understand much of what Giussani said and I didn’t like certain relationships. But, in time, Maura’s friends became mine too". It wasn't enough, however. "It was little. Even after our wedding: I had a good job, a nice house, a beautiful family that was growing...". But I remained dissatisfied. I started to get involved with the Food Bank, then with the Banks of solidarity... But everything was still too narrow". Then I met a friend, Andrea Franchi, president of the Bank of solidarity: "I had heard him speak at an event, and then I had gone to meet him. He talked about a Christianity that interested me. He spoke about the unity of the person, of being able to live a united life, not in watertight compartments". Having been invited to a summer holiday in La Thuile, Fabio found Andrea waiting for him in front of the hotel: "He was there for me. He was the Other who embraced me, just as I was. And from there everything changed". That embrace became the new criterion for going to work. "Like a gaze that was mine but that was ‘not mine’, on everything".

Changed? "Yes. Through these discoveries, I found myself changed. In the way I act, everywhere, even in the company. And in the way I look at some things.” For example, in his project to expand the company. “It involved creating a new warehouse to make production more efficient. I had worked for months with my brother Andrea…Nearly at the end, my brother rings me and says "I was thinking that we could do it differently.” What, how? After everything we'd done, studied... I could've reacted. Or I could've taken that news seriously, maybe I'd missed something". A few years ago that wouldn't have happened: "Instead, we looked over everything, discovering that my brother's proposal could be useful for another project". And faith? What does faith have to do with it? It’s something that doesn’t allow you to remain defensive.” Isn't entrepreneurial genius enough? "I don't know I think it's difficult. One must depend on something. That's what we're made for. If you don't depend on God, what do you depend on? From your pride? Being sustained by Someone who has embraced you, as happened to me, places you in a condition of freedom and openness that…I was not like that before: I would have reacted badly to my brother.” Even Maura was struck by this: “It’s not that you don’t accept it without hurt. Fabio was very angry. It’s not easy to work with him, he keeps everything under control, and you almost get performance anxiety when you have to deal with him. Entrepreneurs like to stick to their own project. It's clear that there, little by little, he let Something else in.”

What did he let in? "I remember, for example, when Lucia, my sister, was at home on maternity leave," Fabio explains: "Her work fell on my shoulders. I usually like to solve problems. But at a certain point it was too much. I was suffocating. The reality in front of me couldn't just be a series of things to fix.” That sensation of gasping for breath broke my scheme. "Reality happens and dislodges you. And it changes you. You don’t suddenly become “better and kinder": "No. But, slowly, you don’t let anything pass without thinking about the embrace you received".

This is what happened with his colleague who, even in the face of a salary increase, threatened to leave because another opportunity had arisen. "He's been with us for many years. In front of an almost rude email, of protest, which bothered us, we could have said "go ahead". Instead, "You wonder why he did it, what his reasons are, what need he's trying to respond to. Because you know your own need”. Fabio talks to him, explains his reasons, "embraces" him. He understands, apologizes. A few days later, they come across one another on their lunch break and the man says to him: "But... You love me a little bit".

And when this isn’t enough you need to ask for help. "This happened, for example, with a group of friends who are entrepreneurs.” Two employees had had a big. "One of them had to be fired," says Fabio: "No one had anything to say, it was a serious matter. But such a schematic judgement was too superficial. What was really at the bottom of that story, of those people?". An idea was born from a dialogue with some friends. Fabio tries to talk to the two women: "It was difficult to talk to one of them. With the other, the one that was to be fired, the situation was complex. I told her that I would ask all the other employees to reinstate her, as long as they all agreed”. But that wasn’t enough. “I invited her to help me prepare the food packages for the Solidarity Bank, because, there, with my friends, I’m educated to stand in front of my heart and in front of my need. And she was happy, she felt welcomed.” A few days later, at the company Christmas dinner, Fabio spoke to the employees: "I asked you if we could take her back, but only a few of you said yes. And she didn't come back. So what? It doesn't shock me. My gaze was born from the recognition of an embrace that I had received. Without this, one cannot understand...".

When reality is look at this way, it is more fruitful. He says again: "An entrepreneur is, by nature, someone who has to put his hands in reality. And depending on his substance, that is, “what he depends on”, he will be able to grasp the positivity of what happens in front of him” But not only this. "The greatest opportunity is to discover that the other is a gift. A collaborator not only brings work, but is the possibility of a good for me”. Does it make a difference? "It hasn’t always worked. I don’t even know if there is a better business strategy. This is my story. Every circumstance that I have lived in this way has been an opportunity to grow. And it has been enjoyable.”