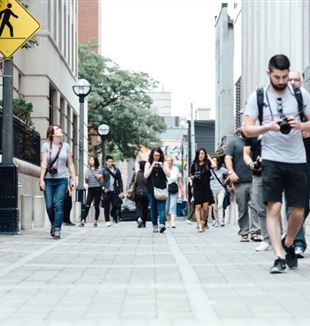 In March, we had a Disarming Beauty presentation centered around promoting unity. As we were meeting for Disarming Beauty over the summer, there was a branding campaign in our city entitled “E is for everyone.” It was all over the city, there were billboards everywhere, in attempt to give ourselves a sense of identity as a place of inclusion and unity. So, we started discussing this: What did this mean? We determined that it was more than just a strategy to bring people in, or a branding initiative, but something greater about what makes life worth living. We decided to have a discussion about this.

In light of Disarming Beauty, we wanted to talk about this within the community. We initially thought we could invite the mayor to be a part of a public presentation. Ultimately, we didn’t do that, but we did reach out to his office and he was able to meet with a couple of us who gave him the book.

In the end, we invited three people from our town to the discussion we titled “The Search for Unity in the Face of Diversity.” We used a quote from Disarming Beauty which says, “Unless we accept the elementary experience the other is a good and not an obstacle to the fulfillment of our ‘I,’ in politics as well as in human and social relations, it will be difficult to emerge from the situation in which we find ourselves.” We invited a Methodist minister, a child psychologist, and a Muslim restaurant owner. We had a relationship with some of these people, but they may not have known one another. So, about a month before the discussion, we hosted a dinner for them to meet each other, and begin the discussion and the friendship.

The day of the discussion, I drove with my friend to get things set up for the event, and he said, “There are times I wish I hadn’t proposed this. It’s a risk in being vulnerable.” But it was a very beautiful discussion. It exceeded my expectations, certainly. One of the things that were most striking to me was that someone said, “Life is greatly influenced by others, and we need to be willing to listen, not with the thought that we know the answer already. If we do, we are missing the opportunity to learn more about others.”

The restaurant owner was also very open. He said, “Don’t be afraid to ask me anything. I am willing to answer questions, I am willing to speak and to learn more about the others as well.” This has been something that I’ve been thinking about since then: How do I face this? Do I enter into conversations with people at work and people I meet with the idea that I already know what’s going to happen, or open to what is going to happen?

An example of this is that, a few months ago, some of us from the Fraternity spent a weekend together and we went on a hike in Natural Bridge State Park in Kentucky. One of the kids wasn’t able to go on the full hike, so she and her mother took a chairlift and met us at the top of the Natural Bridge. After the hike, when we got back later that day, we were talking about how we could not only help each other at the top but how we could journey with each other. I think this discussion has been very helpful as well as the discussions that have happened since then.