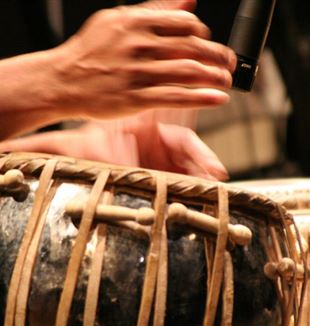 In May 2017, the theme of the 2018 New York Encounter, “An ‘Impossible’ Unity,” was first introduced. Its description alone invites consideration of its summary and lingering questions: “In the end, the unity we long for seems impossible. But what if it is possible? How can it happen?”

As an educator in the Catholic tradition, I can easily succumb to ideological responses to such questions–at times unaware until I am provoked in a way that causes reconsideration of how I live in relationship with the Mystery. Such a provocation happened at the Sunday evening presentation given by Sandeep Das, India’s top tabla maestro, founder of Harmony and Universality through Music (HUM) and member of the Silk Road Ensemble (SRE) which, in collaboration with Yo-Yo Ma, composed the 2017 Grammy Award-winning album, Sing Me Home.

Moderator Gabriele Vanoni, composer and assistant professor at Berklee College of Music in Boston, introduced Das to the audience by highlighting the “impossible unity” between Das and Ma, a French-born American cellist of Chinese descent, songwriter and multi-Grammy award winner, and by asking Das, “What does it mean to be united with someone who has a different start, a different background? What is the root of this unity?” These questions quickly brought the crowd closer to the heart of Das and Ma and the friendship they shared for nearly twenty years.

The organizers of the prestigious New York Philharmonic did not know that the Indian tabla player–brought to the United States two days before the performance of four world premiere concerts–had never seen a music stand and was not able to read the music sheets placed before him. Pin-drop silence filled the space until Das requested for the orchestra to play the twenty-eight-minute piece just one time through so he could memorize it, as he had been trained. Again, silence! Coming to his rescue was, in Das’ words, “the man with the big ‘violin’” who rose to say he was familiar with the odd practices of Indian musicians and that the piece should be played through as requested. Das spoke of how great he immediately thought this man was, but it was not until the first touch on his instrument that Das’ heart was moved. Struck by this experience, he inquired about this man at the first break only to learn that this cello player was none other than Ma, whom he had never heard of.

Taking us back to this encounter, Das shared that the real beauty of this introduction was not Ma’s fame, “It was the first touch on his instrument that did something to my heart.”

Desirous to learn more about the SRE’s point of unity, Vanoni asked Das to speak on the process of working together as musicians from different cultures, training, philosophies of composition and performance. To this, Das replied, “I think being human is the ultimate reason or goal that anyone should have and the reason this ensemble works is thanks to Yo-Yo being at the top–what we value most. Music is just an excuse for us to be together. What we value most is the human experience.”

The SRE does not belong to Ma. He encourages musicians to bring themselves, their gifts and their ideas to the group, which Das attributes to the success of the SRE. Some pieces may be repeated, some may not, but it is all welcome in the family. For Das, it is about family. “You know twenty, eighteen years back I didn’t know what a cello was,” he said. “I didn’t care if there was an earthquake in Azerbaijan. I didn’t care if there was a fire in California but now I care because if there is an earthquake in Azerbaijan, I have family there.”

Das recognizes how much the lives of the SRE musicians have changed thanks to Ma and his vision. Tabla playing makes up only a portion of Das and this awareness has moved him to work with the Indian youth, to inspire them not only to music but to live in a different way; hence the birth of HUM which now has six visually impaired children who are supported in every way.

Vanoni, quoting from the homily preached by then-Cardinal Joseph Ratzinger during Msgr. Luigi Giussani’s funeral in 2005, said, “Fr. Giussani grew up in a home—as he himself said—poor as far as bread was concerned, but rich with music, and thus from the start he was touched, or better, wounded, by the desire for beauty.” He then asked Das to comment on his experience with the SRE with this quote in mind. “The SRE is not an ensemble of music,” responded the other. “It’s changed our lives. I remember being in Kazakhstan. We were told by security that it was not safe for the SRE to go there, that there was chances of abduction yet, we all decided to go. Going to this small village after I played a solo, there were three people older than me who came and hugged me with tears. The next day they were waiting at the airport with lumps of sugar and shots of vodka. That’s beauty! You know, I didn’t speak their language, I didn’t talk about religion with them, I don’t look like them but something I did with my instrument made them cry. You know, probably healed a wound.”

And so I am provoked! Did that touch of the instrument contain within it the same Presence of Mystery that brings about the unity we all long for?#NewYorkEncounter