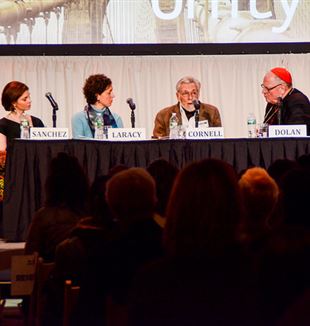 On Saturday afternoon, in the midst of immense applause, the panel of speakers took the main stage at the Metropolitan Pavilion to discuss the impact of Dorothy Day upon their lives. The panel aimed to discuss the unity within Day’s life and her ability to bring unity to others. Panelists included Archbishop of New York, His Eminence Cardinal Timothy Dolan, Tom Cornell, former managing editor of The Catholic Worker and Dr. Margaret Laracy, a clinical psychologist and curator of the Encounter exhibit exploring Day’s life.

Dolan began the conversation by recalling Pope Francis’ mention of Day during his address to Congress last September. In a jovial yet serious manner, Dolan told of his asking the pope if he would be willing to declare Day venerable the following night at Madison Square Garden. Pope Francis, after a night of consultation with Rome, told Dolan it would take some time, but shared his love for Day and confided he would one day like to beatify her. 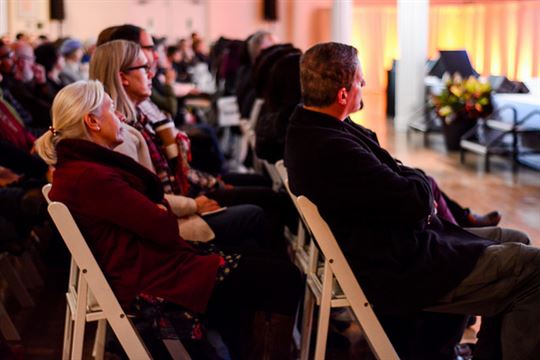 With confidence in her sanctity, Dolan described Day’s life as “a religious Odyssey and journey” equal to the likes of St. Augustine and St. Ignatius of Loyola. He spoke of her constant conversion of heart toward Christ, her interior faith and piety and her holistic approach toward the human person as attributes of hers that most impacted him. Day was a social activist, a former member of the communist party and lived a life of promiscuity before her conversion to Catholicism in 1927. Following her conversion, she went on to co-found The Catholic Worker newspaper and movement in 1933. “You and I usually think of her as a great social activist, and indeed she was,” Dolan said. “But first and foremost she would be a disciple of Jesus Christ.” He recounted an example of her faithfulness to the Eucharist from 1968 when Dorothy traveled hours by bus from New York to Milwaukee and was asked to address the Peace March upon her arrival. She was glad to do it but insisted that first, she needed to go to Mass because she hadn’t been that day. Dolan concluded by speaking about Day’s fidelity to teaching, learning, camaraderie, prayer and subsidiarity all the while emphasizing the origin of the grandeur of her life: “She was a remarkably spiritual woman and her faith gave rise to what she did.”

Cornell, former managing editor of The Catholic Worker and co-founder of the Catholic Peace Fellowship and of Pax Christi, USA, began his account by recounting how he first encountered Day in her book The Long Loneliness. Cornell read the autobiography after it was published in 1952 when he was about twenty years old and was astounded by the adventurous life Day was already living at his age, leading him to exclaim, “I was nineteen [or] twenty years old and what was I doing? I was a freshman at Fairfield University studying English Literature and Dorothy was helping to make it!” After reading her autobiography, Cornell knew he had to meet Day.

Cornell’s first in-person encounter with Day was at a meeting in the Bowery of New York City. Walking through traffic and throngs of people and stench and illness, Cornell arrived at the meeting and heard Day address how young people cannot do great things if they are concerned about security; she was speaking passionately and quoting the Bible seamlessly. “By then, I knew she had me,” he said. From that moment on, Cornell’s life was captured by the work, fidelity to God and the friendship she proposed while living her life–that meant anything from peeling potatoes to helping the civil rights movement reintroduce the classical theory of nonviolence. The fundamental fact Cornell understood about Day through their friendship was, “Everything she did began in prayer, was sustained by prayer and became fulfilled by prayer. Without a strenuous, disciplined prayer life you cannot do this type of thing.” 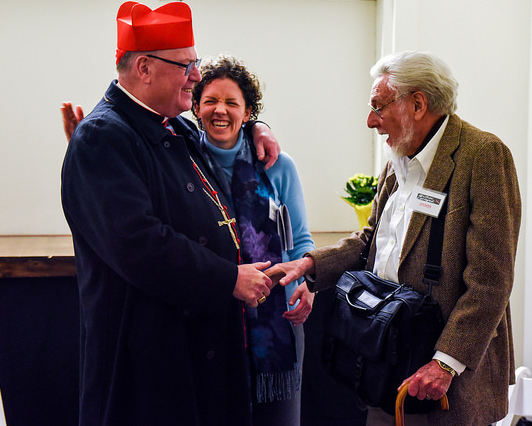 Clinical psychologist Laracy concluded the conversation, delving into her experience researching and curating the exhibit on Day’s life. Day was someone Laracy learned about in her childhood but had not remembered until a speaker mentioned her at the 2017 Encounter. Through conversations with friends and in contemplation of this year’s theme, “An ‘Impossible’ Unity,” Laracy realized Day was a perfect subject for the exhibit. “I … thought it would be beautiful for her to be here [at New York Encounter],” she said. “This was her city and she has a lot to say to us.” Laracy was particularly struck by Day’s attention to the individual and her ability to give people what they need, an example she desires to emulate in her work with her patients.

Inspired by Day’s activism and love of peace, Laracy discovered three points of unity in Day’s life that made an impression on her during her research: Day’s friendship with Peter Maurin, co-founder of The Catholic Worker, her solidarity with the poor and her affection, though not instinctual, for St. Thérèse of Lisieux. Laracy emphasized that Day recognized her friendship and esteem for Maurin–a man very much her opposite and her senior–Anna–an eccentric homeless woman who lived in a Catholic Worker house–and St. Thérèse–a young cloistered French nun–was not something natural or self-produced, but rather a testament of the unifying power of the love of Christ. Laracy concluded with a statement about Day and St. Thérèse, declaring, “I want for the heart of my life to be the same thing that was at the heart of the lives of these two beautiful women.”#NewYorkEncounter