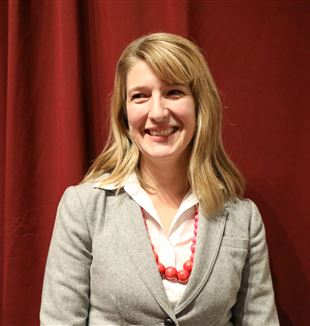 Dante Alighieri’s epic poem, The Divine Comedy, consisting of three cantinas with thirty-three cantos each—14,233 lines altogether—can be intimidating. But this should not prevent us from reading and discovering the immense richness and beauty of the fourteenth-century poem for ourselves. So explained Elizabeth Anderson, Ph.D., in her commentary on Dante’s famous work, In the Middle of the Path of Our Life: The Divine Comedy For Ordinary People Who Want to Live Extraordinary Lives, at the 2018 New York Encounter. Although some devote their entire careers to studying the poem, Anderson reminded us that it was intended to be accessible to everyone, since Dante chose to write it in Italian as opposed to Latin.

Anderson explained that although not a Dante scholar herself, the poem “still affects [her] life every day” as a stay-at-home mom of three young boys. Some example she gave: every fall, Inferno’s depiction of souls falling into hell like leaves falling in autumn comes to her mind, or—as happens in Purgatorio—the experience of emerging from a dark wood and seeing a vibrant sky, or perhaps the most obvious example, the fact that she and her husband named their dog after one of the Comedy’s main characters: Virgil.

In her presentation, Anderson wanted to share her deep love for the poem in an effort to show how it is both accessible and absolutely worth reading—how the “feast” that Dante lays before us enables us to take our daily occurrences deeper. Part of the appeal of reading Dante is that his universe is marked by unity and sustained by love, two factors which are noticeably lacking in the fabric of modernity. The unity and order of the uni-verse are reflected in the poem’s very architecture: Anderson explained how the entire Comedy has a center from which the poem’s symmetrical structure emanates or radiates, like ripples in water. This center, found in Purgatorio XVII, contains the key to the entire Comedy, which is unsurprisingly that of love. 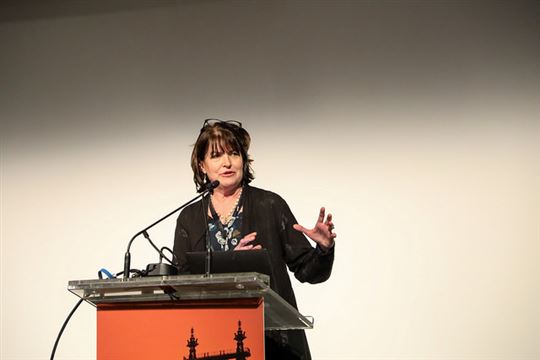 Anderson’s talk was centered around the two main characters that guide Dante on his journey: the great Roman poet Virgil, and Beatrice, whom Dante met and fell in love with at the age of nine and who represents God’s grace and blessing in the poem. Virgil embodies the wisdom of human reason before the light of Revelation and guides Dante only as far as the top of Purgatory before he vanishes. At the entrance to Paradise, Beatrice appears, her face veiled, and Dante is overcome with shame for his sins which caused him to stray far from the path of sanctifying grace.

Anderson’s way of describing the elements of the Comedy was most charming; more than once did the full room laugh at the relatable ways she recounted various scenes in the poem. She would paraphrase bits of dialogue between Dante and Virgil—such as the scene in Inferno’s fifth Canto where Dante is enraptured by the plight of Francesca and Paolo, or Beatrice’s berating of Dante to the angels in Paradiso—in ways that allowed the audience to quickly relate to the emotion and tension at play. Her love and enthusiasm for the poem were palpable and contagious, and many a listener who has yet to discover the riches of Dante was given a delightful introduction to the beauty of his work.

Anderson invited her audience to take in The Divine Comedy as “a personal treasure.” She cited journalist Rod Dreher who claimed that Dante’s poem saved his life, and who exhorts all to “let the Comedy read you.” Indeed, Dante’s triptych is inexhaustible in the truth it expresses about love, hope, relationship and redemption. Msgr. Luigi Giussani has said that “the documented purpose of good books … is encountering the story of people who, having lived reality intensely and endured its provocations … have arrived at the unforeseen discovery of a positive answer.” Reading good books, especially great authors such as Dante Alighieri, is what the Well Read Mom aims to do. It is a continual work that teaches us “to understand who we are and where we stand,” as Italo Calvino writes in his excellent short piece, Why Read the Classics?—no matter whether we are at the beginning, middle or end of the path of our lives.#NewYorkEncounter