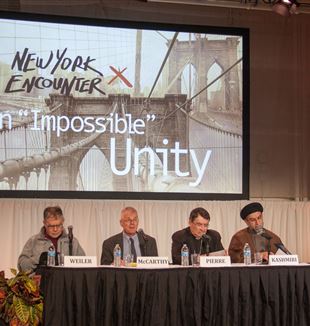 Why do so many people overdose on narcotics? Why is it difficult for even more people to say the words “I do” to a lifelong commitment to someone else? With these questions, Joseph McCarthy, Ph.D., introduced Sunday evening’s New York Encounter panel entitled “Abraham and the Birth of the ‘I’,” indicating that the word “I” has been emptied of its contents for many today. Anyone can use the word “I” to refer to themselves, but what does it take for a person to grow into a full awareness of who he or she is?

The three panelists were united by their spiritual descendance from the prophet Abraham, despite their distinct religious convictions. Joseph Weiler, a Jew, Imam Sayyid M. B. al-Kashmiri, a Muslim, and Archbishop Christophe Pierre, a Christian, addressed the claim that “we cannot understand the ‘I’ if we do not start from Abraham” in light of their unique experiences. 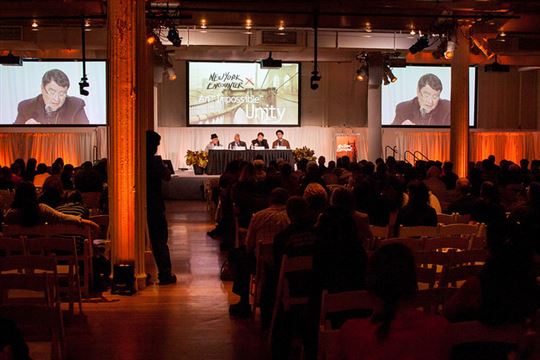 Weiler chose to focus on the significance of God’s covenantal relationship with Israel as initiated through Abraham. “This covenant, which is a covenant between sovereigns, revolutionized religion.” This gesture exemplifies God’s respect for man’s freedom, thus introducing a shift in the dominant understanding of humanity’s relationship with the Divine. “It is man’s capacity to say ‘no’ that makes his ‘yes’ meaningful.” God’s covenant with Abraham enabled man’s reason to pursue a truth that affirms his own existence.

This covenant can be likened to a seed, claimed al-Kashmiri. Surah Ibrahim of the Qur’an states that this seed is like the “good word” that was spoken to Abraham, which then grew into “a good tree, whose root is firmly fixed and its branches high in the sky.” The fruit that grows from this tree is unity. It could be said that the same word that gives birth to the “I” gives birth to the “we”–to unity amongst all of the children of Abraham.

As children of Abraham, said al-Kashmiri, Christians, Muslims and Jews are obligated to listen to and to understand each other by engaging in open and critical dialogue. This dialogue, which must take into account the similarities, differences and difficulties that will arise, is the path toward unity with each other, as well as with the world as a whole. In this way, the branches of Abraham’s tree seek to reach out to all people and draw them into this unity, even if only imperfectly so.

From his experience as a Christian, Pierre understands God’s covenant with Abraham as the foreshadowing of the Incarnation. God’s method of encountering individual “I”s throughout history is brought to fulfillment when God himself becomes a “You.” It is in the encounter with the splendor of this You that the heart–the most profound depth of the “I”–is realized in its fullest magnitude. Pierre attributes the modern man and woman’s alienation from the “self” to the reduction of the heart and its desires. The modern person naively depends on political schemes and the allure of autonomy to give value to their “I”, but it is only in the encounter with this You that the true needs of the heart are recognized and fulfilled. 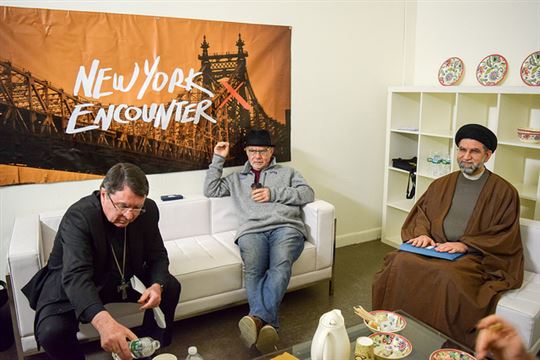 If we are going to be “realists,” we must recognize that Christians, Muslims and Jews all hold distinct convictions that pose significant obstacles to unity. But if this is the case, what was it that brought these men to the stage to share and listen to each other’s experiences? al-Kashmiri said yes to the invitation to speak at the Encounter because he was immediately struck by this year’s theme: An “Impossible” Unity.

“I saw this to be something positive from the very beginning. I decided to extend an open hand to this invitation-as this is my religious obligation … especially in these days. In a world that is so divided, we must speak with one voice.” In a sense, God’s openness to reaching out to humanity should impel Abraham’s descendants to reach out to each other with openness and curiosity, claims al-Kashmiri. On his experience over the weekend, he said, “I came to learn about and to try to understand the experience of the others. In these days visiting [the Encounter] I feel that we built real relationships and established a bond.”

The “impossible” unity which occurred on–and off–stage offers an important witness to the world today. Even amidst disagreements about the Absolute itself, these men’s desire to understand each other trumped the instinctual drive to defend their beliefs. Perhaps the encounter among these men can provoke us all to give way to the desire for unity to drive us to engage in meaningful dialogues with all people, even those with whom it may seem impossible.#NewYorkEncounter