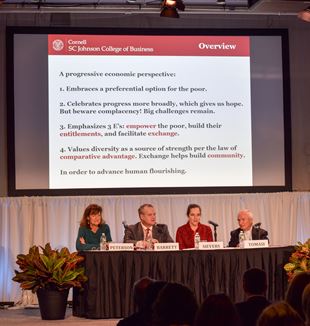 The Saturday morning session of the 2018 New York Encounter entitled “The Fundamental Economic Resource: The Human Person” was well-attended, despite being about the seemingly arid topic of economics. Holly Peterson, principal designate of Nativity of Our Lord School in Broomfield, Colo., moderated the panel and began the discussion with extensive biographies of the speakers.

Archbishop Silvano Maria Tomasi, Apostolic Nuncio, was the first to speak about the “increasing gap between the haves and the have-nots” in both America, as well as the world. “As you look at the human family, there are growing gaps between the categories of people. So, how do we respond to this situation? How do we change the economy so it will be a resource for everyone?” Tomasi posed. “We need to humanize the economy.” Throughout the course of his address, Tomasi emphasized the fact that divisions and the culture of individualism can be addressed through the dignity and vocation of work. “You cannot have a solid economy without the respect of the person,” he said, emphasizing the importance of supportive dialogue at the national level and making sure the weakest voices do not get silenced. 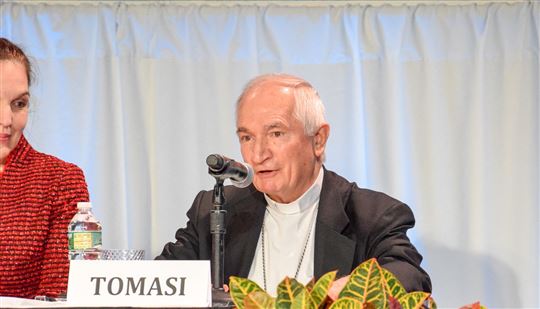 Continuing on the trajectory of empowering the more vulnerable people in our world, next to speak was the animated and energetic Sara Sievers, Associate Dean of Policy and Practice at the Keough School of Global Affairs at the University of Notre Dame. Sievers began her address by joking that she was intimidated to be speaking after Tomasi and that, as a recent convert to Catholicism, she had only ever met her second Catholic priest when she started working at Notre Dame. It was precisely her academic research at Notre Dame, however, that posed the question of what it means when human dignity is not respected. Sievers’ research focused largely on Nigeria, which differs greatly as far as economics and human rights by region. Certain parts of Nigeria are doing quite well economically, while others are suffering greatly. One area that is particularly significant globally is the development of the Boko Haram, which developed in a more economically unsound part of Nigeria. “When people demanded justice and people had treated them with dignity, Boko Haram would not have risen,” Sievers said with conviction. Sievers concluded her address quoting the Gospel of Matthew, speaking on how we will be judged by how we treat the most vulnerable.

Concluding the panel discussion was Deputy Dean of the College of Business at Cornell University, Christopher Barrett, who began his address by confessing he follows “progressive economics.” Barrett explained that progressive economics refers to the preferential option for the poor. He then went on to quote Theodore Schultz’ Nobel speech address; “Most of the people in the world are poor, so if we knew the economics of being poor we would know much of the economics that really matters.” Barrett then went on to address trade. Diversity is essential in facilitating exchange, he said, because if everyone is like me, there is no gain from trade available. Not only must trade be expanded, said Barrett, but the poor must be empowered. As it stands, very poor people cannot afford a good diet for their children. Stress–which typically accompanies financial problems—also causes the release of cortisol, which inhibits cognitive functions and productivity. The key entitlement people need? Labor power. That is why Barrett said, slavery is the most egregious of sins in human society. None of us can produce everything we can hope to consume, so ultimately people get ahead through an exchange.

The three speakers had one major theme in common: the dignity of the poor. Pope Francis wrote in Evangelii Gaudium, “Each individual Christian and every community is called to be an instrument of God for the liberation and promotion of the poor, and for enabling them to be fully a part of society. This demands that we be docile and attentive to the cry of the poor and to come to their aid.” This well-attended event certainly offered solutions to the problems within society, the tone was certainly hopeful that there will be a change in the future.#NewYorkEncounter