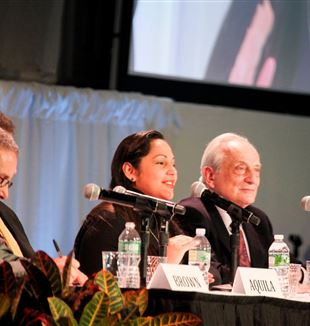 On Saturday morning, the Metropolitan Pavilion’s audience listened in on powerful reflections on fatherhood, reflections which considered the figure of the father from diverse points of view. The panelists gave clear and essential judgments on the importance of fatherhood for all aspects of life, judgments which stand in sharp contrast with the current American cultural climate. “The Father: Who Is He?” reaffirmed the essential role of fatherhood at a time in which large swaths of American society seek to overcome such structures and to press on toward greater freedom.

Steven Brown, vice provost and dean of graduate studies at the Catholic University of America, introduced the theme of fatherhood with a short but poignant personal witness. “What is a father?” he first asked the audience, but then restated the question in more personal terms: “How did I learn to be a father?” For Brown, the experience of fatherhood has been first and foremost beautiful, but also humbling. Especially through the relationship with his fourth son Carlo, who was born with Down Syndrome, Brown learned to leave behind the idea that he could and should determine his children’s paths. For Brown, to be a father means to accept what is given and to accompany his children along paths he did not choose for them. 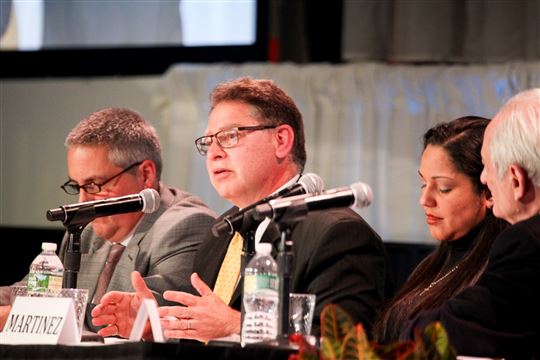 The first panelist was Paul Vitz, professor emeritus of psychology at New York University. Vitz spoke of scientific findings in both psychology and anthropology which highlight both the essentiality of the father’s presence for the rest of his family and the negative effects that his absence has on it. Research shows that children who grow up without a father have a significantly higher chance of engaging in violent and criminal behavior as well as in drug use, to have lower cognitive skills, to drop out of school and to be unemployed. Daughters, in particular, are more prone to mental illness such as depression. The father’s presence seems to have the opposite effects. In addition, fathers play an essential role in the formation of children’s gender and social identities, self-esteem and religious and spiritual lives. Vitz concluded by highlighting the Church’s role as mother. She teaches us that we are all children of God and puts forth many figures to be mothers and fathers to us: Mary, St. Joseph and the saints, as well as the members of our communities can be mothers and fathers by accompanying and reminding us of our filial relationship to God.

Dominic Aquila, professor of history at the University of St. Thomas in Houston and father of eleven children, spoke of his and his wife’s decision to homeschool their children in order to live fully the roles of parents as educators. The decision to take responsibility for his children’s education came out of his desire to live the Church’s call to subsidiarity. Aquila also emphasized the importance of community for childrearing: children learn not only from their biological parents but also from others who become fathers to children in their communities, such as priests, mentors and coaches. 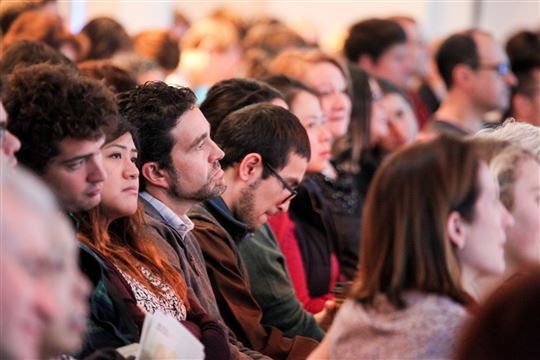 This experience of “non-biological” fatherhood, for lack of a better term, is precisely what Camil Martinez, a Ph.D. candidate in supply chain and logistics at the R. H. Smith School of Business, witnessed to. “I am here to speak as a daughter,” she said. “And Fr. Lorenzo Albacete was my father.” Martinez’s moving witness showed the unconditional nature of a father’s love. She recounted the experience of her first Confession with Msgr. Lorenzo Albacete as one occasion of this experience of love. As she began to tell him her sins, she kept her head down and did not want him to look at her. But, to her surprise (and annoyance), Albacete said things like, “Oh yes, I do that too!” after each of her sins. At the end of her list, she found an incomparable lightness: she had shown him all of her evil and was loved nonetheless. “Now that we have found each other accomplices in sin,” Albacete said, “let us be companions in redemption.” At the end of her witness, Martinez told the audience what she had learned from her relationship with Albacete: “The father is the one who teaches you to be truly free.”

It may seem at first that the question of fatherhood does not have much to do with the Encounter’s general theme of “An ‘Impossible’ Unity,” but the speakers show us that this is not the case. The father is a unifying figure in the lives of his children, one who shapes their identity as well as their relationship to the whole world. And if an earthly father can reconcile us to ourselves to the point of making us truly free, then how much more can we be one with ourselves in our relationship with the Heavenly Father? As the harbinger of unity, the father stands as a sign for the possibility of true freedom.#NewYorkEncounter