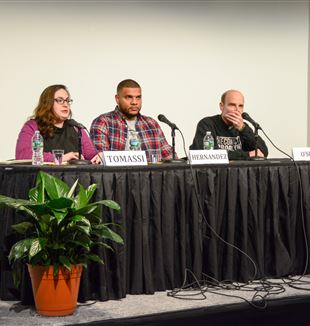 A Saturday evening event taking place in the second-floor auditorium was entitled, Reconnecting through Work and Education. The standing-room-only crowd consisted of a diverse group, ranging in age, race and profession. Rose Tomassi, a Communications specialist at St. Joseph High School in Brooklyn, N.Y., and an Adjunct Instructor of English at New York City College of Technology, moderated the discussion about Project ReConnect.

ReConnect Brooklyn was launched in 2010 by the Rev. Jim O’Shea, C.P., “as part of the organization with the goal of teaching entrepreneurship firsthand through the upstart of real businesses in the community.” Speaking alongside with O’Shea was Efrain Hernandez, the co-founder and associate director of ReConnect Brooklyn. 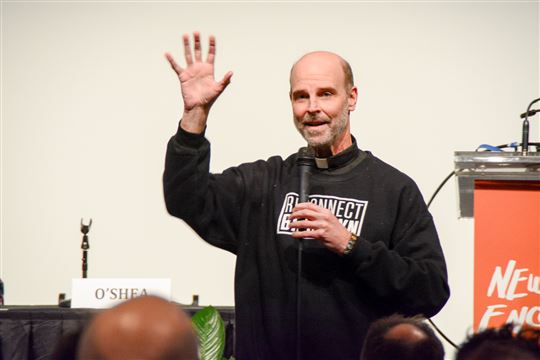 O’Shea, a Passionist priest originally from Rockville Centre, N.Y., had his first pastoral “jaunt” in a “tough neighborhood” in Brooklyn at a parish called Our Lady of Monserrate. Across the street, O’Shea saw a group of people sitting on a stoop who, upon seeing his approach, hid the liquor they had been holding. He struck up a conversation with them, which eventually lead to them asking to receive sacraments. However, a problem arose when they refused to cross the street to go into the church. Reflecting on this, O’Shea said, “Young people who think they can’t make it across the street sometimes make bad decisions. If you don’t want to leave the corner, we can change the corner.” And so, ReConnect Brooklyn was born.

The two-minute ReConnect Brooklyn promotional video was then shown. “We never saw a place in the world for ourselves beyond the corner,” an interviewee in the video began. ReConnect has opened a Cafe, Bakery, Education Center and Graphics Shop, all of which bring jobs to young men right in their own neighborhood in Brooklyn, promoting entrepreneurship and changing their stories and the community.

Hernandez took the stage after the video and shared why he wanted to begin ReConnect. Growing up in Brooklyn, Hernandez lived with his single mother who often worked, “So I wondered,” he reflected. Hernandez’ first job was at age ten selling fake raffle tickets for Save the Children, followed by years of buying and selling drugs. It was not until two of his friends were murdered and spending some time in incarceration that he realized that something had to change. Ever since starting ReConnect, Hernandez has tried to turn the ride for countless men in his neighborhood.

A success story Hernandez is particularly proud of is Jonathan, who came to work at ReConnect at age 18 after having been in prison since 14. He received training and is now a baker and “doing something positive,” Hernandez said with pride. “We just need the ripple effect to impact someone in his life.” 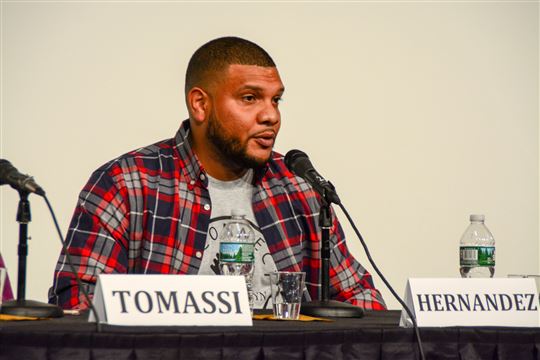 Another story of success that Hernandez shared was about Edwin, Hernandez’ adopted “little brother.” Even though Edwin wanted to start ReConnect earlier, he reached the age requirement of 18 staying disciplined and staying busy. “The more busy you are the less trouble you can get in to,” said Hernandez. Now Edwin is in training to become a firefighter.

“It feels good to help those who are less fortunate,” Hernandez reflected on his work at ReConnect. “When I was younger, I got people together to do evil things, which wasn’t the right thing to do. Seeing people do good makes me happy. Another income at home helps out your mom, your little brother. It makes me a better husband, a better father.”

Wrapping up the conversation, Tomassi asked O’Shea how his work over the past 20 years deepened his “yes” to his priestly vocation. “The Church has to have some impact on the community. … It’s not just words. Real things happen,” he responded with conviction. What allows relationship to become possible? “We get to know each other and we just build it.”#NewYorkEncounter