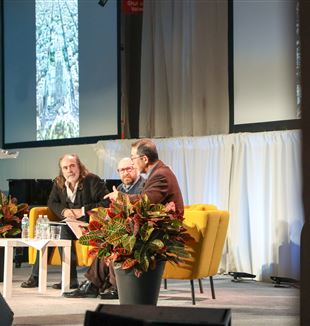 When I ran into Etsuro Sotoo at the 2018 New York Encounter, he was intensely perusing the panels of the exhibit detailing the life of Msgr. Luigi Giussani and his impact on young people today. The thought struck me that Sotoo is “another Giussani,” one so full of certainty in the reality and beauty of God in our midst that he is able to inspire young and old alike in a mysterious and inviting companionship with him. I reminded Sotoo that we had met previously at a presentation in Washington, D.C., during which my high-school-age daughter naively declared, after hearing him speak, “I have changed my plan! I want to be an artist!” This was ten years ago. Or was it nine years ago? After a few minutes of puzzling over the question, he ended it: “It doesn’t matter because friendship doesn’t exist in time and space. It is eternal!” Sotoo was perfectly at home at the Encounter–one of the few places on earth where an acquaintance of ten years ago could be acknowledged as an eternal friend.

This year’s Encounter was part of the long trajectory of his life’s fascinating journey. A native of Japan, he began his sculpture work at the renowned Sagrada Familia Cathedral in Barcelona not because he was religious or even because he admired the church’s designer, the artist Antoni Gaudí, but because “it was the place with the most chiseling work to be done. I found a mountain of stone. … But now I know that Providence brought me there.” Always following his passion for what he loves, it was also not a coincidence that he found himself a guest speaker at a cultural festival following the leitmotif, “An ‘Impossible’ Unity.” The man himself personifies the unity of many cultures, religions and world views–those he came from, those he embraced and those he explores. 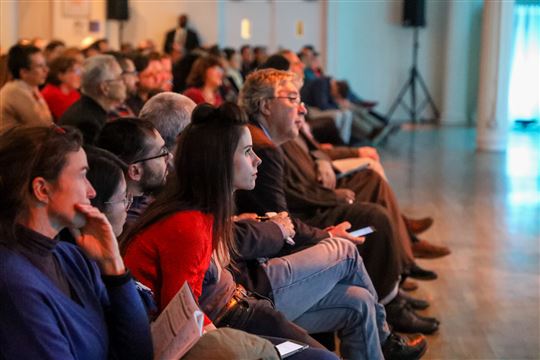 How fitting then for him to be introduced by the “eternal friend” of the Encounter, moderator John Waters, whose background reflects the same diversity of experience and exploration, the same unapologetic love for expression of the “real” and the same awareness of the Mystery through it all. Hand-in-hand with the theme of unity, this event was entitled, “An ‘Impossible’ Beauty.” A daunting task for most, unpacking this topic was entirely natural for these two guests. For the past 40 years, both Waters and Sotoo have had to fight to express and defend beauty–Waters with prose, and Sotoo with stones, exposing in their art forms the beauty inside of life. Indeed, as Waters reminded us with the words of Pope Emeritus Benedict XVI, Gaudí (and later his disciple Sotoo), “brought the sacred images outside so as to place before people the mystery of God. …” Gaudí’s method displays the connection between the beauty of natural things and God, who is beauty. The Cathedral’s external sculptures represent, as Waters expressed it, “our reality turned inside out, in a good way.” The church of John Waters’ youth, though not as grand as Sagrada Familia, was his “first book and first home.” Just as Waters’ hometown church was for him a place of education and hospitality, the Cathedral of the Sagrada Familia lead Sotoo, who at first “cared only about chiseling,” to a horizon much broader than he ever thought possible: the horizon of conversion, eternal friendship and infinite welcome. After the event, John commented, “He is a tremendous ambassador for the legacy of Gaudí and of his unique vision of the intrinsically religious character of the world. A poet, too, of course, a vocation defined for me by a sense of the limits of words. He knows how far words can take us (not to Heaven!) and has an even clearer sense of how the threads of reason are to be taken up thereafter, and ultimately it all converges on the secret language of Beauty.” By following the experience and vision of Sotoo, said Waters, we too can be “lead to what we are all meant for,” as my daughter had intuited so many years before.

Sotoo’s work, begun in 1978, involved restoration of the Expiatory Temple of the Cathedral after bombings in 1936. He became increasingly inspired as he grew familiar with the work and person of Gaudí. In fact, he labored for the first two years for a total of two months’ pay. He explains, “Art is not an object of investment, except the investment of the heart.” Ten years ago, after 30 years of sculpting at the Cathedral, construction halted because the plans for what remained to be done had been burned in a fire. Sotoo, chosen to lead the next creative chapter of the project but lacking the confidence to do so, prepared to return to Japan. However, he was visited by an inspiration which allowed him to find a way forward: “I realized that, following those plans and designs, I was always looking at Gaudí. Now, I thought, I must look at what Gaudí was looking at. …” Thus began a new phase in the building, and a new phase in the conversion of his heart. With the deepening of his relationship with the Mystery, Sotoo was able to design and create with the passion that only true openness and certainty can inspire. He discovered, “The best leader is the one who knows how to make a decision for beauty. Beauty is something beyond, the territory of ‘the above.’” 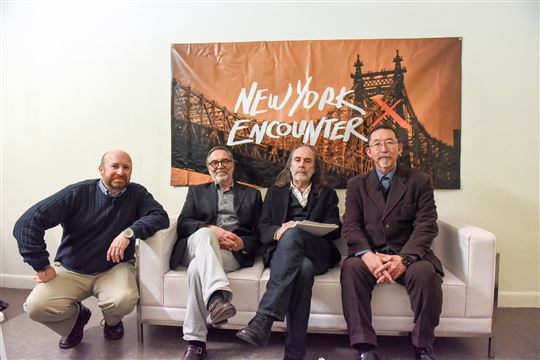 Showing slide after slide of his prolific and compelling works–which have included the completion of the Nativity Facade, the Door of Hope and the Door of Faith–he exclaimed, “All of this is from Someone, from the Holy Spirit who brought me here!” All of these sculptures were not made with instructions but, he insisted, they were made “the way God ordained that I should do it.” The truth of the words of Waters, “He has discovered the unity that is the theme of this event,” was made even more evident by his invitation to the listeners: “You are the ones who finish this work, you who observe and appreciate it.” All felt the impact of his enormous embrace, inside the cloak of his certainty: “Each of us is so beautiful, so complete … This is our patrimony: the beauty that God has put in our hearts!”#NewYorkEncounter