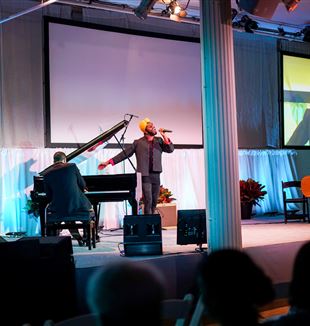 “Martin Luther King Jr. faced the problem of racial prejudice from the position of faith rather than justice exclusively,” said Elizabeth Peralta, who was inspired by King’s life while studying African American History in college. “The Civil Rights Movement was a gesture of a people who loved Christ, and whose pursuit of justice in our country was a consequence of having encountered His love.” Peralta and a group of friends thought that King’s life served as a witness to this year’s New York Encounter theme of “An ‘Impossible’ Unity,” not to mention the fact that the Encounter coincides annually with Martin Luther King Jr. weekend.

The presentation began with a series of video clips and images capturing key sermons and events in the Life of Rev. King, as well as testimonies of those who were influenced by his witness. Each clip was followed by the musical stylings of guitarist Philip Faconti, pianist Andrea Domenici and Grammy-nominated singer-songwriter Jonathan Hoard, who performed a repertoire of negro spirituals and gospel hymns.

After playing King’s “I Have a Dream” speech, Hoard led the crowd in a rousing rendition of the traditional spiritual Oh Freedom. Though “I Have a Dream” may be his most oft-cited speech, it seems to be the least understood by today’s social justice activists. King’s vision of freedom and justice in the United States proceeded from his experience of a greater freedom, a freedom that can only come from an encounter with our Creator in the flesh. 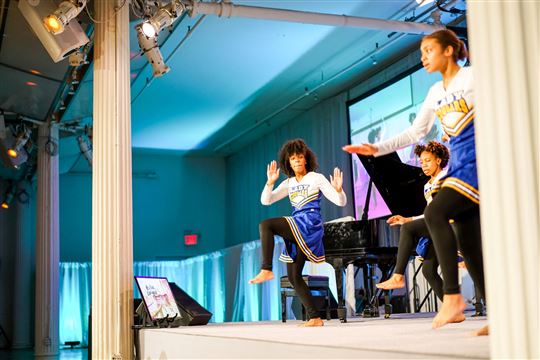 The second half of the presentation, a dance performance by the St. Joseph’s High School step team (known as the “Lady Conquerors”) sought to bring to light this dimension of King’s dream. “The greatest thing that has been lost from King’s legacy is that he was a man of faith. Our performance sets out to exhibit what so many people ignore,” said the director of the Lady Conquerors, Nichole Prime. Prime, who has stepped since her sophomore year at St. Joseph’s, has helped lead the team to victory in competitions within the Brooklyn Diocese.

Stepping, a form of dance which was popularized by black fraternities and sororities, has its roots in traditional African foot dancing. It has become common to find step performances combined with the recitation of scripture passages in Christian worship services.

As the Lady Conquerors stepped, they interlaced their vibrant routine with proclamations and exhortations that were related to King’s claim that, “We are all caught in an inescapable network of mutuality, tied into a single garment of destiny.” It is indeed possible for people across racial and social divides to be united, the girls exclaimed. But the promise of this possibility can only be rooted in the individual’s personal conversion toward Christ.

Though many fixate on political identities and social categories, there is something that goes much deeper than any of these labels. The human heart’s thirst for the redemptive and transformative love of God, in whose image each person has been made, cuts across divides of all kinds-a point which the Lady Conquerors emphatically demonstrated as they tore up “society’s labels,” which they had worn taped to their backs until that point in the performance. 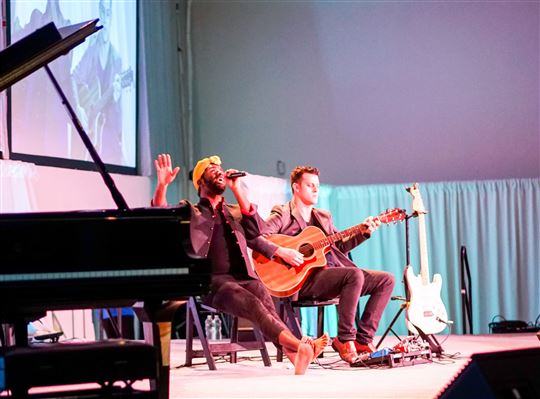 “They don’t know why we step!” interjected one of the steppers in the middle of the performance. “So why don’t you tell them?” responded another. “We step to tell you about our pain, to tell you our stories.” In this way, the performance brought King’s words about the transformative power of Christian charity to life. Inviting others to witness the transformation of one’s pain into a beautiful piece of art, more so than bringing one’s oppressors to justice, is one way we can be tied into the “single garment of destiny” of which King spoke.

Even as the performance was hopeful and optimistic, one cannot ignore the burdensome shadow that racial injustice casts on our country’s shared memory. Recently, there have been many calls for society to recognize the privilege that some groups have had and continue to have within this racial history. But is this an adequate response to the “race problem” that has plagued our country since its early foundations? The presentation tonight called for a different kind of recognition, or a rediscovery, rather, of what it means to be human. This call, far from ignoring injustices of the past and present, seeks a more promising future together, as King had dreamed.

Msgr. Luigi Giussani claims that, “The forces that change history are the same as those that change the heart of man.” Perhaps we need to take a closer look at the men and women who, like King, stood on the frontlines of the Civil Rights Movement. What was it that so moved their hearts to risk their lives for this cause? The origin of this movement may be the very source of the unity we lack in these times.#NewYorkEncounter