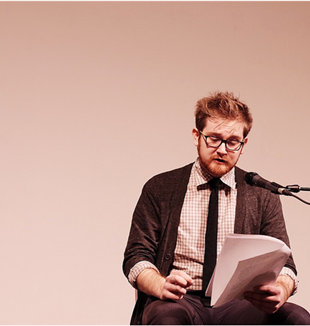 Reality beckons us to discover a promise within it. This path of discovery leads to the unveiling of a set of interconnected truths that present themselves in reality’s inherent order, ultimately inviting us to a relationship with the origin of reality, which corresponds to our original and most fundamental needs as humans. C.S. Lewis spent much of his literary career conveying these discoveries of his through a collection of works of literary criticism, Christian apologetics, and creative writing. One of his works, The Screwtape Letters, conveys the unfolding drama of one man’s relationship with reality by means of a collection of letters between a senior Demon, Screwtape, and his nephew, Wormwood.

Introduced by Marcie Stockman, founder of the Well-Read Mom book club, and presented by Dr. James Como, founder of the New York C.S. Lewis Society, this reading of Lewis’s classic work provoked the audience to face that sometimes we humans struggle to accept reality in its simplicity. Having fallen in love with Lewis’ writings while teaching undergraduate students at a public university, Como was incontrovertibly attracted to Lewis’s ability to argue a point through a pure obedience to reason. He recalled how “the color of his landscape was changed” after his first encounter with Lewis. “I needed to know about this man.”

Como began by reading an excerpt from a lecture given by John Henry Cardinal Newman: “Let us take things as we find them: let us not attempt to distort them into what they are not… We cannot make facts. All our wishing cannot change them.” 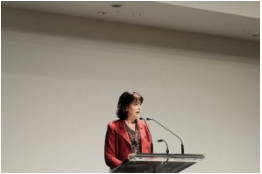 It is through this temptation to “distort” things as we find them that the demons Screwtape and Wormwood seek to win over “The Patient,” the unnamed protagonist of Lewis’s epistolary satire, to the side of “Our Father Below.” Como pointed out that Lewis’s insistence on the existence of the devil and his “tricks” earned him some attention back in the early 1940s –most prominently on a Time magazine cover which depicted him with a cartoon devil perched on his shoulder. The devil, claimed Lewis, pays close attention to us and goes out of his way to distort our relationship with reality as it is given. Lewis attributes the givenness of reality to the work of the Creator, who Screwtape calls “the Enemy.”

The idea came to Lewis during a Communion service at Holy Trinity Church in July of 1940. When asked how he was able to express the intricacies of temptation and sin so precisely, Lewis responded, “That’s easy, I just had to look at my own heart and mind.” This work was a reflection of his continuous battle to maintain the purity of his relationship with reality and to avoid falling into the devil’s “tricks.”

The Screwtape Letters were brought to life by actor Jacob Donaldson, who read several excerpts from the 31 letters exchanged between Screwtape and Wormwood. One in particular that resonated with the theme of the Encounter this year was the fifteenth letter, in which Uncle Screwtape tells Wormwood: “Our business is to get them away from the eternal, and from the Present…for the Present is the point at which time touches eternity.” Reality as it is given in the present moment is the place in which the promise of eternity reveals itself. “Of the present moment, and of it only, humans have an experience analogous to the experience which our Enemy has of reality as a whole…” Screwtape makes it his business to fix the Patient’s attention on the future rather than the present. “It is far better to make them live in the future…it is unknown to them, so that in making them think about it we make them think of unrealities. In a word, the future is, of all things, the thing least like eternity. It is the most completely temporal part of time.” Only in the present can the possibilities of love and happiness be realized: “Gratitude looks to the past and love to the present; fear, avarice, lust, and ambition look ahead…We want a whole race perpetually in pursuit of the rainbow’s end, never honest, nor kind, nor happy now, but always using as mere fuel wherewith to heap the altar of the future every real gift which is offered them in the Present.” 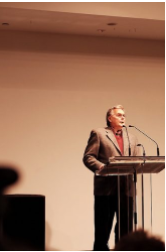 “Must have been some Communion service!” quipped Como after the reading of The Letters. Como remarked that he was moved not only by Lewis’s rhetorical genius, but also by his ability to communicate complex human dilemmas with simplicity, wit, and sincerity. He concluded the presentation by reading one of Lewis’s lesser known poems, “The Late Passenger.” In this retelling of the story of Noah’s Ark, Lewis once again hints at the promise that lies in the current reality as it is given, despite our anxiety that it might betray our hearts’ original expectations. Ham and Japhet hear the knock of an animal that is “belated and unmated.” Disgruntled by the inconvenient circumstances of this last animal’s arrival, they refuse him entry and disregard their father’s command to welcome him aboard. After this mysterious last animal runs away, Noah bemoans the ignorance and closed-heartedness of his sons, for because of them, “the Ark must sail without the Unicorn.” Could it be possible that the most inconvenient of circumstances and dimmest of moments could in fact be an opportunity to encounter the presence of an eternal promise? Uncle Screwtape would have us believe that this is impossible! But the witness Lewis’s life would beg the contrary.#NewYorkEncounter