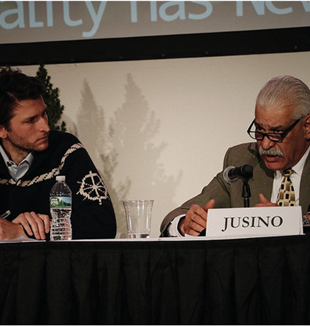 The “Never Lose Infinite Hope” event on Saturday evening at the New York Encounter was accurately billed — “Stories of reconciliation with life.” A profound moment of reflection set in when those gathered recognized at the outset that the keynote speaker, Detective Steven McDonald, had passed away only a few days before. McDonald’s own reconciliation with life, with reality, occurred with his much publicized pardon of the 15-year-old assailant who, in 1986, left this young newlywed officer (and soon to be father) paralyzed from the neck down in Central Park. The remaining 30 years of his life, shared with wife Patti and son Conor, was marked by public speaking engagements focused on forgiveness and reconciliation, nonviolent conflict resolution, and other inspiring lived experiences, as well as a book project realized in Why Forgive, published in 2014. Cardinal Timothy Dolan had heralded Detective McDonald’s holy heroism just an hour before at his own speaking engagement focused on American saints and their relevance in our lives.

McDonald’s absence left his co-panelist, Dan Jusino, a former gang member, in the position of picking up the ball where forgiveness left off. Event moderator and Yale Ph.D. candidate Tommaso Bardelli, who works with Jusino at his workforce development enterprise, EMERGE, introduced him as one whose vision, like McDonald’s, “is dominated by hope and not fear … a work deeply relevant for the life of the world.” Jusino, humbled by the mere association with McDonald, solemnly included the detective in this declaration that forgiveness is a universal necessity; the deceased detective is, he said, “a loving example not just for the police and for New York, but for all the world.” Both have been hard at work for the past 30 years forging a culture of forgiveness, and this will remain their common bond.

For Dan Jusino, after his own incarceration for a violent offence, love was the starting point, the midpoint, and the endpoint of his own healing, and he insists it is the key to a productive intervention for ex-offenders seeking to re-enter society free of the chaos of poverty and the slavery of crime. He shared that in the past two years, 2,000 people have come through the doors of his EMERGE facility in New Haven, Connecticut, but only 237 have made it through the program, which is no longer geared solely toward job placement. “There is no evidence that job placement keeps people out of jail. The evidence lies with people who change, people who learn to value themselves, to love themselves.” And this is another work altogether. There are many components Dan Jusino has discovered to be essential in going forward toward healthy engagement in reality. Jusino catalyzes the first and most essential forgiveness step at the outset of every interview with an apology. He himself apologizes to the new client for all the childhood abuse and neglect, the misleading promises, the failed relationships, and everything that may have contributed to a dissipated, hopeless, and eventually criminal lifestyle. 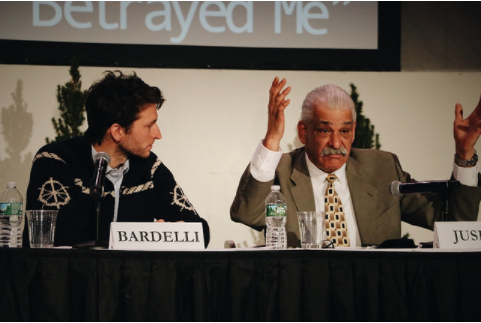 Dan Jusino came to understand the power of forgiveness and his own good purpose after incarceration and addiction when he “learned the 12 steps.” He started to live again through a mentor who showed him how to build a true and meaningful relationship. A survivor of childhood abuse as well, there is no challenge Jusino does not understand or relate directly to among the men who come to the center for help. In explaining his commitment to the work at EMERGE, he simply states, “This is not a job for me.” Later on, talking more personally, he clarifies what the men at the center mean to him, and what he is able to share with them: “They do more for me than I do for them. Just as happened to them, God’s grace interrupted my death, and allowed me to have a second chance. When we don’t learn things, God puts them back in front of us again and again. For example, I was a lousy dad, but I am a wonderful grandfather! The seeds my dear mother planted in me were finally allowed to grow, and I believe she is watching over me now.”

Another key component to the EMERGE program is the Friday 7 am “Real Talk” session, in which participants are able to have difficult discussions freely in a safe, non-judgmental space about many things, such as unresolved childhood experiences that have influenced thought and behavior. As Dan reminds us, quoting Socrates, “A life unexamined is not worth living.” Exploration of forgiveness continues to be central to understanding what a real giving relationship might look like. About these sessions, Dan observes, “The therapeutic merit of people helping each other is invaluable and unparalleled. They hold each other to very high standards! The friendships that result are the paradigm for those they can start to build outside our center.” Dan uses various other vehicles in his enterprise such as work readiness training and economic sustainability education, mandatory weekly parenting training (even for those who are not fathers), life coaching, learning to connect with volunteer networks, and more.

Most impressive to Bardelli is Jusino’s insistence that all clients must “stay in the moment.” Jusino explains that the work of saving lives is not like making widgets, or cars … it is not easy. He is tough on those who succumb to the temptation to play the victim or to blame others. “And I am aware that when they come to us, they may not have eaten and that where they will sleep that night is in question. But this anxiety is not enough to not be in the moment. All this is about healing.The only time we can change the direction of our lives is in the moment. And healing is about teaching people to love — themselves and others.” Throughout his talk, Jusino’s voice broke when he discussed the dire challenges his men are facing, and the mercy of God who comes to meet them within every moment.

While Jusino enlightened the audience with staggering figures, such as the fact that 92 percent of their clients have been incarcerated, and 80% live 200 percent below the poverty level, in homes with an income of $8,000 per year, he insisted, “This is not about numbers. It is about bringing the hope we have to the people who come to us. They are broken.” These words profoundly illuminate another presentation at the 2017 NYE, entitled: “There is a crack in everything. That’s how the light gets in” (Leonard Cohen). With Dan Jusino, we can learn to embrace the brokenness, and celebrate the light.#NewYorkEncounter